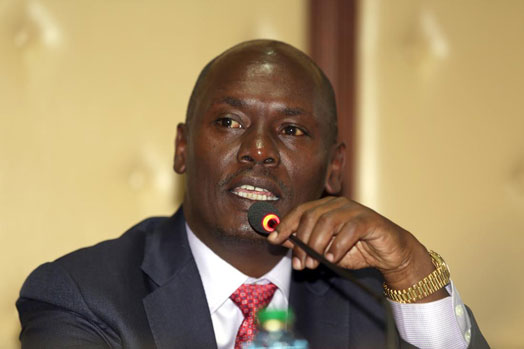 Kiambu Governor William Kabogo on Friday called and then hurriedly cancelled a press conference, fuelling speculation that he may have joined politicians who will defend their seats as independent candidates.

Mr Kabogo was among governors and other aspirants who lost in the nominations who gathered at Kigwa Conference Hotel in Kiambu for a closed-door meeting.

Since he dramatically conceded to Ferdinand Waititu , Mr Kabogo has kept a low profile, telling journalists that he had taken some time to consider his future.

He was among politicians who attended a meeting at Norfolk Hotel in the city recently where the idea to have those who lost in the nominations work together under the banner of “Jubilee Independent Candidates”.

Sources said the idea was introduced after some of the politicians met the top Jubilee leadership and were warned against coming up with movements parallel to the President Kenyatta’s party.

Other notable attendees were former Limuru MP George Nyanja, who lost in his bid to get the Jubilee ticket for the Kiambu Senate seat, and Tetu MP Ndung’u Gethenji.

Several other upcoming politicians who are seeking parliamentary and ward representative seats also attended the meeting in which they reportedly focused on the primaries’ outcome and the way forward.

Earlier, Mr Kabogo’s communication team had invited the press with the indication that after being handed one of the biggest defeats in the Jubilee Party primaries, the governor was looking to bounce back and was to make a major anticipated political announcement.

However, the team sent another communication indicating that the press conference had been cancelled.

Most of the aspirants from the Jubilee strongholds who were beaten during the primaries have defied President Uhuru Kenyatta’s plea that they concede defeat and support their winners.

The disgruntled aspirants have been citing unfairness during the process and some are teaming up to ensure Jubilee candidates lose.

William Kabogo calls then cancels press conference Reviewed by samrack on May 13, 2017 .