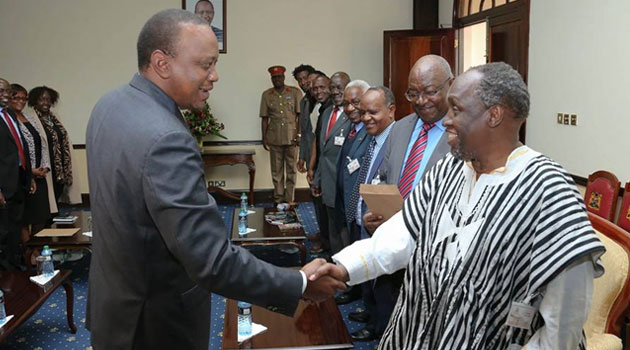 President Uhuru Kenyatta hosted Prof Ngugi Wa Thiong’o at State House, Nairobi, where he told the renowned author it was now time for him to come back home.

The President said Kenya has changed into a land of opportunity and Kenyans with skills should come back to invest in its future.

“This is not the Kenya of yesterday but it is a Kenya that needs all your talents. It is time for you to come back and help us build the country,” said the President.

He said the country will be stronger when there is unity among its people and all citizens prioritise the common good.

“We need all Kenyans to participate in improving our society because no single person or community has the answer but as a united group we have all the answers,” said the President.

On his part, Prof Ngugi said he was happy with the changes going on in the country and the democratic space existing in Kenya’s politics. The meeting took place on Monday.

Prof Ngugi said a recent encounter he had with a Kenyan delegation representing President Kenyatta in Los Angeles proved to him that the Government has changed in how it deals with citizens.

“For the first time I met Government officials who were not talking down at the people but seeking out and engaging with respect,” he said.

He said the Los Angeles encounter and other experiences he has had while in Kenya has shown him that their is a changing attitude in governance.

“It is really a great feeling when you feel your Government is recognising and acknowledging you,” he said.

Prof Ngugi urged Kenyans to be united in building a stronger nation. “Draw from all the cultures of Kenya to build a leading nation. Nothing stops Kenya from being the leading nation in the world,” he said.

The Distinguished Professor of Comparative Literature and English at the University of California did not finish without urging President Kenyatta to champion the promotion of local language.

Prof Ngugi, who has advocated for vernacular languages to be taught in schools, urged the President to prohibit teachers from punishing students for speaking in mother tongue.

He said such practices were inherited from the colonialists who wanted us to be ashamed of who we are.

Prof Ngugi came to State House with three sons, all of them published writers, and officials of the East African Publishers.

Prof Ngugi and his sons presented copies of some of their books to the President.

The Professor also presented to President Kenyatta a souvenir picture from the 1960’s.

The picture was of founding President Jomo Kenyatta and his vice president Jaramogi Oginga Odinga.

The picture was taken in Gatundu where President Jomo Kenyatta had received donations from the people of Muranga going to the people affected by floods in Kano, Kisumu.

President Uhuru Kenyatta hosted Prof Ngugi Wa Thiong’o at State House, Nairobi, where he told the renowned author it was now time for him to come back home. The President said Kenya has changed into a land of opportunity and Kenyans with skills should come back to invest in its future. “This is not the