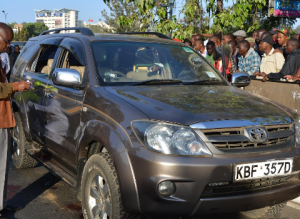 Detectives at the scene of crime where Kabete MP George Muchai was shot by unknown gunmen along Kenyatta Avenue and Uhuru Highway intersection.

THE carjackers who murdered former Kabete MP George Muchai have told police they fired because they saw one of his bodyguards reach for a gun.

They claimed were on a nightlong robbery mission and took an interest in the MP’s car only because they saw it parked.

They only made a paltry Sh6,000 all night, most of which they forced two women they had carjacked to withdraw from an ATM in Kikuyu town.

The suspects said they were on Uhuru HIghway heading to Lang’ata Road when they spotted the Toyota Fortuner parked on Kenyatta Avenue, police had earlier said Muchai was buying a newspaper.

They were in a carjacked Toyota Spacio when they saw Muchai’s vehicle just after getting into the roundabout at Nyayo House.

They decided to take one more turn on the roundabout to carjack and, or rob the occupants of the car.

One of them dashed out of their vehicle and when they got to within two meters of Muchai’s car he saw one of the guards preparing to shoot at him with a pistol.

But even before he started shooting, one of the thugs had warned his accomplices that vehicles occupants were dressed in suits like police officers.

It is at that point that the gunman opened fire and killed all four.

Yesterday the police presented the suspects – two women and four men – before a Nairobi court, where they were given permission to hold them in custody for 22 days.

The six were presented before principal magistrate Benson Nzakyo.

Prosecutors Duncan Ondimu and Chief Inspector Robert Kyaa told the magistrate the suspects are being investigated for a series of robberies, including the murder of Muchai, his two bodyguards and driver.

The police said Munyeria was armed with a G3 rifle and did all the killing.

The 28-year-old works as a tomato distributor at the Kangemi Open-air Market and is a father of one.

Mustafa Kimani, 23, works as a hawker in the Kangemi area. He is not married but has a girlfriend identified only as Njeri, who was not arrested by the police. He lives in a one-roomed house in Kangemi near the Adamanje Academy.

The man also does menial jobs in his neighborhood, such a carrying luggage and washing cars.

Thirty-five-year-old Raphael Kimani is the Kangemi butcher found with a Ceska pistol stolen from one of Muchai’s guards.

He hails from the Rironi area but lives in a rented house in Waruku. He is said to be the driver of the Toyota Spacio carjacked from the two women in the Wangige area and which was used during the attack on Muchai.

Lipopo, a 35-year-old, had the role on the night of terror of beating up victims and robbing them.

He was arrested at a house in the Murera area of Ruiru, where he fled to after the MP’s murder.

He also operates from the Kangemi matatu terminus, where he sometimes works as a tout and also does menial jobs at the Kangemi market.

Jane Wanjiru Kamau, 25, is a mother of one and is married to Raphael Kimani.

Margaret Njeri Wachiuri is a 30-year-old mother of two and wife of Eric Isabwa Munyeria. She runs a vegetable kiosk near her house in Kangemi. Police found the G3 rifle used in the murder and seven bullets in her house.

Detectives familiar with the investigations said the police will not be investigating claims by three MPs who alleged Muchai was killed because of the wrangles at the giant workers’ union Cotu, where he had been a top official.

WHY WE KILLED MUCHAI, SAY FIVE SUSPECTS Reviewed by samrack on February 17, 2015 .