Why Kenya is the place to live, study and make money 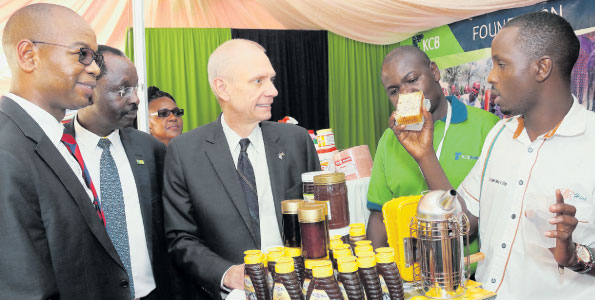 An entrepreneur talks to KCB chief executive Joshua Oigara (left), chairman Ngeny Biwott and US ambassador to Kenya Robert Godec during the launch of a Youth Empowerment Programme by the lender. PHOTO | JEFF ANGOTE

Why Kenya is the place to live, study and make money

From the blue waves of the Indian Ocean to the serenity of Lake Victoria, across the savannah of the East and the vistas of the North through to the breadbasket grasslands of the South and Great Rift to the fertile rolling hills of the centre and West, Kenya embodies exquisite topography and spectacularly diverse cultures.

Our cities boast splendid diversity as international melting pots with people from all over the nation, region, and world.

Inasmuch, in celebration of this, my 150th Business Talk column in the Business Daily, I appreciatively take the opportunity to enhance my annual Case for Kenya.

Why would someone born a foreigner live in and be willing to die for the Republic of Kenya? One simple answer represents the thousands of us who consider ourselves Kenyans by choice, not by birth: There is no place like Kenya.

But now the same curiosity beckons Kenya to push off the shackles of westernisation and chronicle its own unique path for the future.

The trend is starting to spread into our education systems and rural areas. Additionally, Kenyans exist as far more likely to share our true thoughts on any issue than most other sub-Saharan Africa nations who fear reprisals and cultural straight jackets.

Not only do Kenya’s often touted high literacy rates and growing university graduation trends make it a professional hub for the entire region, but also as a result Kenyans devour news.

Kenyans live as some of the most well-informed citizens on local, regional, and global affairs than anywhere else in the world.

Such faithful devotion to knowing current matters combined with our intense social media usage raises the level of public discourse on a wide range of social, political, and economic subjects that propel Kenya forward.

Nowhere in the world beats us in these four professional areas. Travel the world and one frequently finds Kenyans filling in such professions.

Our solid and growing tertiary education sector, our interactions with foreign professionals living in Kenya, and our own standards bodies all boost Kenya’s professional standing, skills, and sectors.

Our growing professionalism in medical care, information technology, and education has turned us into regional professional players in these fields but in coming decades could propel us to global competitor status.

Calm in the face of adversity

Kenyans also do not panic with uncertainty avoidance. Kenyans keep our heads down and get things done even in the face of adversity. In Europe or North America, unknown variables cause panic and unease.

The apprehension surrounding expectations of Kenyan election aftermath would cause people in most other societies to cease working and start hording, preparing, and planning for contingencies with debilitating effects on the economy.

That same fear of uncertainty led to the post-Y2K recession of 2000 and 2001 in the West and East. But, not in Kenya. We keep working and going about our economic activities right up to and even during adversity.

Kenyans respect human rights. While some Westerners chide us for a lack of human rights policies, we do remarkably better than comparative nations and at least it remains part of our national discussions.

Further, we beat most liberal nations on minority rights on an interpersonal basis. Take San Francisco as an example whereby the politically liberal city champions the rights of African Americans among other minority groups.

However, most people of African descent in the city report that no Caucasian people greet or befriend them. In Kenya, on the other hand, we bring our human rights home into our sitting rooms.

We may not agree with each other’s politics, attitudes, or behaviours, but we believe it is still their right to do as they wish and it will not stop us from befriending others different from ourselves.

We keep no erroneous capital controls like in other African nations such as Malawi, Zambia, and Rwanda over the past decade that limits investment appetite.

Entrepreneurship stands as an ever increasing acceptable viable career option not out of desperation, but from intentionality among graduates.

Our risk tolerance mixed with our professional skills both combined with our curiosity makes Kenya an entrepreneurship powerhouse. Look for more of the world’s next decade big ideas to come from right here in Kenya.

Why Kenya is the place to live, study and make money Reviewed by samrack on May 5, 2016 .

An entrepreneur talks to KCB chief executive Joshua Oigara (left), chairman Ngeny Biwott and US ambassador to Kenya Robert Godec during the launch of a Youth Empowerment Programme by the lender. PHOTO | JEFF ANGOTE Why Kenya is the place to live, study and make money From the blue waves of the Indian Ocean to