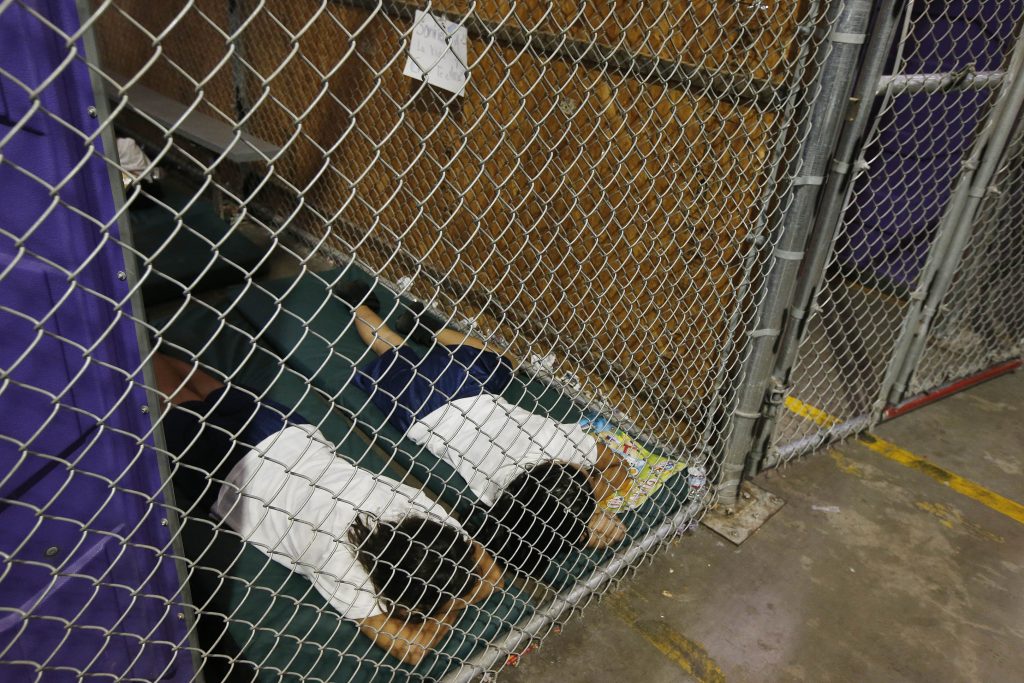 Last December, Mayra Machado was pulled over for a routine traffic stop in Arkansas. Turns out she had an unpaid ticket for failing to yield. And as a teen, she’d spent four months in boot camp for writing bad checks. Now 31, the single mother of three, who is an undocumented immigrant, faces imminent deportation to El Salvador, the battle-scarred country she fled when she was 5 years old.

Sylvester Owino, 40, said he survived torture in Kenya as a young activist and came to the U.S. on a student visa, which ran out. A 2003 robbery conviction in San Diego resulted in a nine-year stint in a detention facility. Now, he is part of a U.S. Supreme Court case that will determine whether immigrant detainees have a right to a bond hearing.

The two situations illustrate the variety of crimes that can get immigrants detained and deported, even after they have served a jail or prison sentence for the crime — and even if they are in the country legally. And while the federal government says it targets noncitizens who are serious or repeat offenders, immigrants with minor offenses often are deported.

Immigrants with criminal records may soon come under increased scrutiny. Republican President-elect Donald Trump has pledged to immediately deport “the people that are criminal and have criminal records.” There are, he said, “a lot of these people, probably two million, it could be even three million, we are getting them out of our country.”

Immigration advocates say those numbers are inflated, and point to figures that indicate most immigrants are being deported for minor crimes or for no crime at all.

First-generation immigrants commit crimes at much lower rates than do U.S. citizens. But for those who do commit crimes, it’s hard to get a clear picture of whether they are serious or misdemeanors, violent or nonviolent.

Since 2014, the Department of Homeland Security has prioritized deporting noncitizens who pose a serious threat to public safety or national security — and from October 2014 through September 2015, of the 235,413 people who were deported, 59 percent had criminal convictions.

But federal data on criminal deportees does not specify the crimes they’ve committed — or how many of them are undocumented. Technically, if someone is undocumented and entered the country after January 2014, they are considered a high priority for criminal deportation, even if they have committed no other offense.

Further complicating matters: what constitutes a “criminal alien” is not defined in U.S. immigration law or regulations, and is used broadly, according to a September report by the Congressional Research Service. A criminal alien may be someone who is undocumented or an authorized immigrant who may or may not be deportable, depending on the crime they have committed. He or she may be incarcerated or free, or have already served time.

“The federal government has these really overreaching laws on the books, laws that are very unforgiving for anyone who’s had any contact with the criminal justice system — even if you’ve never served a day in jail.”

Noncitizens convicted of an “aggravated felony” face particularly harsh penalties. Congress expanded the definition of the term since 1988 so that they can be deported for a crime that may be neither “aggravated” nor a “felony,” according to Joshua Breisblatt, policy analyst for the American Immigration Council, a pro-immigration research group.

Thirty offenses qualify as aggravated felonies, including theft, failing to appear in court, or offenses that most states consider a misdemeanor or do not criminalize at all, such as consensual sex between a 21-year-old and a 17-year-old, the group said.

Any new offense Congress adds to the list is retroactive. So a noncitizen can become deportable even if he or she already served the sentence for the crime years before.

When she was 19, Machado pleaded guilty to three felony counts: forging a friend’s name on a check, writing bad checks, and failing to appear in court.

Because of her criminal history, Machado is considered a “priority aggravated felon,” according to a U.S. Immigration and Customs Enforcement (ICE) official.

Machado, who considers herself “totally Americanized,” is in a detention facility in Louisiana. She is facing deportation any day now to El Salvador, a country where she said she knows no one and cannot read or write the language.

In 2014, President Barack Obama announced stepped-up deportation for “felons, not families.” At the same time, the Department of Homeland Security announced that it would be prioritizing deporting noncitizens who posed a serious threat to public safety or national security.

Research by immigration think tanks indicates that serious crimes committed by noncitizens are rare. The Migration Policy Institute estimates that of the roughly 1.9 million noncitizens who are eligible for deportation based on their criminal history, about 820,000 are undocumented. Of those, 37 percent, or roughly 300,000, were convicted of a felony, which can range from murder to attempting to re-enter the country illegally, said Faye Hipsman, an MPI policy analyst.

Another 47 percent, or about 390,000, were convicted of a significant misdemeanor, such as drunken driving. But what constitutes a misdemeanor can vary greatly from state to state, and can be anything from shoplifting to minor drug possession, Hipsman said, and sometimes people with low-level traffic violations get caught up in the deportation pipeline.

Advocates for limiting immigration, such as Jessica Vaughan of the Center for Immigration Studies, urge the incoming Trump administration to get tougher and scrap the practice of ranking crimes to decide who should be deported.

The policy, she said, “exempted too many criminal aliens from deportation and allowed for exemptions based on family ties.”

“All of that resulted in the release of tens of thousands of criminal aliens in the past few years,” Vaughan said. “Many of these individuals went on to commit more crimes, sometimes with tragic results.”

Many local law enforcement officials agree, although many of them ignore ICE requests to detain people without a court order for fear they could be found in violation of immigrants’ civil rights.

The sheriff of Rockland County, Texas, Harold Eavenson, said he has seen more than his share of immigrants committing crimes, including a hit-and-run homicide committed by a man who’d been deported and then came back.

“There should be no doubt at all that anyone who has a criminal history in this country should be deported,” said Eavenson, who is slated to become president of the National Sheriffs’ Association in 2017.

“I’ve seen illegals who have been deported seven or eight times,” he said. “The reason they keep coming back is they know there are no consequences.”

One way to get a glimpse into the types of crimes immigrants have been convicted of is to look at so-called detainers. Detainers are requests by ICE to local, state and federal law enforcement to hold noncitizens for possible deportation.

Half of the 95,085 immigrants targeted by ICE for possible criminal deportation in fiscal 2015 did not have criminal convictions at all, according to an analysis of ICE data by the Transactional Records Access Clearinghouse at Syracuse University. (TRAC has examined detainer requests issued between 2003 and 2015, which it obtained through the Freedom of Information Act.)

“The issue is, what do you do when you can’t find that many serious criminals?” she said. “We don’t want murderers and rapists in our midst regardless of their citizenship, but you have to find them.”

A detainer is the first step in a long process and does not always include complete details of a detainee’s criminal history, according to ICE officials.

Black immigrants are particularly susceptible to getting caught in the prison-deportation pipeline, said Wellek of the Immigrant Defense Project.

According a 2016 report by the Black Alliance for Just Immigration, a research and advocacy group, more than one in five noncitizens facing deportation for criminal offenses is black. Black immigrants also are more likely than other immigrants to be deported because of a conviction.

Back home in Kenya, Owino was a track star, representing his country in international competitions. He was well-known — and he was outspoken about police corruption and human rights violations, he said, and that made him a target of police. After he was arrested and tortured twice, Owino said, he applied for a student visa and started attending college in San Diego in 1998.

But 18 months shy of graduation, he said, the combination of alcohol and gambling, plus the breakup of his marriage and “bad memories” from his life in Kenya sent him into a downward spiral. Owino dropped out of school and ended up living in the streets — and overstaying his visa. He said he was hungry and desperate when he decided to rob a beauty salon.

“I forced myself and demanded money,” Owino said. “I was super drunk. Police caught me two blocks away.”

No one was hurt, but because Owino brandished a penknife during the course of the robbery, he was sentenced to three years in state prison. After serving most of his term, Owino was transferred to a detention facility, where he waited for nine years to be adjudicated for deportation.

Last year, an immigration judge released him on $1,500 bond. His case, along with that of other immigrants who’ve been held in detention for long periods, is before the U.S. Supreme Court. Oral arguments were heard Nov. 30. At issue is whether it violates the Constitution to subject immigrants facing criminal deportation to long-term detention without bond hearings.

For now, Owino works at a farmers market in San Diego, selling Kenyan food as he waits to hear his fate. He is worried about what will happen to him if he’s deported to Kenya. The police there, he said, have long memories. “They will kill me for sure.”

This story was produced by Stateline, an initiative of The Pew Charitable Trusts.

What crimes make immigrants eligible for deportation? Reviewed by samrack on January 2, 2017 .

Share thisFacebookTwitterPinterestEmailWhatsAppTwo female detainees sleep in a holding cell at the U.S. Customs and Border Protection (CBP) Nogales Placement Center in Nogales, Arizona, in this June 18, 2014 file photo. Photo by Ross D. Franklin/Reuters What crimes make immigrants eligible for deportation? Last December, Mayra Machado was pulled over for a routine traffic stop in