We found love in our 40s

Chris Lyimo and Wandia Njoya on their wedding day on July 30, 2015. They are both 46. By the time they met a year ago, they had long given up on marriage. PHOTO| NEVLIK PHOTOGRAPHY

We found love in our 40s

By the time they met a year ago, Chris Lyimo and Wandia Njoya, both 46, had long given up on marriage.

“The beauty about dating in your forties is that there is no time for playing games. We stated clearly from the beginning that we were dating on the premise that we could get married. There didn’t seem to be a valid reason to wait,” says Wandia.

Their unique love story culminated in a unique ceremony that had them both wearing jeans in a wedding aptly themed, “New Beginnings” to celebrate victory over their unhappy pasts, and to celebrate second chances. 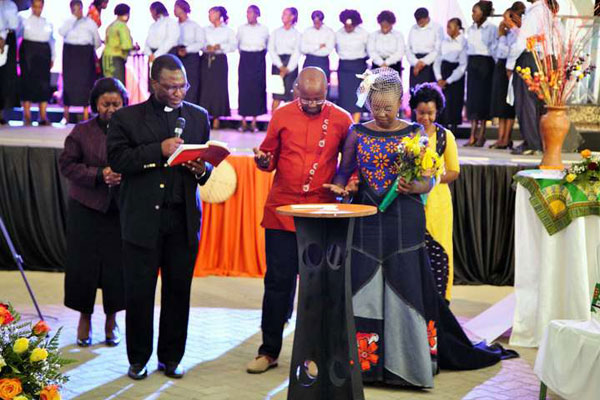 Chris Lyimo and Wandia Njoya at their wedding ceremony. Both wore jeans.

“I once told a friend that if I got married, I would do so in jeans, but he laughed me off and said I would have a very difficult time finding a woman who would agree to my idea. When I mentioned it to Wandia in passing one day while on a date, she told me it was a good idea, but of course, I thought she was joking,” says Chris, smiling at the memory.

Says Wandia, “He did not believe I was actually going to go through with it until we went to the tailor.”

On the wedding day, Chris was the first to walk down the aisle, with his mother and teenage son (from a previous relationship) by his side, which was by itself a unique act that ushered the couple boldly into a future they had previously thought impossible.

Chris, an addictions counsellor, blogger and creative writer, met Wandia Njoya, a lecturer, at a writing workshop at Daystar University, where she also teaches. A couple of weeks after the workshop, the two bumped into each other on a bus, on their way home after church.

“When the person seated next to her alighted, I quickly got up from my seat and sat next to her. We talked about everything under the sun during that short journey,” says Chris.

He had not really thought of Wandia as a potential mate, since he had long resigned himself to the idea of being single for life. A recovering alcoholic, his life was solely dedicated to helping people who were fighting the demons that had once tormented him.

Chris candidly talks about his experience in his book, My Side of the Street: One Man’s Journey from Alcoholism to Sobriety. He bares his soul about the immense pain of domestic violence, addiction, depression and growing up in a dysfunctional family.

At the time, his narrative about himself was that he was not man enough, not just because he did not complete university, but because his name was associated with the term “alcoholic” .

“I belittled myself. I told myself that I was a failure because I did not have impressive papers, because I am a recovering alcoholic, and because I do not live with my son, like other fathers do with their children.”

Chris shares custody of his son with the boy’s mother.

There was also pressure from extended family and friends to marry, even though he had not found the person to settle down with. This changed, though, when he met Wandia. The more he interacted with her, the more what he thought about himself changed.

People often told her that she was too bold, too outspoken and too educated (she has a PhD in French and African Literature) to have or keep a man, and she believed them.

“A past relationship crumbled just as I was beginning my master’s degree. Some people who knew me automatically assumed that my going back to school was the reason my relationship ended, even though that was not the case; it was one of those really bad relationships that simply had to end,” she explains.

After graduating with a master’s degree, she went to teach at Daystar University, where the then deputy vice-chancellor encouraged her to go back to school and study for a PhD.

For a fleeting moment, she wondered how this would affect her marriageability, but with the vice-chancellor’s encouragement, she applied to a university abroad and was accepted.

“As much as I wanted to further my studies, I also believed that my fate was now sealed. I thought to myself: Which man would want to marry me now?”

“The pressure to get married was mostly from myself, though, because my family never questioned why I was single.”

When she turned 39, she was diagnosed with breast cancer, something that took a toll on her self-esteem even more, and convinced her that no man would want her.

“I had a couple of surgeries which left my body scarred. Again, I wondered what man would accept a scarred woman. When I went to hospital for my first biopsy, I saw a poster that linked breast cancer with childlessness, which really hurt and made me feel as if I was condemned,” she explains.

Much later, it is Chris who would point out to her that her scars are evidence of victory over a terminal illness.

Her self-esteem had taken such a beating over the years that when Wandia graduated with a PhD, she would shy away from being introduced, or introducing herself by her title, Doctor, and would instead introduce herself as a “teacher”.

It was not until she listened to a sermon in church that she fully embraced herself, and her “womanliness.”

“In summary, the preacher said that we are women because God made us women, and that just because we don’t have husbands and children does not make us less of women.”

From then on, she put all her effort into her job, and resolved to become a happy single woman. Until that fateful bus ride with Chris.

Wandia called Chris one day, weeks after that bus ride, to ask him for a copy of his book. Her book club had decided to read an autobiography, and she wanted to suggest his.

Chris sent her his book, and waited with bated breath for her reaction, afraid of how she would handle the knowledge about his past, since his book was a tell-all.

“I had been judged and rejected before, and the feeling is harsh. To my relief, I did not get any of this from Wandia, instead, she simply informed me that she was going to do a book review.”

In it, she explored the subtle factors that people often take for granted in alcoholism; depression and masculinity, something Chris had never considered before.

Chris was stunned and touched by her insight into his life. A friendship quickly blossomed after this, one nurtured by exchange of numerous WhatsApp messages and going on a few plays and coffee dates.

He called her the next day and asked, “Would you be my girlfriend with the possibility of courtship leading to marriage?” 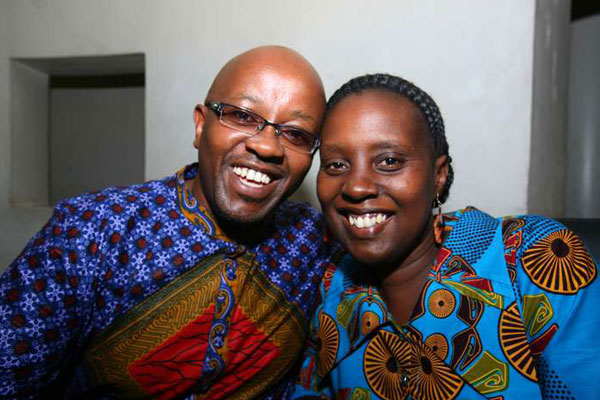 One month into their courtship, Wandia asked Chris to meet her father.

“Because of his troubled past, I wanted my father to meet and get to know Chris before he heard about him from anyone else. I had thought the meeting would be brief, but they ended up spending over seven hours together,” she says.

“As we parted later that day, Wandia’s father told me that he saw that I was mature. Later, when her family met mine, her father told everyone present that he had interviewed me, and that I had passed the interview,” Chris laughs.

The recurring question Chris’s family had for Wandia was whether she knew about his troubled past.

“I suppose they were surprised that she would love someone with a past like mine. But they were not alone…I couldn’t believe it myself. Perhaps that is why I broke down in tears just before the wedding ceremony. I could not believe how blessed I was to experience forgiveness, freedom, a new beginning and the love of such an incredible woman.”

“I had hoped to meet a man that would see past my scars and my PhD. Chris did. When he looked at me, he saw a woman.”

Wandia and Chris deliberately talk about their varying academic backgrounds and income, since they do not want it to be a barrier in their marriage.

“Wandia is more educated that I am, and earns more than I do – in our society, this is a huge challenge in some marriages. It is something we acknowledged during courtship, and found a way to deal with.”

To begin with, they decided that Chris’s income would go to their savings, while they would use Wandia’s income for their day-to-day expenses.

“We know that the world narrowly defines manhood by the property a man has, his education and financial status, but provision is not always financial, and going to school does not necessarily mean that you’re intelligent.

We talk through these things over and over again because we know people will keep throwing them back at us, so we need to make a concerted effort to face such scenarios boldly.”

They have been married for just a few weeks, but this challenge has reared its head a couple of times.

“I have been in situations where I’ve been introduced simply as “Dr Wandia’s husband” and I am okay with that,” says Chris, adding that although his wife sometimes shies away from her title, he keeps reassuring her that he is proud of her accomplishments, and that she should wear them proudly. 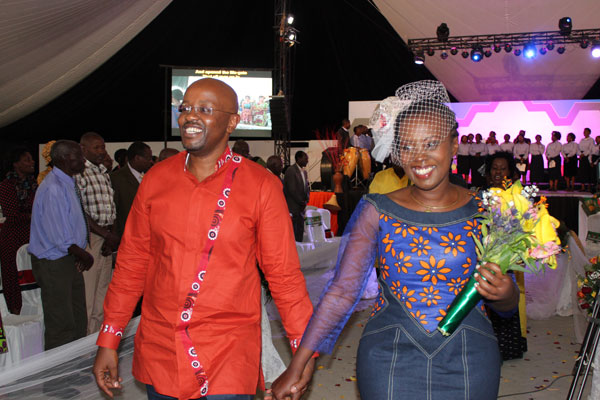 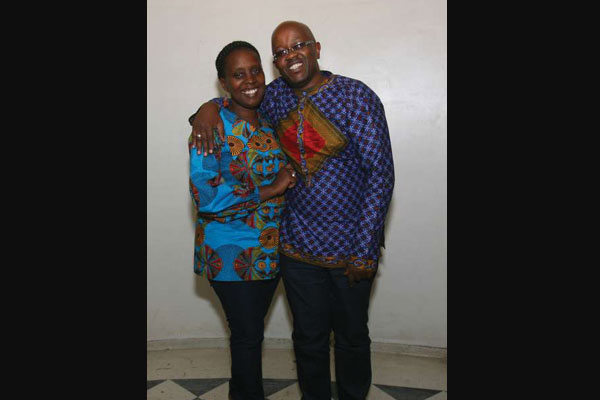 Chris and Wandia at the wedding ceremony. PHOTO| NEVLIK PHOTOGRAPHY

“Her intellect was one of the characteristics that attracted me to her, besides, she was already Dr Wandia when I met her, and when we started dating, I found that her knowledge was of great benefit to our relationship.”

The happy couple is in the process of setting up an initiative that will help people to let go of their pasts and embrace the second chance that life offers. Their marriage, they believe, is their second chance, their new beginning.

As for getting children, they will “let God’s will to prevail.”

Tags: We found love in our 40s
Previous Post