Wanted: If you see these men, please call the police now 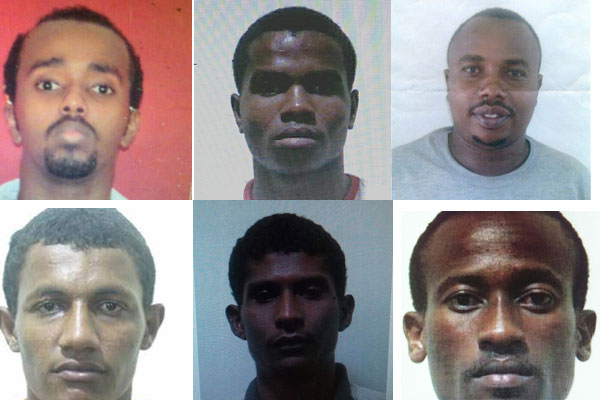 The government on Friday made public the identities of nine men who have been on a confidential report of wanted terrorists following the Garissa University College attack.

The government alert showed their photographs and appealed for the public’s help in arresting them.

Top on the list is Abdifatah Abubakar Abdi, aka Musa Muhajir, wanted in connection with last year’s Mepeketoni bloodbath.

“He is believed to be planning further attacks at the Coast. He is currently in Boni Forest with his associates,” the document says.

His associates are Suleiman Mohamed Awadh, Abdalla Salim Marumu, Mohamed Abubakar Mohamed and Muumin Abdalla Muumin, all from the Coast.

The report describes them as “bloodthirsty, armed and dangerous.”

Also wanted is Ismael Shosi Mohamed, aka Ismael Mmanga, who is a member of Al-Shabaab’s Mombasa unit known in the security circles as Jeysh Ayman.

“He is wanted along (with) others for the killing of Sheikh Mohamed Idriss, who was the chairman of CIPK Mombasa branch among other Muslim clerics and is also a main suspect in the killing of Mohamed Ibrahim, the CID officer who was murdered in Old Town, Mombasa,” the report.

Sheikh Idriss was a moderate cleric who was gunned down in June last year.

Mmanga, the report added, “is a bloodthirsty individual known for dressing up in a buibui while conducting his illegal activities.”

The others are Hamisi Mwacheti, aka Rasta, aka Bilal; Mahir Khalid Riziki; Abubakar Majani; Imsil Shosi; and Mahir Riziki.

Wanted: If you see these men, please call the police now Reviewed by samrack on April 3, 2015 .

Clockwise from top left: Muumin Abdalla Muumin; Suleiman Mohamed Awadh; Abdifatah Abubakar Abdi, aka Musa Muhajirm; Abdalla Salim Marumu; Mohamed Abubakar Mohamed; and Mahir Khalid Riziki. The government said it was hunting for these men, calling them “dangerous terrorists” on the prowl. The government on Friday made public the identities of nine men who have