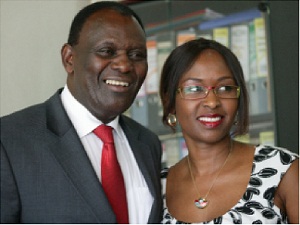 Police were Wednesday evening questioning a suspect they believe participated in the killing of Kabete MP George Muchai and his three aides in Nairobi on Saturday morning.

The man, a resident of Limuru aged around 40, was arrested in Kamandura by detectives from Nairobi. This is the same place where two carjacked women were abandoned and their car allegedly used for the killings. The car was later recovered in Ndeiya, about four kilometres away.

Security officers said the suspect may lead to more arrests. However, it is not clear if he participated in the attack.

The police, who include officers from Flying Squad and Directorate of Criminal Investigations headquarters, said they were pursuing more leads.

Postmortem examinations on the four bodies were conducted at the Lee Funeral Home in Nairobi. The results were not immediately released.

Muchai, police constables Samuel Montata and Samuel Kairingia, and driver Stephen Wambugu were shot dead at the Uhuru Highway-Kenyatta Avenue roundabout at about 2.50am on Saturday.

They were robbed of two pistols loaded with 30 bullets and a briefcase whose contents are still unknown.

Meanwhile, senators have condemned the manner in which security organs are investigating the killings.

They warned that such reports would jeopardise the probe and urged the Government not to relent on the matter but to keep some information confidential.

Wednesday, the families of the victims asked police to expedite investigations and apprehend the suspects before the deceased were buried on Friday.

Kiambu Senator Kimani Wamatangi, who spoke on behalf of the families, said they were eager to know the truth about the killings.

“We want those behind these crimes apprehended and arraigned in court, and convicted as per the law of this country,” he said at the mortuary.

A relative of one of the slain bodyguards, Exekiel ole Ketiapi, asked the Government to ensure justice was delivered.

According to police investigations, the four were killed by gunmen who had earlier carjacked and robbed two female motorists who were driving a Toyota Spacio in Gachie.

Muchai will be buried at his Kamulu home on Friday.

[VIDEO] Suspect Believed To Be Behind Muchai’s Murder Arrested In Limuru Reviewed by samrack on February 11, 2015 .

Share thisFacebookTwitterPinterestEmailWhatsAppPolice were Wednesday evening questioning a suspect they believe participated in the killing of Kabete MP George Muchai and his three aides in Nairobi on Saturday morning. The man, a resident of Limuru aged around 40, was arrested in Kamandura by detectives from Nairobi. This is the same place where two carjacked women were