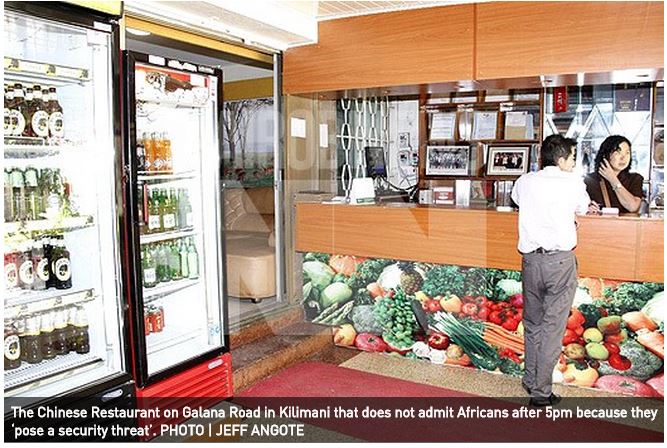 A Chinese restaurant in Nairobi, which does not admit Africans after 5pm, has been operating without a licence and owes the tourism regulator Sh227,000 in arrears.

According to the Tourism Regulatory Authority, the Chinese Restaurant has not been paying the annual Sh45,000 since 2011.

Yesterday, officers from the Tourism Regulatory Authority and Tourist Police stormed the premises in Kilimani and found that the joint had been operating without a valid licence, contrary to the tourism law.

The restaurant’s owner, Mr Zhao Yang, was arrested Monday morning and charged with operating a restaurant without a licence. He was released on a Sh50,000 bail and is to appear before a Milimani court on Thursday.

If convicted, Mr Zhao is liable to a fine of not more than Sh100,000 or imprisonment for a term not exceeding 18 months, or both. The restaurant was given until Thursday to pay the arrears.
Police stormed the diner following an exposé in the Nation that revealed that the restaurant does not admit Africans after 5pm, citing security reasons.

The Kenya National Commission on Human Rights said it intends to follow up the matter bordering on discrimination of Africans.

“We note from the report that there could be identifiable persons who have been aggrieved by the actions of the hotel,” said Ms Jackline Were, a human rights officer.

The commission has asked Kenyans who may have faced discrimination at the restaurant to make an official complaint.

READ:Nairobi Chinese Restaurant: Sorry, no Africans, we don’t trust them after dark

The public reacted to the story on social media with the hashtag #ChineseRestaurant, expressing their shock and disbelief. @CosKavinda tweeted “Whoever owns the #ChineseRestaurant should be escorted back to China just like a black (African) needs an escort after 5pm.”

@tegadwa said “That #ChineseRestaurant is not too dissimilar from the Kenyan story of discriminating against Kenyans of other tribes/races/religions.”

However, the management defended their ‘No-African after 5pm’ policy following a robbery last year, when six armed gangsters — Africans — robbed the restaurant and patrons at gunpoint and made away with Sh600,000.

The hotel added that its Chinese patrons felt safer and more comfortable if African patrons were locked out.

Dr Kidero, who described the restriction as outdated and unacceptable, said his administration had started investigations with the help of human rights organisations and the Ombudsman, to establish if the allegations are true.

“If we find that the allegations are true we shall have the licence of the restaurant cancelled immediately but we shall do this in accordance with the law,” the governor said through phone.

A team of Nation reporters that had visited the restaurant in Kilimani last week were told that African patrons are not allowed in after 5 pm.