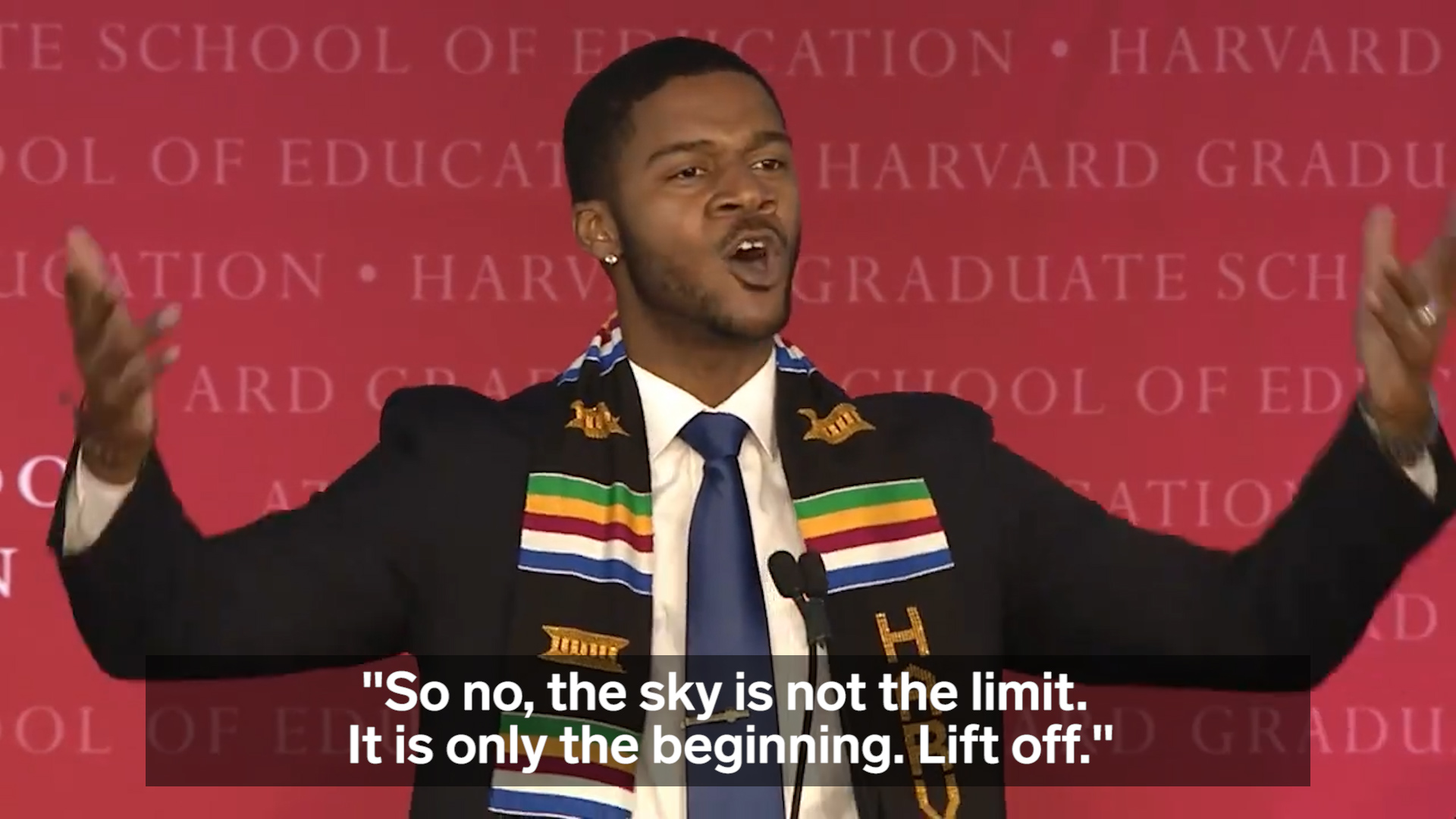 It’s the speech Harvard University is calling “the most powerful, heartfelt” speech “you will ever hear.”

Donovan Livingston, a master’s graduate at the university, was chosen by a committee of faculty, staff and students to speak at the School of Education’s convocation, a rep for Harvard told ABC News.

Instead of a traditional speech, Livingston used spoken word to perform his poem, “Lift Off.”

Livingston told ABC News that the “true inspiration behind the piece” was the fact that he couldn’t perform a poem when he gave his commencement remarks during his senior year of high school.

“The teacher who was in charge…threatened to take me offstage or cut my microphone when she caught wind that I wanted to incorporate a poem,” he recalled. “She wanted it to be traditional. So I complied, but I really wanted to address my class in my most authentic voice, which is what I said onstage Wednesday.”

The poem spoke about racial inequalities in the educational system, what it means to be black at Harvard and inspired the class of 2016 to use their roles as future educators to help others realize their full potential.

“I’ve been a black hole in the classroom for far too long;
Absorbing everything, without allowing my light to escape.
But those days are done. I belong among the stars.
And so do you. And so do they.
Together, we can inspire galaxies of greatness
For generations to come.
So no, sky is not the limit. It is only the beginning.
Lift off.”

The speech has been seen by more than 5 million people and was even shared by Justin Timberlake and Hillary Clinton.

Livingston — who hopes to become a faculty member or an administrator at a university one day — said he did not expect to get a standing ovation, nor did he expect the speech to go viral.

“My wife kind of did,” he admitted. “But I didn’t know it would be so well received. Whenever you put yourself out there especially with poetry, you’re making yourself vulnerable. However it was received, I would’ve felt great at the end of the day because I was being myself, but the fact that it blew up the way it did is a humbling experience.”

Livingston now plans to support his wife Lauren as she enters her second year of medical school at Wake Forest University and start his PhD program at the University of North Carolina at Greensboro this fall.

It makes sense for the son of two educators: His father is a retired principal and his mother is a speech pathologist, working with special needs students.

“I’ve always been around education, but I didn’t know it was something I was really passionate about until I got to college and looked around and saw … that everything I did catered to college access [and] college success. It felt natural,” the Winston-Salem, North Carolina, resident said. “I’m just really happy to carry on the legacy of my mother and father and I’m just grateful to walk in their footsteps.”

Read the transcript of his speech is here

VIDEO: ARTICULATE HARVARD UNIVERSITY GRADUATE’S SPEECH LIGHTS UP THE HALL Reviewed by samrack on May 27, 2016 .

Share thisFacebookTwitterPinterestEmailWhatsAppVIDEO: ARTICULATE HARVARD UNIVERSITY GRADUATE’S SPEECH LIGHTS UP THE HALL It’s the speech Harvard University is calling “the most powerful, heartfelt” speech “you will ever hear.” Donovan Livingston, a master’s graduate at the university, was chosen by a committee of faculty, staff and students to speak at the School of Education’s convocation, a rep