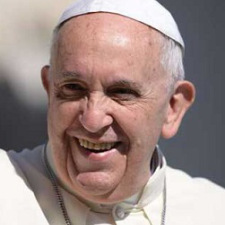 A delegation to conduct preparations for the arrival of Pope Francis is expected to jet into the country next week.

Although the exact date and the size of the delegation are yet to be communicated, the Papal protocol team will be welcomed to the country by Apostolic Nuncio to Kenya, Archbishop Charles Daniel Balvo and Nairobi Archbishop, John Cardinal Njue.

According to the Nyeri Catholic Diocese Archbishop, Peter Kairu, the delegation will oversee the preparations as well as discuss security matters with the relevant government organs.

Archbishop Kairu said the pope will be on a three-day state visit to Kenya.

“We are expecting him to arrive here on November 25 whereby he will be welcomed in the country by President Uhuru Kenyatta since he (pope) is the President of the Vatican,” he said as he rallied faithful from Othaya to arrive in big numbers and welcome the head of the Catholic Church in the world.

The archbishop said they are currently forming committees that will be spearheaded by archbishops and other senior people in the church based on the experience of heading other such big church events like the recent Beatification of the Blessed Sr Irene Stefani.

The committees are aimed at making sure the logistics for the preparations and the Papal stay run smoothly.

From the look of things, noted Archbishop Kairu, the Church is blessed and this is why they are asking the faithful to turn up in big numbers to welcome the Pope in Kenya.

According to Archbishop Kairu, they are yet to deliberate on their main agendas that they would want the Pope to address.

However, Fr Peter Githinji of the Nyeri Archdiocese, and who spearheaded the beatification of Sr Irene, said he would wish to see the Pope declare martyrs the 75 Catholic faithful who were killed by the Mau Mau due to their faith.

“Although we would like him to visit Gikondi in Mukurwe-ini where Sr Irene lived and died, our greatest wish is for him to declare the 75 faithful martyrs,” he stated.

The two were speaking at Karima Catholic Church during the tenth anniversary celebrations for Fr Joseph Waweru, the parish priest.

Vatican protocol team jets in next week ahead of Pope’s Kenya visit Reviewed by samrack on August 3, 2015 .

Share thisFacebookTwitterPinterestEmailWhatsAppPope Francis. Vatican protocol team jets in next week ahead of Pope’s Kenya visit A delegation to conduct preparations for the arrival of Pope Francis is expected to jet into the country next week. Although the exact date and the size of the delegation are yet to be communicated, the Papal protocol team will