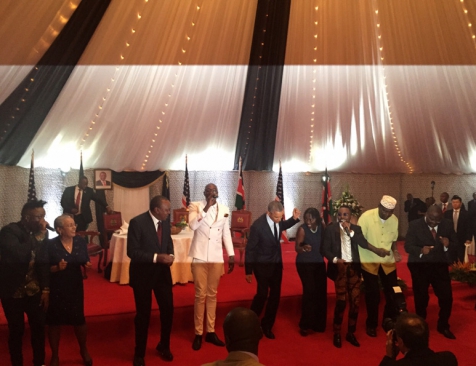 “Piga densi kidogo, Piga densi kidogo, ” (Dance in small steps, dance in small steps ) went the song, and all enjoyed themselves as Obama did it with such a swag charming many. He must have taken the dancing rhythm from the father Barrack Obama Snr, who hails from the Luo community, known for their dancing culture and music prowess. Many took out their smart phones to record the dancing, keen not to miss the momentous memorabilia. When the dance was done, there was a deafening applause from the guests, made of senior government official, Senators, Members of Parliament and the top businessmen, who got special invitations for the night. President Obama was obviously in a celebratory mood and he hugged the band members with a little chit chat as he went back to his seat. The evening ball was held at a specially erected white tent in the State House lush green lawns, covered in an all-red carpet with colourful lights, giving a warm ambiance as the guests enjoyed the evening dinner.
Read more at: http://www.standardmedia.co.ke/?articleID=2000170457