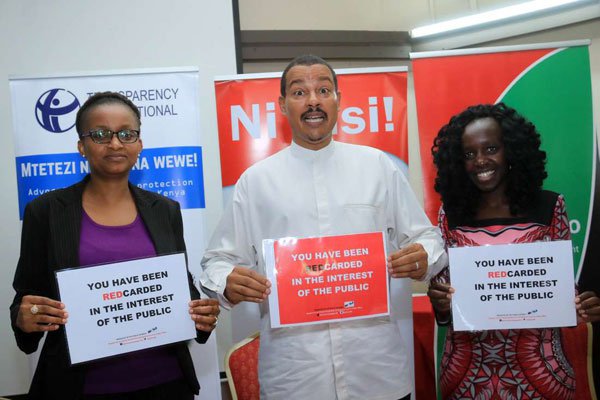 From left, Wanjiru Kanyiha of Inuka Kenya, Irungu Houghton of Society for International Development and Mzalendo Trust boss Jessica Musila during a press conference on April 11, 2017 where they told corrupt leaders not to vie for elections. Separately, a US lobby issued an assessment of the country’s readiness for the polls. PHOTO | JEFF ANGOTE | NATION MEDIA GROUP

An American lobby has issued a critical assessment of the country’s readiness to hold free, fair and peaceful elections and singled out five key issues which must be addressed to guarantee stability after the August polls.

The proposals by the National Democratic Institute (NDI) range from having rivals hold hands and publicly pledge to uphold the peace, to parties barring candidates who breach codes of conduct.

These recommendations are among five areas identified by the Nation as significant ahead of the General Election, which is in 117 days.

The American lobby said the electoral commission must build the trust of the public and the contestants in the Kenya Integrated Electoral Management System (KIEMS), as well as the manual back-up, to reduce disputes after the election.

“The IEBC should include technical representatives from political parties and civil society in each stage of testing and deployment of those systems, as well as in the training of election officials in their use,” NDI said in its statement.

The commission has already awarded the contract for supply of KIEMS to Safran Identity and Security after deciding that Gemalto SA, which seemed poised to win the bid, was too expensive.

The award came after an appeal to the Public Procurement Administrative Review Board was dismissed and the IEBC allowed to go ahead with the procurement, one of the many legal hurdles thrown in the way of the elections.

It was followed by bickering between supporters of Jubilee and those of Orange leader Raila Odinga.

KIEMS is meant to integrate voter registration on polling day and transmit the results. But with voters already registered, only their identification and results transmission remain to be integrated.

It will be interesting to see how this is done, given that voting and vote-counting is manual, which means that it is the information — the results of a manual process — that will be transmitted electronically.

NDI said: “The IEBC should develop a clear methodology with appropriate safeguards on the collation, verification and transmission of results, both through use of technology and manual systems.”

The National Assembly last week approved five sets of regulations on the management of the elections. Among the regulations is a detailed process of determining whether the electronic systems have failed and then using alternative methods.

The Opposition was behind the push for integration of the system and use of technology as it saw the manual system as a loophole for rigging.

It claimed this happened in the past two polls in which Opposition leader Raila Odinga lost to Mr Mwai Kibaki and Mr Uhuru Kenyatta, respectively.

The institute identified, after a series of meetings with key planners and stakeholders in the General Election, the conduct of nominations, scheduled to start next week, as one of the major points of concern because of the potential for violence.

Observers from the American institute said more disputes are expected from the primaries because of the intensified competition for county level positions — governors and Members of County Assemblies seats.

With experienced and influential politicians competing against each other for nomination by their respective parties in Kiambu, Nairobi and Kisumu, for example, the potential for violence is high.

The two big parties, ODM and Jubilee, have had to summon several aspirants to Nairobi to answer to charges of indiscipline after violent altercations over the election of members of the election boards and violence at rallies. Already, there have been deaths in Ruaraka, Nairobi, and in Busia.

NDI said: “Political parties should establish mechanisms to effectively enforce among their members the political party and electoral codes of conduct.”

It recommended that the Registrar of Political Parties should ensure that parties fully understand when disputes arising from nominations can be handled by the IEBC, the Political Parties Dispute Tribunal, or the courts.

“Given the extraordinary number of disputes anticipated, these entities should be properly resourced. In particular, the PPDT should receive additional funding and human resources to effectively carry out its mandate,” NDI recommended.

It said that “orderly and fair” resolution of disputes and those from the actual election would increase public trust in the courts. Prosecution would also curtail the potential for election-related violence.

The American institution identified a simple method through which candidates could ensure peaceful campaigns — getting them to make a promise to keep the peace.

It said the tactic had worked in many countries, with Nigeria and Ghana being the latest examples, where presidential candidates and key party leaders came together under the watch of respected religious, traditional, national and international leaders to make peace pledges.

“The positive impact on public confidence was notable. A timely action of that nature by Kenya’s candidates could be important for promoting peaceful elections and electoral participation. Such pledges in hotly-contested elections for governor seats could also make valuable contributions to the electoral environment,” NDI said.

It said these pledges would work when combined with forceful actions within parties to enforce them, with civil society monitoring whether they have been honoured. The Kenya Private Sector Alliance has been leading a similar campaign under the Mkenya Daima initiative.

President Kenyatta and would-be Opposition boss Raila Odinga were among presidential candidates who made similar pledges ahead of the last elections, one of the most peaceful in recent times.

The American institute also addressed the issue of parallel tallying of votes. “Typically, political parties and candidates will gather and add up results from official tally sheets, and the media and citizen election monitors may also gather copies of results as part of their verification exercises,” it said.

It said that political parties, citizen election observers and the media that independently collect election results from polling stations and tallying centres should act responsibly with their information and not usurp the role of the IEBC.

“The IEBC should guarantee access to counting and results processes. That includes providing security for party agents, media and election observers,” it said.

The question of how parties should handle the results they gather from their agents turned controversial over the past two weeks after Nasa co-principal Odinga said the Opposition would carry out parallel tallying. IEBC chairman Wafula Chebukati appeared to close the debate on the issue when he said last week that the commission was the only institution mandated to announce poll results.

NDI also said a number of people raised concern on misuse of State resources in campaigns. “The government and its resources belong to citizens and should not be expropriated for private gain or the advantage of a political party,” it added.

The issue arose again on Monday after President Kenyatta and his deputy William Ruto launched a website through which the achievements of their administration can be tracked.

This could be in breach of the law, according to the Election Offences Act, and could amount to misuse of public resources.

Share thisFacebookTwitterPinterestEmailWhatsAppFrom left, Wanjiru Kanyiha of Inuka Kenya, Irungu Houghton of Society for International Development and Mzalendo Trust boss Jessica Musila during a press conference on April 11, 2017 where they told corrupt leaders not to vie for elections. Separately, a US lobby issued an assessment of the country’s readiness for the polls. PHOTO |