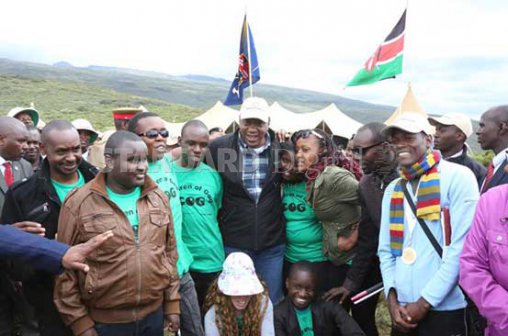 What was to be a memorable event for 98 youth on an excursion in Mt Kenya ended tragically after one of them died. The death was a blot on the trip that ended yesterday with participants from four African counties being received by President Uhuru Kenyatta at Old Moses camp in Timau.

Sarafine Wanjiru Njoroge, a student at Dedan Kimathi University of Technology (DeKUT) fell ill and died on the fourth day of the five-day excursion that started on Sunday. She died on Thursday. The President led the participants in a minute of silence in honour of Wanjiru, after he was called to address the gathering at Old Moses Camp which stands at 3,200 metres above Sea Level, within the expansive Mt Kenya National Park. The student was taken ill at Shiptons Camp which stands at 4,200 metres above sea level. The camp is situated at the base of the grand Batian, Nelion and Lenana peaks. Mt Kenya National Park Senior Warden Simon Gitau said she died of High Attitude Pulmonary Edoma (Hape). HAPE is a condition associated with high attitude complications, and it mostly strikes victims scaling high mountains. Wanjiru was among the Presidential Awards, Gold Experience group of students from various high schools and universities together with international participants. The youth from Kenya, Uganda, Ghana and Tanzania participated in the event. “Push on in memory of your departed colleague and honour her through the success that you will find along the way,” the President told the youth. See also: Leaders mourn former Cabinet Minister Ndolo Ayah Kenyatta was accompanied by Environment Cabinet Secretary Judy Wakhungu, Presidential Advisor on Education Kilemi Mwiria, the representative of The Duke of Edinburg’s International Award Edwin Kimani, Education Principal Secretary Berio Kipsang, Buuri MP Gatobu Kinoti and hotelier Wanjohi Waweru, who is also proprietor of the high attitude, Old Moses Camp. The President said the youth are well poised to create integration among all African countries. “The purpose of this exercise is to challenge you especially mentally, build your determination to succeed and show you that you can walk far when together. You have brilliant ideas which will help integrate this continent,” he said. The President said the challenges facing young people should be turned into opportunities, noting that coming together and exchanging ideas will help them overcome the drawbacks they face and build better lives. He said it was unfortunate that most youth give up on life after facing various challenges instead of fighting on. “Unfortunate as it may have been, we will all meet challenges in life. But it is also pertinent that you overcome them and move on,” said the President. The President’s Awards-Kenya is a self development and character building programme for young people aged between 14 and 24, and President Kenyatta is the patron. The programme aims at developing and driving quality programmes that equip young people with leadership qualities and life-long skills to inculcate core national values for responsible citizenship.
Read more at: http://www.standardmedia.co.ke/article/2000195381/university-student-s-death-dampens-president-uhuru-kenyatta-s-event