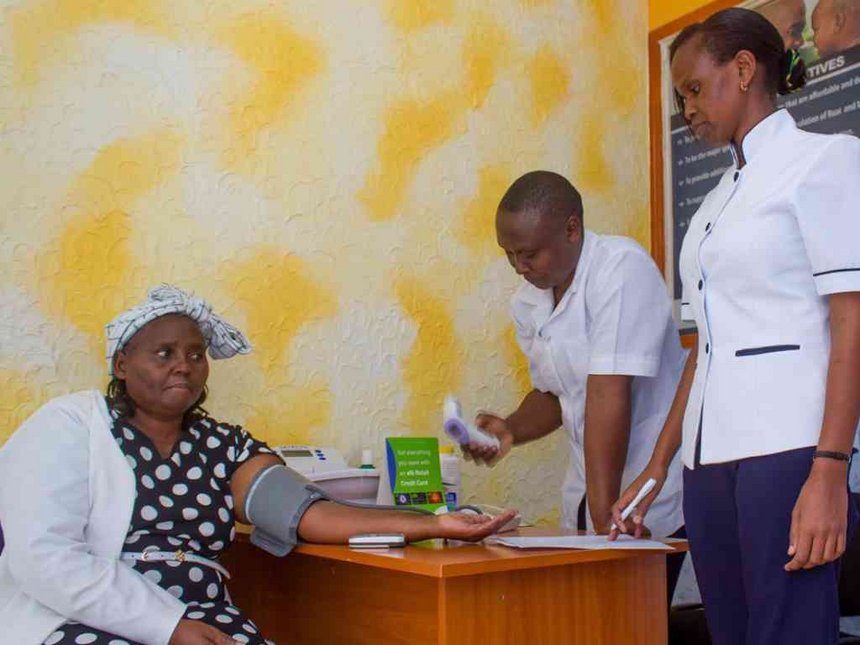 Some colours like restful green and calming blue are said to improve efficiency and also lend a sense of well-being.

Meanwhile, yellow is viewed as the shade of optimism. This is the premix that Dr Maxwell Okoth has chosen for the walls of Ruai Family Hospital.

The 29-year-old general practitioner and his team of medics and accountants spend most of their days here trying to unpick one of the knottiest problems in medical care: how to provide the highest quality services at the most affordable cost.

“It’s insane to pay Sh300,000 to give birth yet it’s a natural process. Labour should not leave you in debt,” Dr Okoth offers.

On his computer, reports chart each patient’s progress from the hospital back to a comfortable life at home. They assess some of the lowest possible cost to each service and all the problems that might arise and ways to handle them.

Dr Okoth is the proprietor of this hospital, a three-storey facility in Ruai township, in the outskirts of Nairobi. He is one of the youngest doctors in Kenya to own and run a full-fledged medical facility.

He founded the hospital in 2011, one year after graduating with a Bachelor of Medicine degree from the University of Nairobi.

He says they are a family hospital, providing all maternal and child health services “at the most affordable cost.”

“We are a family hospital, from our environment and the way we treat patients,” he says.

Dr Okoth founded the hospital as a small outpatient clinic in 2011 using a Sh300,000 loan from his mother’s retirement benefits.

“At that time I was interning at Kiambu District Hospital, so I employed some people to run the clinic. But I would commute daily from Kiambu to Ruai and sleep there. I slept in the consultation room. I also showered in the clinic very early the following day,” he says.

Okoth was posted to Nyeri as a medical officer in April 2012. In December that year, he survived a bad road accident but his saloon car was written off. The insurance eventually paid him Sh600,000.

“I agonised about buying another car but I decided not to. So I approached Crown Healthcare and acquired several medical equipment including x-rays, ultra sound machine and theatre equipment. We paid them Sh600,000 upfront and promised to pay Sh232,000 every month. I didn’t know where this money would come from,” he says.

Okoth is acutely aware of the shift in health-care since devolution, where counties have invested heavily to bring free services closer to patients.

This shift could potentially take away some business from the private medical practitioners.

Dr Maxwel Okoth outside Ruai family Hospital, which he owns

Okoth says the future belongs to facilities that provide the highest quality care and at the most affordable cost.

To achieve that, he always juggles between the stethoscope and the calculator.

He is a Certified Public Accountant (CPA-K) from Strathmore University and is currently pursuing a masters degree in health economics at the University of Nairobi.

The road has been bumpy and twice he took loans from Standard Chattered bank to clear debts for the medical equipment.

During the December 2013 doctors strike, he got some time to camp at the clinic and this is the point he realised the people he had employed were actually stealing from him.

They would under-report the clients they had served and many times he would go back to his pocket to get the clinic running to a point he was about to give up. But on the first day he camped there he saw 20 patients as opposed to the average six patients the clinic used to ‘attend’ to daily. “So I fired all of them,” he says, ” This was like a re-birth of Ruai Family Hospital. It’s always dark before dawn,” he adds.

His internship in Nyeri ended in 2014, the year he relocated his clinic. “I spoke with the landlord of this premises and he was very kind to us. I also convinced my girlfriend to sell her car. We used the cash to clear our debts and also partition the new building,” he says.

Okoth had also applied for Sh1.8 million loan from the Youth Fund. The funds were released in June 2014.

The Ruai Family Hospital now occupies all the three floor of the imposing building in Ruai Town. It is the biggest private health facility in the town.

“It has been a journey and we are now making ends meet,” he says.

They currently have 32 beds, 12 permanent employees and hire top doctors on need basis.

“On average, we serve 60 patients every day and we are listed with all major insurance companies in Kenya including NHIF,” he says. “We are a family hospital, from the environment and the way we treat patients. Everybody who works here has that dream. Businesses that survive are those that serve patients.”

He says they plan to build a trauma centre in the near future, in partnership with an Indian hospital.

Dr Okoth advises young people not to shun Youth Fund and other loans. “We always say I have a dream but no funds. It’s a lame excuse. If you want to do something start with the little you have. The society wants to see you what you have before they give you a loan,” he says.

“The uptake is good despite the current controversy. We have advanced Sh11.5 billion to 689,000 youth enterprises from 277 to date,” he says. “The repayment is also good.”

Odero says the fund, with support from the UNDP, is also training youths on entrepreneurship so as to manage their businesses properly. “The fund is there. Youths should visit our offices and take advantage,” he says.

Dr Okoth says no one should be afraid of loans, if they have a vision. “Don’t be scared of risks because the biggest risks have the biggest rewards,” he says.

Share thisFacebookTwitterPinterestEmailWhatsAppUniversity student, 29, builds Ruai’s largest medical facility Some colours like restful green and calming blue are said to improve efficiency and also lend a sense of well-being. Meanwhile, yellow is viewed as the shade of optimism. This is the premix that Dr Maxwell Okoth has chosen for the walls of Ruai Family Hospital.