The Infotrak poll which has placed Raila ahead of Uhuru. Photo: Infotrak.

Uhuru would beat Raila by a slight margin, a new poll has shown – The Ipsos survey indicated Uhuru has a popularity rating of 47% against Raila’s 44% – This poll comes the same day as that of Infotrak Research and Consulting which indicated Raila would beat Uhuru by 49% against 48% A second opinion poll released on Tuesday August 1 has put President Uhuru Kenyatta ahead of Raila Odinga. If elections were held today, he would lead with 47% of the votes while Raila, the NASA presidential candidate would get 44% of the votes. This means there would be a run-off between the two since the law requires a winner scoops 50% plus one of the total votes cast during the first round of voting. 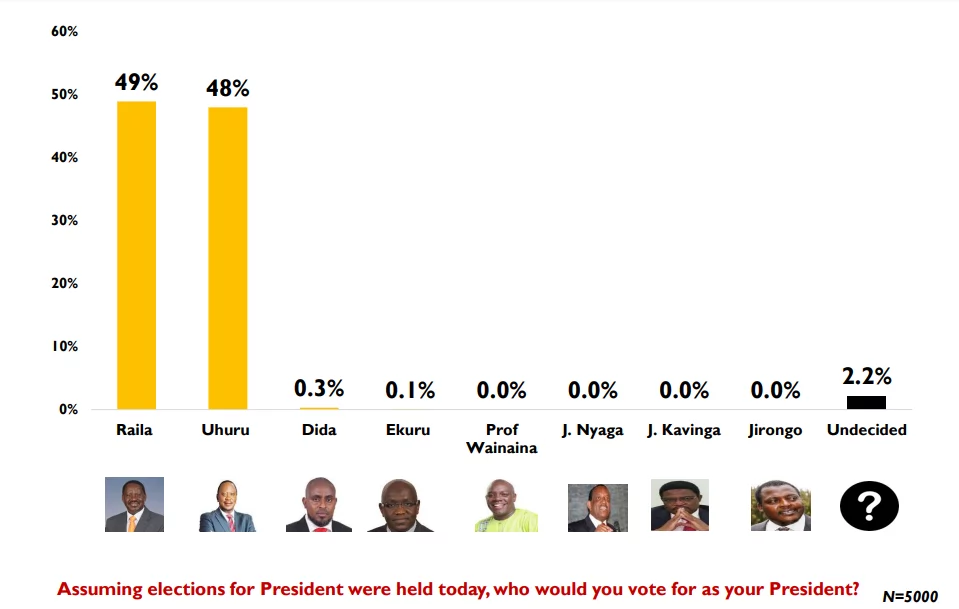 The undecided voters who are likely to be the tie breakers depending on how they would vote are 5%. According to the survey, another 3% of the voters refused to reveal whom they would vote for come August 8 while 1% said they would not vote.

The poll comes hot on heels of another one by Infotrak Research and Consulting also released on Tuesday which indicated Raila would beat Uhuru with a slight margin in the first round of the poll by 49% against 48%.

Tags: Uhuru would beat Raila in the election but undecided voters are the deal breakers
Previous Post