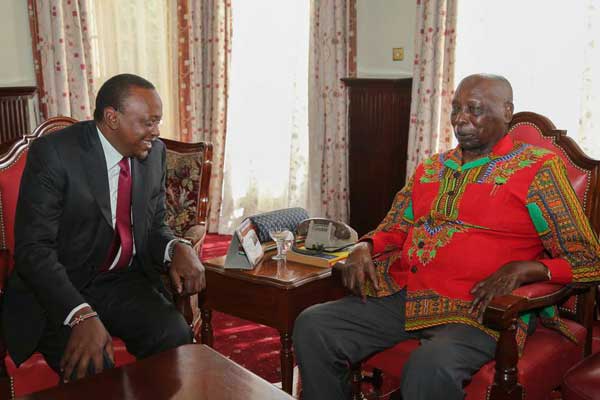 President Uhuru Kenyatta with former President Daniel arap Moi when he paid him a courtesy call at his Kabarnet Gardens residence in Nairobi on February 16, 2017. PHOTO | PSCU

In July 1987, a small news item with a picture of 26-year-old Uhuru doing a jig at a fund-raiser in Kiambu County appeared in the Standard newspaper.

Not many people paid attention to the article tucked in the inside pages. But one person did: President Daniel Moi.

After the news item was drawn to his attention, the President invited young Uhuru and his mother, Mama Ngina, for a cup of tea at Nairobi State House.

During the conversation with mother and son, Moi reportedly remarked: “I am happy the young man has started showing interest in public affairs. Who knows, one day he might be the occupant of this place. Moi will not be here forever?”

Another 26 years later, Uhuru was sworn in as fourth President of Kenya.

But it wasn’t a walk in the park. It was a journey that saw him humiliated with electoral defeat in his first quest to be MP in 1997, and rejected once more in his first bid at the presidency in 2002.

The journey would also see him lose battle for control of the political party associated with his father, KANU, and only make it to State House after he created his own outfit in the Jubilee Party.

The tumultuous path would also take him to the International Criminal Court in The Hague, and have his second electoral victory snatched away by the Kenyan Supreme Court.

Moi had said in his remarks: “Nafurahi kijana sasa atakua na boma yake ndio ajue kumenyana na wanaume wengine (I am happy the young man now has his own homestead and will learn to fight it out there with other men).”

Sure, it has been a political wrestling match all the way for the former winger of the Saint Mary’s School rugby team.

Soon after he was sworn in President in April 2013, Laikipia Senator, GG Kariuki, who had been elected to Parliament during all four Kenyan presidencies since Independence had told a Nation writer: “I have been in this Parliament when all four Kenyan Presidents were sworn in and can tell you Uhuru is the one who has worked hardest to be where he is!”

That was in 1990 when agitation for multi-partyism kicked off in earnest. Among those to join in the fray was young Uhuru when he teamed with his four friends to add their voice to the raging debate.

The four who the media dubbed “sons of prominent men” were Peter Mboya, Francis Michuki, Argwings Kodhek, and Alfred Getonga. The statement from the four in support of the multi-party debate came as a thunderbolt. For were sons of privilege not expected to be contented with the status quo?

Uhuru and friends didn’t stop there. President Moi appointed a KANU Elections Review Committee to collect views on how the ruling party would make electoral reforms. It was chaired by Vice President George Saitoti.

When Uhuru and company appeared before him, he couldn’t believe he heard the young men tell him that Kenyans wouldn’t just be contented with cosmetic changes in KANU but in a whole raft of democratic changes including multi-party system!

When multi-partyism was finally legislated in December 1991, Uhuru was widely expected to cast his lot with the opposition. Fresh information now available, indicate that all main formations in the opposition wanted to have young Kenyatta in their corner.

His maternal uncle, George Muhoho, and cousins – Ngengi Muigai and Beth Mugo – had thrown their weight with Mwai Kibaki’ Democratic Party (DP), and Uhuru was expected to join them in the party of relative moderation compared to Oginga Odinga’s Ford Kenya and Kenneth Matiba’s Ford Asili.

Even more interesting, it can now be disclosed, Odinga’s Ford Kenya was wooing Kenyatta. It had come through personal invitation from the senior Odinga when the two met at the burial of JM Desai, a Kenyan freedom fighter of Asian extraction, who was interred at the City Park in June 1992.

At the ceremony, Odinga was so impressed by the young Kenyatta who he’d last met as a boy in 1960s. He asked the young man to visit him at his AGIP Houses offices, which Uhuru did in company of Dr Njoroge Mungai.

During the visit, the elder Odinga genuinely wanted Kenyatta in his column, a request the young man promised to give some thought.

Meanwhile, President Moi, alarmed at the “strange” political friendships young Kenyatta was getting attracted to, got into works with his own designs.

One thing happened to work in his favour and the system. It was the time immediate Kenyatta family was venturing into big-league business in agro-processing, hospitality, and banking, among others.

Naturally, as it happens with businesspeople world over, it doesn’t pay to antagonise the government when on large-scale investments.

But even with that in mind, Uhuru’s dalliance with the ruling party up to the very last minute when President Moi unveiled him as his choice of successor, would be a very closely-guarded affair which left the entire KANU machinery from top to bottom, groping in the dark.

Few weeks to the 2002 presidential election, President Moi had to hold a secret meeting of defiant close aides and read them the riot act that it had to be Uhuru else……

At the secret parley convened at the Lake Baringo Country Club, powerful Cabinet minister Nicholas Biwott – just about the only person who could answer Moi in a charged moment – had to receive a scolding that left him tongue-tied.

“Biwott you should be the last person to talk back at me,” a furious Moi reportedly said to silence his life-time aide: “Were it not for me you would long have been put to jail!” The President didn’t elaborate on what he meant but the point was taken!

But even with all the backing and bull-dozing from President Moi, the electorate were not convinced and Uhuru overwhelmingly lost the presidency to Mwai Kibaki in the 2002 election. To his credit, he gracefully conceded defeat and lived to fight another day.

With Moi and KANU out of power, Uhuru was back to the drawing board. He had to start by getting control of KANU and rebuilding it. But he first had to contend with Biwott who wouldn’t let him have it on a silver platter, as if to revenge the humiliation at Lake Baringo Club and prove to the young man he was still the Total Man.

Uhuru finally managed to snatch KANU from Biwott but not before the latter took off with some pound of flesh to form the National Party of Kenya (NPK).

With some good reading of the political matrix, Uhuru kept out of the 2007 presidential race but wasn’t spared the corrosive fumes in that election that finally saw him hurled before judges at the ICC.

Wounded but not out, Uhuru would join the 2013 presidential race clearly the underdog. Information available indicate that his rival, Prime Minister Raila Odinga, was so convinced that State House was his to lose that weeks to the polling day, he made an extensive tour abroad sure that all had been sewed up.

His victory speech had already been written and waiting for rehearsal the night before he would be declared winner.

Unknown to him, Uhuru had rolled out a well-oiled campaign machinery that left nothing to chance.

Moreover, he and running-mate William Ruto were putting real quality time in the nuts-and-bolts to ensure victory as their rivals played to the gallery, inventing one political gymnastic after another.

Uhuru waited under Moi’s wings for years Reviewed by samrack on November 2, 2017 .

President Uhuru Kenyatta with former President Daniel arap Moi when he paid him a courtesy call at his Kabarnet Gardens residence in Nairobi on February 16, 2017. PHOTO | PSCU  Uhuru waited under Moi’s wings for years In July 1987, a small news item with a picture of 26-year-old Uhuru doing a jig at a