Uhuru phones Gideon to stay away from NASA 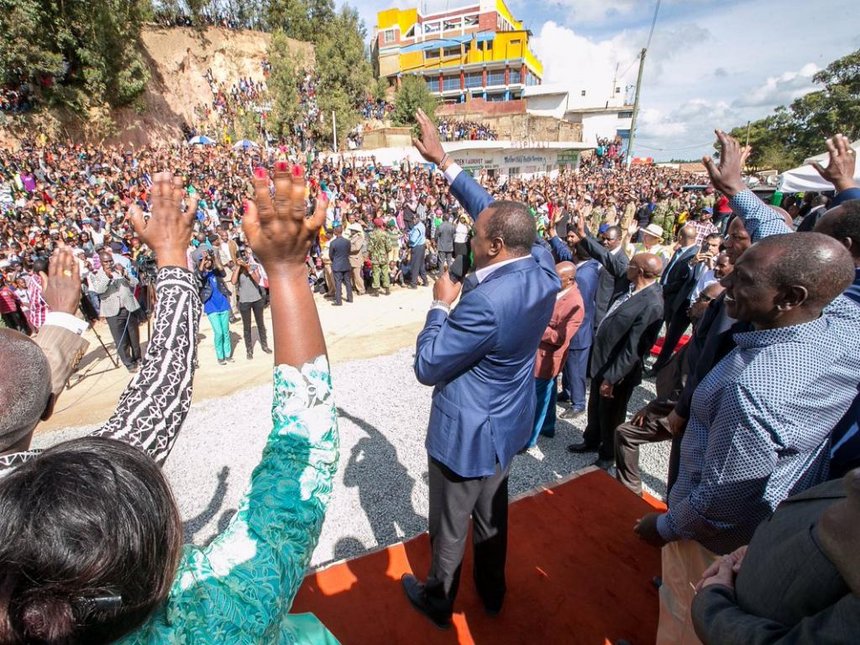 Uhuru phones Gideon to stay away from NASA

This is the latest and strongest signal Uhuru and the Jubilee Party are uneasy with the resurgent alliance coalescing around Amani leader Musalia Mudavadi and ODM leader Raila Odinga.

The President, according to a source in the Moi family, last week urged the Baringo senator to back his own reelection next year and lead the former ruling party to work with Jubilee.

Details of Moi’s response were not disclosed. However, Uhuru’s appeal is said to have informed Gideon’s decision to back away from his offer to enter into a deal with Mudavadi, who is spearheading formation of NASA, the National Super Alliance.

The source told the Star, however, Uhuru told Moi that “his interests and those of his family were well taken care off in Jubilee, and not in NASA.”

The team crafting the Super Alliance has proposed two Deputy Presidents in a new government — one of them Kanu chairman Moi.

Last Friday, however, Moi indicated that Kanu would stand by the agreement it signed with the Jubilee government and was not willing to join another alliance ahead of the 2017 elections.

Senator Moi said his party has an existing pact with Jubilee, which they signed after the 2013 general election, and it is not about to break it to enter into another accord..

“Kanu respects its obligations and until the expiry of the agreement, we are not in a hurry to get into another political agreement. As far as I am concerned, Kanu will honour the existing pact for now.” He was speaking in Mombasa during public hearings on the Local Content Bill.

“We have not entered a new coalition,” he said.

Gideon was not available for comment yesterday, as he did not answer phone calls or respond to text messages.

On Friday last week, his aide Joseph Kimkung said although the NASA proposal of First Deputy President has not been formally made, the Baringo senator was open to ideas.

“When it is presented to us formally, we will respond. Our party leader has made it clear he is willing to engage with progressive forces in a structured manner,” Kimkung told the Star.

The think tanks behind NASA are hoping to bring all opposition parties into a major alliance as they fight to remove the Jubilee government.

Kanu secretary general Nick Salat yesterday said NASA leaders are still tackling pertinent issues and negotiations will greatly depend on the IEBC deadlines as constituted in the supreme laws.

He said the IEBC timelines will also dictate if Kanu goes to the next elections in the Jubilee coalition or forms a new alliance, depending on the outcome of the talks and requirements of the amended Political Parties Act.

Salat said the move to stick to the IEBC deadlines was meant to ensure Kanu goes to the next elections well prepared under the new laws.

“When the Senator (Gideon Moi) said that he was not in any other coalition but in Kanu, he meant that we had not signed and agreed on terms with any alliance. I know we will agree at the end, but we have tight deadlines under the new laws,” Salat said.

Speaking to the Star on phone Salat confirmed that Kanu was in talks with opposition leader Raila Odinga, ANC leader Musalia Mudavadi and Wiper leader Kalonzo Musyoka to put in place an inclusive government to unite the country.

“We want to form an inclusive government but we must also ensure the MoU signed is strictly followed. We don’t want what happened to Narc to repeat again,” Salat aid.

Salat said Kanu will have its National Delegates Conference in two months to endorse the resolution of the talks or establish a new way forward for the party.

“We are in the final stages and addressing pertinent issues that we will reveal at the right time to kick off the campaigns together,” said Salat.

Salat was confident the task will succeed, standing his ground that Kanu will not be dissolved.

Raila, Kalonzo, Wetang’ula and Mudavadi have already been endorsed as flagbearers by their parties. They will compete to be the alliance’s presidential candidate.

Uhuru phones Gideon to stay away from NASA Reviewed by samrack on December 8, 2016 .

Share thisFacebookTwitterPinterestEmailWhatsAppPresident Uhuru Kenyatta with Deputy President William Ruto address residents of Nunguni on Wednesday, December 7. /PSCU Uhuru phones Gideon to stay away from NASA President Uhuru Kenyatta personally telephoned Kanu leader Gideon Moi and urged him not to join the National Super Alliance. This is the latest and strongest signal Uhuru and the