Uhuru orders provision of drugs to all kids with HIV

by samrack
in Health, HIV/AIDS, Kenya, News
A A
0

During the launch at Kenyatta International Convention Centre, President Kenyatta directed the ministries of Education and Health to initiate programmes that will ensure all HIV positive children are provided with life-saving medication.

The President said the issue of 42 per cent of HIV/AIDS infected children not on ARVs should be addressed without further delay.

President Kenyatta specifically urged the Ministry of Education to review the school curriculum and include lessons on how to deal with the HIV/AIDS scourge.

“We now have the statistics, we need to act on the statistics that we have. Indeed as to what the young people have said we need to change our attitude towards the HIV,” he said in relation to testimonies at the event.

Adding:  “I urge the Minister for Education to re-examine the curriculum and empower teachers to engage those of our young people living with the HIV.”

The President said HIV/AIDS remains a leading cause of adolescent death in Africa and the second highest globally.

He regretted the high HIV/AIDS infection rate among young people under the age of 24 years, a situation that threatened the future of societies and nations.

President Kenyatta said in Kenya, 30% of new HIV infections are in the adolescent group with 17% of AIDS-related deaths falling in the category.

He said the high rate of infection among adolescents was a great challenge to the economic prospects of the country and the continent at large.

“HIV/AIDS among adolescents is driven by vulnerability caused by lack of opportunities.  These opportunities relate to access to education and socio-economic empowerment,” said the President.

He said the Government is committed to increasing budgetary allocations to the education sector to ensure all children are retained in school till they attain the age of 18 years.

The Head of State said the determination to transform African development and attain shared prosperity focuses immensely on harnessing the youth.

“At a time when our nations are looking forward to unprecedented growth and change, we have the blessing of young and able people to drive development.  But HIV/AIDS burden on this group threatens to rob us of this promise,” he added. 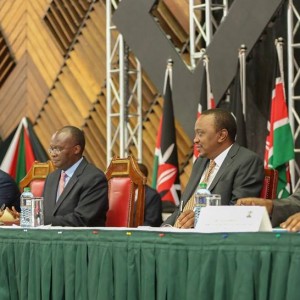 To tackle this challenge, President Kenyatta said his Government has embarked on a raft of commitments aimed at eliminating vulnerability and empowering the youth of Kenya.

“If we are to realize the promise of Kenya’s future, the youth must meaningfully participate in generating wealth.  For this to happen, vulnerabilities and barriers to their participation must give way,” the Head of State affirmed.

He lauded the First Lady’s ‘Beyond Zero’ campaign which has contributed significantly in the control of HIV infection and promoting maternal, newborn and child health.

“This campaign has already impacted countless lives throughout our country.  Its impact in reducing child HIV infection goes a long way in reducing future prevalence among adolescents,” President Kenyatta said.

Cabinet Secretaries Jacob Kaimenyi and James Macharia stressed the need to involve all Kenyans by sharing best practices in the management of HIV/AIDS pandemic.