Uhuru Kenyatta sworn in as president in for final term 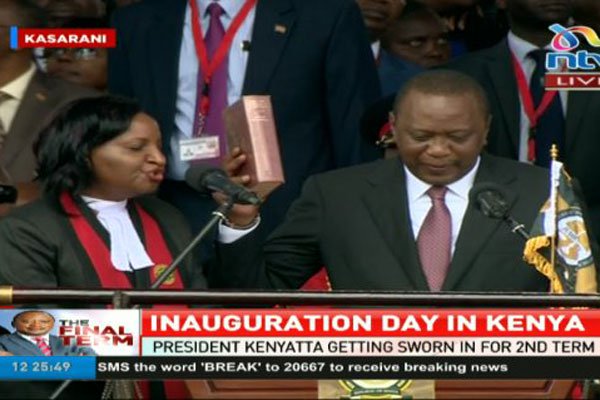 Uhuru Kenyatta sworn in as president in for final term

President Uhuru Kenyatta was sworn for his second and final five-year term on Tuesday to thunderous cheers from tens of thousands of supporters.

“I swear that I will be faithful and bear true allegiance to the Republic of Kenya; that I will obey, preserve, protect and defend this Constitution of Kenya, as by law established, and all other laws of the Republic; and that I will protect and uphold the sovereignty, integrity and dignity of the people of Kenya”, said Mr Kenyatta holding a Bible on his right hand as he took the oath of office.

He also pledged to “Do justice to all in accordance with this Constitution, as by law established, and the laws of Kenya, without fear, favour, affection or ill-will”.

Duncan Okello, who was master of ceremonies, said the Bible used is the same one used by the first President, Jomo Kenyatta, at his own swearing-in at Independence.

The oaths were administered by Anne Amadi, the Chief Registrar of the Judiciary.

The oath of office is 77 words long and the oath of due execution of office is 79 words long.
“The recurring theme is service to the people, defending the Constitution and integrity,” said Mr Okello.
The crowds chanted “Si uchawi, ni maombi” and responded “Yes, Sir,” after every phrase.

“I will diligently discharge my duties and perform my functions, to the best of my judgment; I will at all times, when so required, faithfully and truly give my counsel and advice to the President of the Republic of Kenya;

“I will do justice to all without fear, favour, affection or ill-will; and that I will not directly or indirectly reveal such matters as shall come to my knowledge in the discharge of my duties and committed to my secrecy,” Ruto pledged.

Regional leaders and foreign diplomats watched as the full to capacity stadium cheered and sang along to music.

Western nations including sent ambassadors to the ceremony.

Uhuru Kenyatta sworn in as president in for final term Reviewed by samrack on November 28, 2017 .