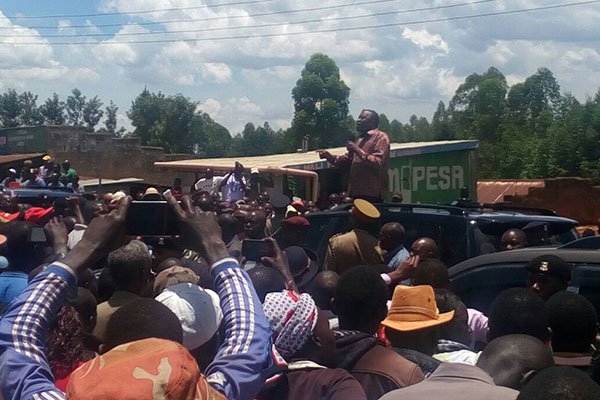 Speaking on his tour of the larger Gusii region on Wednesday, Mr Kenyatta said Mr Odinga, who rejected the 2007 General Election results, had a hand in the chaos that claimed over 1,133 lives.

“Raila was at the centre of the 2007 chaos in which Kenyans fought but he blamed it on Ruto,” he told a gathering of leaders at Nyanturago Stadium in Kisii County.

“Yeye ndio aliwasha moto (He is the one who ignited the flames,” he said.

The political  turmoil uprooted over 650,000 people from their homes and cost businesses billions of shillings.

Mr Odinga has denied playing any role in the violence and the trial of Mr Ruto and Mr Kenyatta at the International Criminal Court.

In one of the interviews with the Nation, Mr Odinga said he did not ask Kenyans to attack and kill one another during the mass action to protest alleged rigging of ODM victory by Mr Kibaki’s Party of National Unity.

He also blamed the indictment and trial of Ruto, who was in ODM at that time, on Parliament’s and the then suspects’ refusal to help set up a local tribunal to look into the chaos.

Mr Odinga and Mr Kibaki, who was declared the winner of poll, were not indicted by ICC.

Six leaders, including Mr Kenyatta and Mr Ruto, were indicted by The Hague-based court.

Mr Kenyatta and Mr Ruto faced charges of, among others, crimes against humanity, persecution and forcible transfer of population.

Mr Kosgey, Mr Muthaura and Mr Ali were acquitted due to lack of evidence linking them to crimes committed during the violence.

The cases against Mr Kenyatta, Mr Ruto and Mr Sang also crumbled due to what Prosecutor Fatou Bensouda said was witness interference and lack cooperation from the Kenyan government.