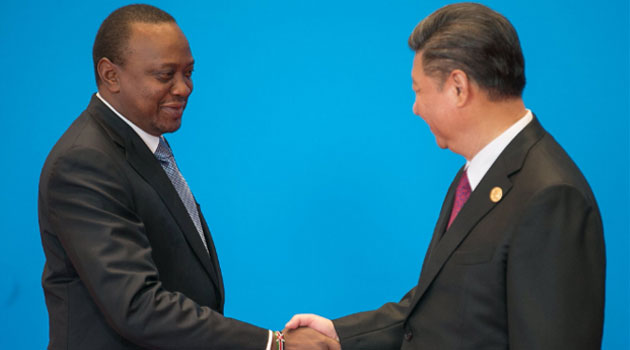 President Kenyatta is one of only two African leaders invite to take a seat at the table of 30 which includes Russia’s President Vladimir Putin and Turkey’s Recep Tayyip Erdogan; the other African leader being Ethiopia’s Prime Minister Hailemariam Desalegn/PSCU

The Round Table came into existence in the time of the legendary King Arthur; the idea behind it being that when he and his knights sat around it, they would sit as equals; there being no ‘head’ of the table.

It’s one such round-table meeting that President Uhuru Kenyatta took part in on Monday morning before he was scheduled to hold bilateral talks with his host President Xi Jinping of China and the nation’s Premier, Li Keqiang.

President Kenyatta is one of only two African leaders invite to take a seat at the table of 30 which includes Russia’s President Vladimir Putin and Turkey’s Recep Tayyip Erdogan; the other African leader being Ethiopia’s Prime Minister Hailemariam Desalegn.

The leaders are gathered in Beijing, China for the Belt and Roads Forum for International Cooperation, four years since its inception.

The brainchild of President Xi, the initiative is aimed at reviving the historical silk road and maritime routes through Africa, Asia and Europe through a collaborative effort based on, “mutual respect and driven by a common endeavour to pursue prosperity,” President Xi encapsulated at the opening of the forum on Sunday.

In the acknowledgement that, “financial bottleneck is a key challenge to realising connectivity,” President Xi announced an increase in its contribution to the building of the necessary infrastructure with Kenya looking to secure funding for the dualling of the Northern and Eastern bypasses.

President Xi got the round-table ball rolling by stating that “roads don’t build themselves and prosperity doesn’t happen on its own.”

President Xi has therefore called on world leaders to unite in the effort to confront the challenges of our time which include climate change.

Kenya’s Standard Gauge Railway has been hailed as a shining example of what is being realised through the Belt and Road initiative and President Xi has been invited to grace its launch in two weeks’ time.

The forum has been viewed by some as the ushering in a new world order given the ‘America First’ policy adopted by US President Donald Trump which sends the message that the superpower will be taking a back seat where world affairs are concerned.

The message sent out by the world leaders who attended the Belt and Road Forum in Beijing to the contrary was one that espoused open trade as opposed to protectionism.

“Total trade between China and other Belt and Road countries in 2014-2016 has exceeded US$3 trillion, and China’s investment in these countries has surpassed US$50 billion. Chinese companies have set up 56 economic cooperation zones in over 20 countries, generating some US$1.1 billion of tax revenue and 180,000 jobs for them,” President Xi testified at the forum on Sunday.

India was however notably unrepresented at the forum with its Foreign Ministry Spokesman Gopal Baglay being quoted as saying: “Connectivity initiatives must follow principles of financial responsibility to avoid projects that would create unsustainable debt burden for communities.”

Uhuru gets seat at the table in what pundits says is rise of new world order Reviewed by samrack on May 15, 2017 .