A section of the media fraternity on Friday, October 16, expected President Uhuru Kenyatta to hold discussions centred around the Building Bridges Initiative ahead of the unveiling of the taskforce’s report.

However, the president shunned the topic and centered the discussions on Kenyan youth who were showing their patriotism by working with the multi-agency Government team on various national security projects.

Speaking from Manyani, Taita Taveta County, the president stated that most of those who honoured the invitation to attend the ceremony expected that the discussions would revolve around politics.

“I know most most of you love politics and that is why you accepted our invitation today. I’m sure if I would have invited you to talk about development matters, most of you would not have turned up,” he stated.

The president urged Kenyans to shun politics and focus on matters that would enhance development in the country. 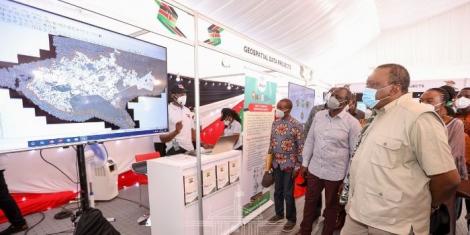 “Let us love our country, let us be patriotic. Promote these young people and shun going to press conferences of people who do not understand what they are talking about,” the Head of State stated.

In addition, the president also condemned members of the fourth estate for misinterpretation of facts, saying that they did not seek information from the right individuals.

“After watching and listening to talk about ‘Germans’ coming to do Huduma Namba… which contracts being signed for how many billion. I decided to bring you to meet the ‘Germans’… Meet them in person…” the president stated.

The president asked those who were still in doubt on the progress of Huduma Namba, to engage innovators who were present during the meeting.

“You can meet them in person and ask them all the questions that you have,” he stated.

He added that young innovators had helped in developing the platform that saw the collection and submission of census outcomes in record time.

“They have helped us to develop a platform that allowed us to do our census and deliver the results of our census in record time until we have countries from all over Africa, including Europe wanting to know how we managed to develop the system,” he stated.

Inside plot to kick out CJ Maraga