Former Sports minister Hassan Wario at a Milimani Court on March 13, 2019, for the hearing of a case on the embezzlement of funds for the 2016 Rio Olympic Games. PHOTO | DENNIS ONSONGO | NATION MEDIA GROUP

Dr Wario, once a Sports Cabinet secretary, is fighting to clear his name in Kenyan courts as he was charged with offences related to misappropriation of funds for the 2016 Rio Olympic Games.

In changes affecting several women and elevating career diplomats, the President nominated Michael Mubea, Deputy Chief Executive Officer of the Ethics and Anti-Corruption, as ambassador to Dublin in Ireland.

Mr Mubea will replace Richard Opembe who will move to the Kenyan mission in Madrid, Spain, which had been headed by Severine Luyali.

But they could also represent the desire to change Kenya’s image as most of the replacements have occurred in embassies where Kenyans in the diaspora had consistently complained of poor service.

Mr Githae, a former Finance Minister in the Kibaki government, was appointed ambassador to the US more than five years ago.

He heads to Vienna and his post will be held by Larazus Ombai Amayo, who was in 2018 transferred from London to the UN Mission in New York.

The President replaced Dr Joseph Sang in Stockholm, Sweden, with Diana Kiambuthi and appointed Ms Jackline Yonga as head of the mission in Rome, Italy.

Harriet Nduma had been serving there in acting capacity. 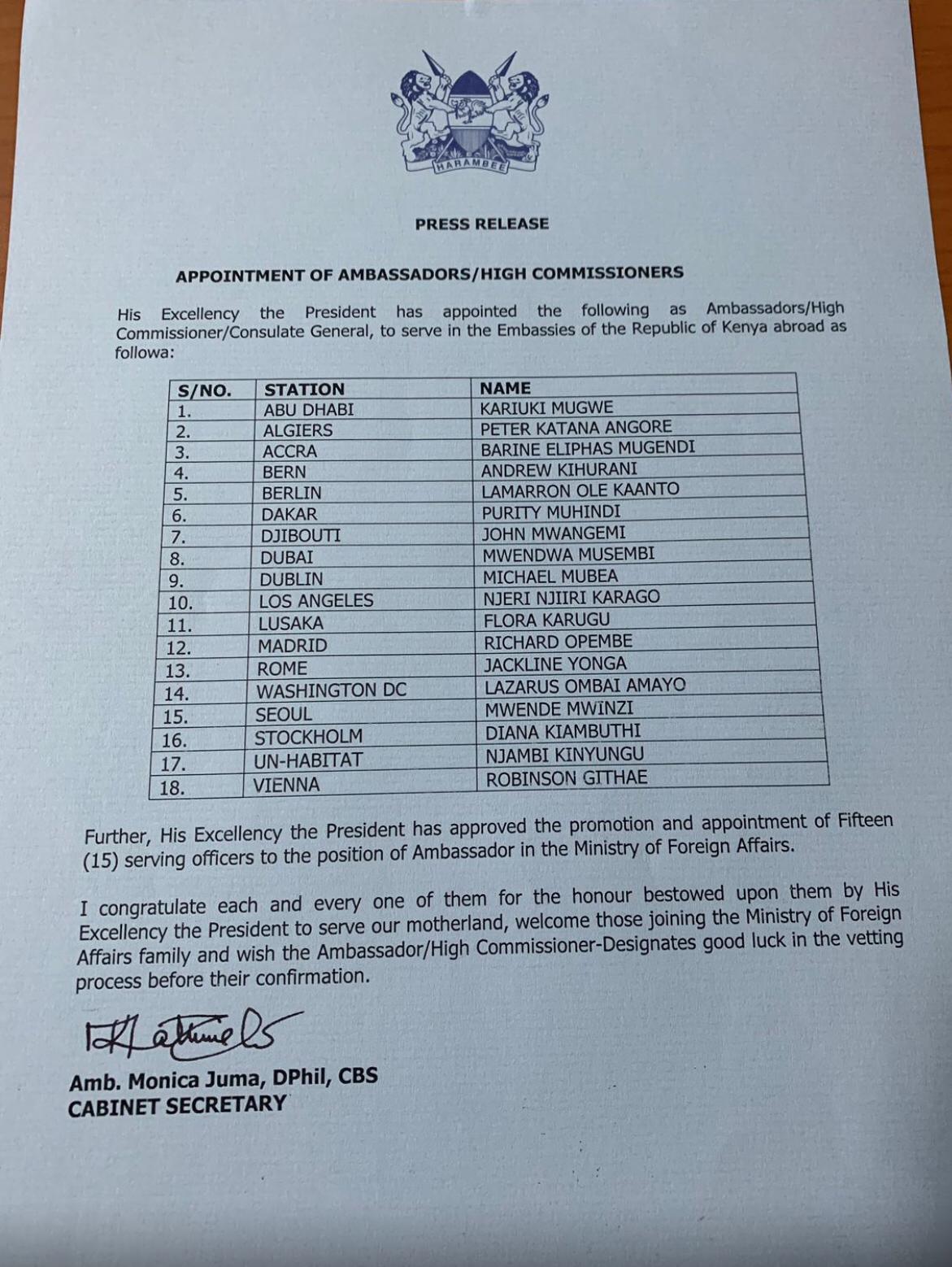 The President signalled opening of a diplomatic mission in the Swiss political capital of Bern by nominated Andrew Kihurani.

The decision to open the mission in Bern follows a promise he made when Swiss President Alain Berset visited last July.

Kenya’s former ambassador to Sweden, Purity Muhindi, who had been serving as Director for Africa will head to Dakar in Senegal, one of the new diplomatic missions opened this year.

Dr Juma, who announced the changes in a statement on Friday, congratulated the appointees.

Unlike those transferred, new entrants in diplomatic service as ambassadors will have to be vetted by the National Assembly before they can report.

Also, as is tradition, new entrants will have to be trained on diplomatic courtesies, a process that often takes at least 60 days.

Njambi Kinyungu will head the Kenyan mission to the UN-Habitat in Nairobi, a position last held by Prof Sam Ongeri, who is now Kisii senator.

The others appointed are:

Ms Juma also announced that the President had approved the promotion and appointment of 15 serving officers to the position of ambassador in the ministry.

The other, who are based at the headquarters, are Michael Kiboino, Salim Salim, John Tipis, Arthur Andambi Amaya, Catherine Bonareri Mogaka and Mohamed Guyo.