Two days of make or break for President Kenyatta 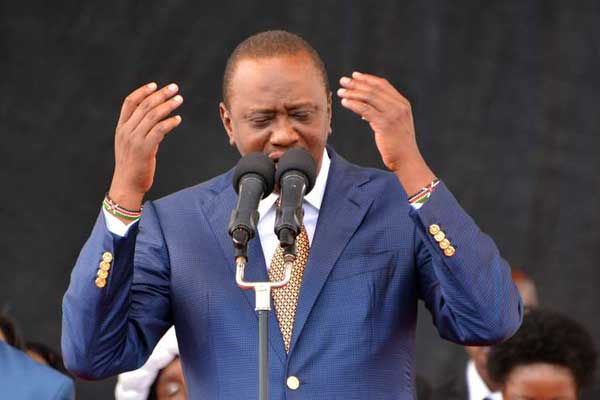 Two days of make or break for President Kenyatta

Kenya appears set for a prolonged period of political, constitutional and economic uncertainty prompted by the presidential election standoff.

President Uhuru Kenyatta, who won a repeat election boycotted by his main challenger Raila Odinga, faces a tense two days before he knows whether he will begin a second term or wait for another Supreme Court determination on whether or not he won fairly.

Monday is the constitutional deadline within which a petitioner can challenge a presidential win. Mr Kenyatta was declared winner of the repeat poll on September 30.

The election was held after the Supreme Court on September 1 annulled President Kenyatta’s August 8 poll win, saying the election was plagued by illegalities and irregularities.

In the rerun held on October 26 and boycotted by Nasa, Mr Kenyatta was declared winner with a with 7.4 million votes, representing 98 per cent of the turnout.

When he received his certificate from Independent and Electoral Boundaries Commission chairman Wafula Chebukati, a cautious President Kenyatta did not spell out his agenda or engage his rivals, saying he would only do so once legal issues around his re-election were cleared.

The scale of the challenge that lies ahead was revealed Friday when Mr Odinga’s Nasa started what it called a campaign of economic liberation by asking its supporters to boycott products and services of firms it claimed helped to subvert the election.

It named Safaricom, the telecommunications giant and the most profitable company in the region, Brookside a dairy products firm and Bidco, the cooking oil maker.

The economic boycott and picketing seem to be Nasa’s long term strategy to force Jubilee to agree to fresh elections and constitutional changes. In the short term, Mr Kenyatta may also have to defend his win in court.

Already, two senior constitutional lawyers have warned that there are enough grounds to nullify the election, again.

Mr Nzamba Kitonga, who led the team of experts that drafted the 2010 constitution, on Friday said while he was not aware of any plans to file a presidential petition at the Supreme Court, the question of what a fresh presidential election means would be the battleground.

“It (Uhuru’s win) could be annulled on the grounds that nominations were not conducted by political parties,” he said, adding that the general interpretation of the Supreme Court order on fresh election was for the electoral commission to open up the process even to those who had no participated on August 8.

Moi University law scholar Mutakha Kang’u said there were “a lot of illegalities and irregularities” noted in forms 34A and 34B in the repeat election, “even more than what the Supreme Court pointed out in September”.

He pointed out that another ground could be on whether there was fair play in the inclusion of other candidates and if they were given enough time to campaign.

“The other has to do with the issues raised by Mr Chebukati in his two leaked memos to chief executive Ezra Chiloba and the statement he made following the resignation of commissioner Roslyn Akombe that he could not assure the country of a credible election.”

Prof Kang’u said: “If one attaches these issues and swears an affidavit, then any judge cannot dismiss such a case.”

And though Nasa has said it would not file a petition this time, some Jubilee leaders believe it may be enjoined to one to “be filed by friendly lobbies” and are working overdrive to defeat it.

“Nasa is working with two NGOs and they are getting a citizen to go to court represented by both organisations. They have asked them to sue IEBC, Jubilee and include Nasa as the respondents so that it looks like they are not part of it,” Senate Majority Leader Kipchumba Murkomen said on Friday.

His counterpart in the National Assembly Aden Duale said he was also aware of plans by the Kenya Human Rights Commission (KHRC) to file a petition.

KHRC is part of the Kura Yangu, Sauti Yangu grouping of NGOs, which on Wednesday night released a report pointing out inconsistencies in vote tallying, the number of registered voters and the number of people who voted as per the IEBC data.

KHRC executive director George Kegoro has said he is not preparing to file a petition, but Jubilee and IEBC are not sitting pretty, opting to work from a worst-case scenario so that they are not caught off guard.

For Nasa, it appears, even if there is no petition or the court upholds Mr Kenyatta’s victory in the case of a petition, the struggle for change will be stepped up.

Nasa is pushing for changes on a number of areas that include the structure of the executive and devolution.

That Jubilee is also willing to engage on constitutional changes is one of the positives in the otherwise gloomy outlook for the country.

Western diplomats and local church groups have continued their efforts to bring Mr Kenyatta and Mr Odinga on the table to avoid a protracted civil strife that may have devastating economic and human rights consequences.
PETITION

On Friday, the Supreme Court, IEBC and Jubilee indicated they were ready for a petition.

“The Supreme Court is ready to hear any poll petition that might be filed, challenging the October 26 presidential election,” Supreme Court Registrar Esther Nyaiyaki said.

She said the court was considering leaving the registry open for any party, who might file the case on Saturday or Sunday but declined to answer a question on whether or not there were possibilities of the bench being hit by a quorum hitch as it happened on October 25 when a case seeking the postponement of the repeat election was shelved because only two judges were available for the hearing.

After the August 8 poll, the registry remained open over the weekend and closed late at night to allow parties to file. The Raila Odinga petition was filed on the last day, a few minutes to midnight.

“The judges and judicial officers involved in the process are more prepared to deal with the petition and unlike the last presidential petition, most of the things are still fresh,” Mr Mundia Muchiri, a spokesman for the Office of the Chief Justice said.

The situation was similar at the IEBC, with Mr Kamau Karori, one of its lawyers, saying: “We are putting our documents together so that in the event a petition is filed, we are ready.”

Others insiders within the commission were of the feeling that the last case was lost because IEBC was unable to explain itself.

Its lawyers fumbled when asked about stray ballots, security features on result forms and access to servers.

The case aside, the assertions by the Senate and National Assembly leadership appear to be part of Jubilee’s latest approach the party has taken in dealing with by the opposition — pre-empting their moves. They did it before the informal withdrawal of Mr Odinga from the repeat election.

Mr Odinga’s withdrawal did not stop the election as the High Court later allowed the inclusion of all candidates from the August 8 election and made it possible for the poll to go ahead, albeit with a low turnout and complete failure in four counties.

Away from the boycotts, Nasa is also pressing on with plans on the creation of a people’s assembly to come up with changes to the Constitution.

Mr Odinga on Thursday met governors allied to the coalition and asked them to take the proposal to their county assemblies for approval.

During the meeting, also attended by ANC leader Musalia Mudavadi, governors allied to Nasa are said to have approved the coalition’s plans to set up a People’s Assembly and begin a review of the Constitution, particularly to safeguard and strengthen devolution, according to the statement from the coalition.

“It is to constitute a convention to be held in Nairobi to discuss and determine the pathway to democracy and constitutionalism and to restore legality and the rule of law,” Nasa chief executive Norman Magaya said of the assembly.

But Mr Murkomen accused the opposition of creating the impression that Kenya had not concluded the election.

“The reality is that Tinga (Mr Odinga) was misled by his advisers that when he withdraws there will be no election. Now he finds himself in a very difficult situation because elections took place,” he said.

He added that for Nasa to get a consensus, draft a bill and take it through the political and legal processes required for it to arrive at the point of changing the Constitution, the earliest the supreme law could be changed would be 2019.

But away from the battle of wits pitting the two political formations, the Nation has established that Jubilee-leaning leaders, the church and the West are pushing for talks between President Kenyatta and his arch-rival Odinga.

With a general consensus, including from President Kenyatta and his deputy William Ruto that the team was willing to have talks, various groups were this week pushing concerted efforts to get the two on the table.

Under the National Council of Churches of Kenya (NCCK), the clergy have called for a change in law to create the positions of the office of the official leader of opposition and that of a prime minister and two deputies.

Last week, President Kenyatta and DP Ruto, in separate interviews, said they were willing to talk with Mr Odinga.

Mr Ruto said that while Jubilee Party was willing to dialogue, “it can never be about another election outside the Constitution.”

National Assembly Speaker Justin Muturi has also weighed in warning against having such talks “outside the Constitution.”

This week, the Ameru Professionals lobby led by Lands Cabinet Secretary Jacob Kaimenyi called for national dialogue, which they said should involve all critical players in the political, business and religious circles, including elders and the civil society.

“That can only happen when the president takes oath of office and therefore he will have full mandate of the country’s leadership. The dialogue should be candid and constructive, focusing on the common good of all Kenyans,” Prof Kaimenyi said.

Though they said that such discussion should not necessarily be about sharing the national government, they called for such talks to be geared towards “the good of the country.”

Two days of make or break for President Kenyatta Reviewed by samrack on November 4, 2017 .