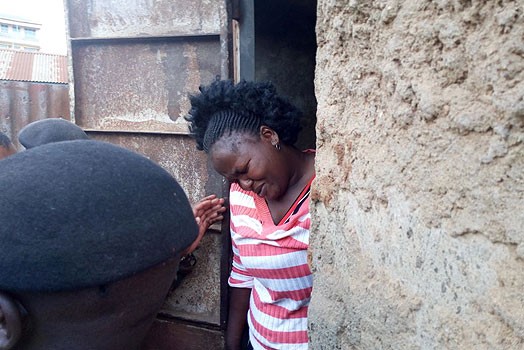 The suspected baby thief cries as she is led out of the Kawangware AP camp on February 20, 2018 moments after being arrested. PHOTO | AGGREY OMBOKI.

The twin boy who was stolen at Kenyatta National Hospital in Nairobi on Sunday has been found in Kawangware after tip-off from the public.

The baby’s father Job Nyatiti Ouko on Tuesday confirmed that the infant was found in the house of the woman suspected to have stolen him as the man attended to his wife.

“Someone called me and said that a woman matching the CCTV photo had been seen with a newborn in Kawangware and was not breastfeeding the baby,” he told the Nation in a phone interview.

He said he was yet to know the name of the woman but recognised her on seeing her before she fled.

“We found the baby just as she was about to leave the estate but now police are after her,” Mr Ouko said.

Police are holding a woman linked to the theft at Kawangware Administration Police Camp.

Officers said the suspect was taken to the camp by the public who spotted her with the baby in a residential block in the area sprawling suburb.

The mother of the twins, Jane Kerubo, who delivered at the county’s top referral hospital two weeks ago, had been taken to the facility on Sunday 2am with breathing difficulties.

CCTV cameras at the hospital captured a woman holding a baby, believed to be the stolen newborn, moments before she boarded a motorbike and sped off.

It is believed that Mr Ouko and his wife warmed up to the two strangers as they spoke in their local dialect.

“Ms Naomi Leo (Jane’s sister) requested the ladies to hold the babies for her while she assists her brother-in-law to wheel her sister to the ward,” the hospital’s communications manager Simon Ithai explained in a statement.

“Shortly after they entered the ward, one of the ladies who had one of the babies by the name Lucy Kwamboka, came to the ward claiming that the other lady had disappeared with the other baby and they needed to raise the alarm,” Mr Ithai added.

The newborn was returned to KNH for medical examination.

Share thisFacebookTwitterPinterestEmailWhatsAppThe suspected baby thief cries as she is led out of the Kawangware AP camp on February 20, 2018 moments after being arrested. PHOTO | AGGREY OMBOKI. Twin boy stolen from KNH found in Kawangware, Nairobi The twin boy who was stolen at Kenyatta National Hospital in Nairobi on Sunday has been found in