US Passport with Flag/Photo Courtesy 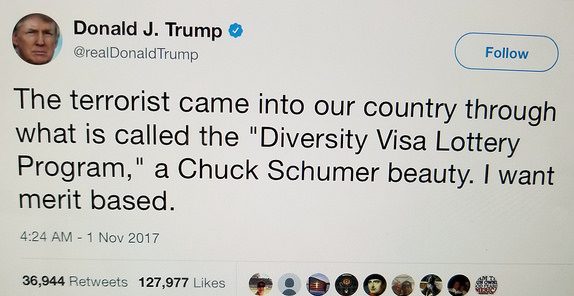 “The terrorist came into our country through what is called the “Diversity Visa Lottery Program,” a Chuck Schumer beauty. I want merit based.”4:24 AM – 1 Nov 2017 Twitter

Trump’s immediate labeling of the attack as a terrorist act and his calls for policy actions contrasted with his responses to the violence and a killing by white supremacists in Charlottesville, Va., in August — Trump wouldn’t blame the neo-Nazis solely and said then he doesn’t rush to discuss incidents without the facts — and to the mass killings in Las Vegas on Oct. 1, after which he said it was too soon to discuss gun laws.READ MORE