Timothy Cheruiyot of Kenya won the men’s 1,500 metres world title in Doha on Sunday in an astonishing run, leading from pillar to post in a time of 3min 29.26sec. The 23-year-old’s victory put to an end a painful run of silver medal performances including the 2017 world final in London behind compatriot Elijah Manangoi. Manangoi was unable to defend his title as he has an ankle injury. “It has been a long journey,” said Cheruiyot. “I kept saying to be a champion is a long wait and to be one you have to train with champions so I trained with Manangoi.” Algeria’s 2012 Olympic champion Taoufik Makhloufi took silver in 3:31.38 while Poland’s Marcin Lewandowski took the bronze in a time of 3:31.46. Cheruiyot set off at a fast pace and by the time they had reached the marker for three laps to go the field was already spread out. His compatriot Ronald Kwemoi was the only runner able to keep with him but he eventually found the pace too much and was swallowed up with over a lap to go. Makhloufi, who came out of retirement this year because he said he missed the “story and the glory”, gave chase along with European champion Jakob Ingebrigtsen. Cheruiyot did not falter and, rounding the bend, looked to have a chance of breaking Hicham El Guerrouj’s world record.

However, the effort began to take its toll but he still had plenty in hand to cross the line well clear. “I am not saying I will break the world record but if I keep training hard and maintain my progress who knows?” said Cheruiyot. Makhloufi added another silver to his growing tally — he finished second in both the 800m and 1,500m finals at the 2016 Olympics. “My objective was to win a medal and I achieved that with honours,” said the 31-year-old Makhloufi. “2020 continues to be my main objective and preparing seriously. “This is just the beginning of a long road to the Olympics.” Lewandowski, who is fortunate to be an athlete at all after being hit by a bus when he was seven years old, timed his late run to perfection and passed the tiring Ingebrigtsen for a deserved bronze. The 32-year-old — the 800m European champion in 2010 — punched the air in delight after crossing the line as he finally claimed a world outdoor medal. He had finished fourth twice in his old event, the 800m, in 2011 and 2013. “In four (world) finals I never got a medal so this time I waited till the last moment,” he said. “I was patient, to be honest I did not look for Timothy (Cheruiyot) although I could tell it was a very fast pace. “It is a great achievement for me. – nation.co.ke

KENYA GETS 2ND POSITION IN 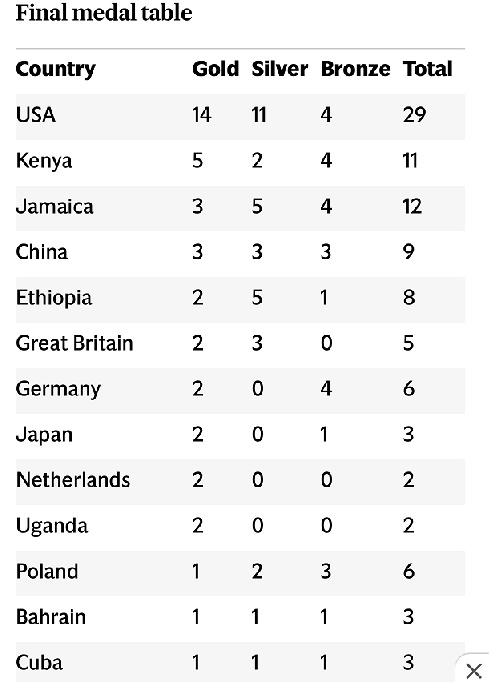 Kenya Railways Suspends Ban on Foodstuff and Beverages into Termini

Those without Health Insurance, Ability to Pay Medical Bills to be Denied US Visas

Those without Health Insurance, Ability to Pay Medical Bills to be Denied US Visas