The tips that aided success of Obama’s visit to Kenya 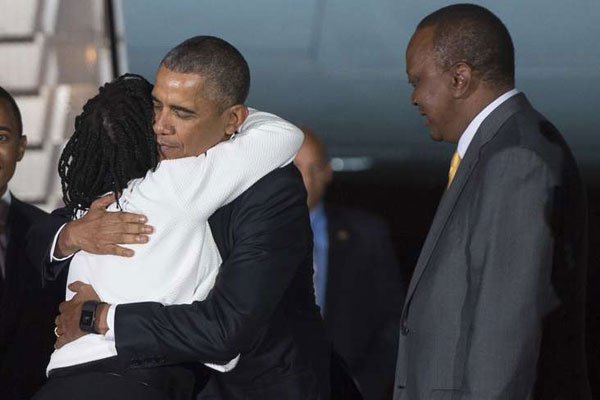 The tips that aided success of Obama’s visit to Kenya

I first came across the name of the man who would go on to make history as the first black President of the United States early in 1990 while a reporter at The Weekly Review, Kenya’s pioneering news magazine.

We were at the time pre-occupied with major political developments on the home front when out of the blue, fabled published and Editor-in-Chief Hilary Ng’weno asked for a piece on a ‘Kenyan-American’ student Barry Obama, who had just been elected first black president of the Harvard Law Review in its 104-year history.

He even helpfully provided a mugshot.

All of us in the newsroom were puzzled, for it was unlike HBN, as we referred to him, to intervene with the newsroom in such a manner.

We came to realise that the Harvard student’s father, Barack Obama Senior, must have been our editor’s contemporary amongst beneficiaries of the famous ‘airlifts’ that took Kenyan students to American universities before independence.

Few of us in the newsroom saw the significance of the Harvard Law Review posting, and we all knew that the HBN was not prone to using the editorial pages for extending favours to friends.

But he insisted on this one, justified with the predication that the young Harvard law student would go far.

Fast Forward to 2005, and the young man indeed made history with his election to the United States Senate, after a stint as a Illinois State Senator.

Not long after Obama took his seat, I was in the Daily Nation newsroom when I got a call from a visiting aide of the newly-minted Senator.

He was in Nairobi laying the groundwork for a visit to Kenya, and wanted my take on a number of issues.

We met over tea and biscuits on the Serena Hotel lawns and went over a wide variety of issues.

The Obama team was particularly interested in understanding the power-dynamics of Kenyan politics, and the protocol to be observed in engagements with the leadership.

Mr Obama’s aides seemed pretty well informed on Kenyan politics, and needed guidance on the possible ramifications of any statements he made touching on corruption, good governance, human rights, democratisation and other burning issues of the day.

My advice was that while he could raise his concerns and ideas on such legitimate issues, he had to be careful not to appear to take sides.

There would be a great excitement over the Senator’s visit, I cautioned, and Senator Obama would have to be careful that the visit was not hijacked by any political or ethnic grouping.

He would particularly have to be even-handed in his interactions with President Kibaki and Mr Odinga.

A few months later, Mr Obama made his much anticipated visit to Kenya as a United States Senator.

I reached out to the team, and the aide who’d sought me out returned the favour by getting me the only exclusive interview with the Kenyan media.

With NTV colleague Julie Gichuru, we met Senator Obama in a room at the Serena.

He came in alone casually dressed and without the retinue of aides.

The one-one-one revealed an interviewee who paused to think before responding, with a thoughtful, halting cadence that came across as more of a college professor than a smooth-talking politician.

US President Barack Obama waving as he enters his plane “Air Force One” prior to his departure from the Tegel airport in Berlin on November 18, 2016, where the US President met the German Chancellor and other European leaders. PHOTO | AFP

COVERING THE CAMPAIGN
By that time he’d already caused something of a storm with a tough speech on corruption and tribalism that many in the Kibaki administration did not take kindly too.

Some in government interpreted it as a viewpoint shaped by his supposed kinship with Mr Odinga, who had memorably referred to him as a cousin though no evidence was ever provided of such relationship.

The Government spokesman of the time Alfred Mutua, now Machakos Governor, dismissed his as a ‘Junior Senator’.

Senator Obama himself was aware of the ire his speech had caused, and seemed keen to placate President Kibaki.

He recalled that when his father, A Treasury economist, was blacklisted by the Jomo Kenyatta administration, it was Kibaki, then Finance minister, who brought him back into the fold after seven years in the wilderness.

He offered that President Kibaki was a decent man who wanted to do the right things, “but sometimes in an environment where there’s a lot of pressure — from constituents, from ethnic bases — maybe you forget what exactly you were trying to do in the first place, which is something all of us in politics have to contend with”.

At that time the freshman Senator was already generating excitement across the United States, and was already being mentioned as a likely presidential candidate some time in the future.

Off camera, I asked him if he’d thrown his hat into the ring at the 2008 presidential election.

His answer was that it was too early, and he was still learning his way around the Senate.

It was not long before the junior senator from Illinois indeed entered the fray, and won a stunning upset over Hillary Clinton for the Democratic Party nominations.

Largely living out of suitcases and fast food, we followed the campaigns across the battleground states of Pennsylvania, Ohio, New Jersey and Florida.

OBAMA’S AGENDA
During the debates, I watched Obama with the same careful tone I’d observed at the 2006 interview.

The halting speech and long pauses had one commentator suggest that he could not speak without a teleprompter.

On the campaign platform, however it was a different Obama.

The powerful oratory and inspirational speeches roused crowds wherever he went.

It was essentially the same stump speech wherever he spoke — the economy, the mortgage and banking crisis, job creation, opportunities for youth, women and racial minority groups, unity and strength in diversity, the Iraq and Afghanistan wars et cetera — but carefully tailored for local audiences.

In middle and upper class white areas emphasis would be on how the policies of the outgoing Bush administration had led to economic collapse that hit all hard working Americans.

In deprived black areas, the theme would be the same, but with added emphasis on self-reliance, the value of education, and the critical role of responsible parenting.

What I noted was that there was almost zero reference to Africa policy.

It was as if the Obama campaign had decided to downplay Africa so as not to raise concerns on his roots.

During the tour I had tried to make use of my contacts to get a place on his presidential campaign jet.

I filled in the necessary accreditation forms and was advised by our local ‘fixer’ that prospects on balloting for the coveted seat looked good.

It would have depleted our budget (you pay the seat at rather astronomical rates) but would have been money well spent.

Finally, word came though that we were not successful, because priority was being given to local media, local as in the State or town being visited because ‘all politics is local’.

But I also gathered from the grapevine that we were ruled out specifically because we were from Kenya, and his campaign team did not want new distractions from Fox News and other right-wing media outlets.

Our last port of call was at Grant Park in Obama’s home town, Chicago, on election night where an excited crowd of supporters gathered to await the election results being beamed on giant screens.

There was no waiting for election officials to tortuously read through results as they came in from the field.

In the US, early election results are gathered from the polling stations, districts and states, tallied and announced by the media.

As the CNN screens at Grant Park chalked the vote from the battleground States, wild cheers would go up till the tumultuous roar when Pennsylvania, Ohio and Florida were called, and Obama built up an unassailable lead.

By the time Mr Obama and running mate Joe Biden, and their families finally strode onto the giant stage to join the victory celebration soon after Republican rival John McCain had called him to concede, there had been no long-winded official announcement from any electoral officials.

That’s the way it works it there, which should provide lessons on how we manage our often chaotic results transmission and announcement system.

The point is that votes are counted at the polling station, and tallied at the local State or County level.

The media and other interested parties are then free to do their own tabulations and reporting, with no need for intervention, or mischief, at results transmission or any national tallying centre.

Official compilation of the results actually comes much later.

President Obama skipped Kenya during his first time, but finally made his ‘homecoming’ tour in 2015.

WHEEL TURNED
It was a visit awaited with trepidation, for during Kenya’s own 2013 election campaigns, his administration had provoked the ire of the Uhuru Kenyatta-William Ruto Jubilee team by appearing to back the Cord duo of Raila Odinga and Kalonzo Musyoka.

The Obama administration had made it very clear that it viewed dimly the candidacy of a ticket facing charges at the International Criminal Court over the 2007-2008 post-election violence.

This culminated in the ‘Choices have consequences’ warning delivered by Obama’s top Africa policy official, former Ambassador to Nairobi Johnny Carson, which was a direct caution to Kenyans against voting for Uhuru and Ruto.

The Jubilee duo had responded with a campaign long on anti-American, anti-ICC, anti-West rhetoric.

Once in office President Kenyatta’s administration consciously accelerated the ‘Look East’ policies initiated by President Kibaki, turning to China, India, and the Middle East for trade and development assistance, often at the expense of traditional western partnerships.

When President Obama came calling in 2015, it was after collapse of the ICC case President Kenyatta, and he seemed keen to mend fences.

He avoided public engagements with Mr Odinga and other opposition leaders, opting for closed door meetings from where he let out that he’d lectured rejected entreaties from alternative leadership to put certain pressure on the Jubilee government.

Instead he’d lectured them on their responsibilities.

Civil society, long used to coddling from Washington, also was not happy that President Obama had not paid too much attention to their ritual complaints.

Though President Obama did use the visit to highlight the same concerns he’d raised in 2006, Jubilee was happy that he was even harder on the opposition. The wheel had turned full circle.

The tips that aided success of Obama’s visit to Kenya Reviewed by samrack on January 21, 2017 .

The tips that aided success of Obama’s visit to Kenya   I first came across the name of the man who would go on to make history as the first black President of the United States early in 1990 while a reporter at The Weekly Review, Kenya’s pioneering news magazine. We were at the time