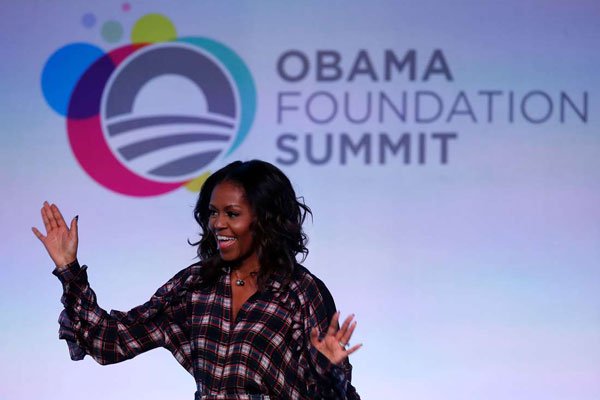 Former US president Barack Obama urged young people from around the world to press for change and embrace public service, closing a youth summit.

Singer Gloria Estefan and rapper Common were among the artists to close out the two-day summit with a concert.

“I could not have been more inspired by what I saw and what I heard from all of you,” Obama said in remarks closing the workshops and speaker panels.

Almost completely devoid of politics, the event focused on how to help the approximately 500 attending youth activists and leaders from 60 countries to better accomplish their goals.

Michelle Obama, in a candid discussion earlier in the day on Wednesday, stumbled into political territory.

“You don’t just say what’s on your mind. You don’t tweet every thought. Most of your first initial thoughts are not worthy of the light of day,” the former first lady said to applause.

But, she quickly added, “I’m not talking about anybody in particular, because everybody does that.”

The inaugural summit of the Obama Foundation, which is building the president’s library in the Midwestern city where he got his political start, was billed as an opportunity for notable young activists and leaders from around the world to learn from each other and from experts.

The attendees were nominated by peers in their respective countries or chosen from among 20,000 applicants.

The former US president has made cultivating the next generation of young leaders a centerpiece of his post-White House work.

“The goal was not to have solved every problem in a day and a half,” Obama said Wednesday.