“The Illiterate Professor” By Esther Ngotho

As I write this, I am in awe of the “illiterate Professor!” She is now 87 years old going on to 88 and I wish to share part of her achievements while I still have her.  It’s only in my 40s that I began to understand my mom Njoithi (Joyce) – I said “began…..” First of all, she had 10 of us!  Add her and dad, and we made a full American football team.  We’d only need to look for 2 linesmen and a referee and it would be a touch down! 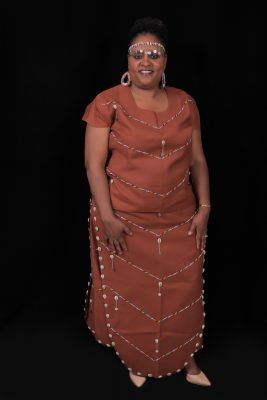 Njoithi is a severe education advocate!  Growing up, we often heard her say; “Ingitwika mwana, ingithoma ta Wangari wa Mathaai” which evolved to “Ingiari na mundu wa kundihira githomo, ingiathomire ta Wangari wa Mathaai!” As kids, our mother told us that if time could go backwards, she would become as educated as the “Green Belt Movement” founder.  And when we grew up, she changed her chorus to – if she had a sponsor or a blesser (not in the current meaning of the words) she would have become as educated as the Nobel Peace laureate! 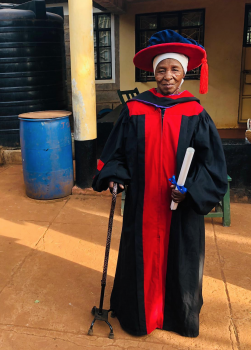 Njoithi often told us that the reason why she could not go to school was that she had to aid her windowed mother to raise her siblings.  When she was 9 years old and as the surviving first born of her family, she made trips from Gakindu to Muthinga in Nyeri (about 30 km through the bushes), carrying pots for sale all by herself.  Picturing a 9 year old girl doing this trip sends chills down my spine.  Her turning point however, appears to be when a young man from an “educated family” in her neighborhood wanted to marry her but her family and friends warned her against the perils of getting married into a wealthy educated family when you were both poor and illiterate.  It appears she swore to teach experience by eradicating both illiteracy and poverty from her family!  What is amazing however, is the way she choose to do this.  She was determined that if anything or anybody come between her and her goal, then God save that thing or person!

Over the years, she chose to eradicate poverty and illiteracy in a rather creative way for which I will always admire her ingenuity! She figured the only way to triumph over illiteracy in her case, was to educate her children! Our mother believed and told us loud and clear that; “Education is the Key.”  She did not say to what or where.  Either she was deliberately vague or did not know what this key opened but she knew it opened something or another.  She had a vision that made her conjure, coerce, aid, assist, facilitate ….her kids to excel in education.  That “Train up a child in the way he should go: and when he is old, he will not depart from it” is no longer in doubt.  As a grandmother myself I am still in school….pursuing that key to open that place or thing – whatever the case might be!

All dreams are valid including nightmares – so choose wisely! Let me paint you a picture of what this legend of a woman has done with her kids despite her poverty and illiteracy. She got her firstborn and second born in her early 20s.  Instinctively, she understood the goals of the colonial single education system (7-4(2,2)-2-3, I guess form 2 was silently in there somewhere) where a student sat exams at each level. So my eldest sister became a teacher after the second level and assisted my mom with her other kids.  My eldest brother set the pace, went Muranga and Kangaru high schools and on to the university to study B.Com. (Business finance & accounting) in the 70s and also cleared all KASNEB CPAs and CPSs and ended up holding 2 positions in a bank as the Bank accountant/Company secretary. The next kid unfortunately died at the age of 11. With her next kid, mom’s psychology followed the existing wisdom at the time, which was somehow flawed – Although this kid went to Shimo la Tewa high school then, he insisted that he only wanted to do sciences.  Unfortunately mom did not understand the physics demon and the kid’s future became oblivious (but he has recovered it by educating his 2 kids). This my mom’s kid however had the ability to provide us with electricity that emanated from the pit latrine and entertained us with movies shown on the wall from homemade projectors! The next child went to Ngandu girls and Limuru girls respectively and went on to acquire 4 university degrees and several college diplomas, the next went to Alliance boys and became an Architect, next one to Chinga girls and now has 3 university degrees, next boy went to Kiambu High and went on to acquire a university degree in Economics & Psychology (God bless his soul), the next attended Thika high and also acquired a degree in Economics and Psychology, and the last also went to Thika high then proceeded to America and is now a Pharmacist. All this was engineered by an illiterate poor village woman who we have now nicknamed; “Engineer.”  She does not know we call her that!

Like the fabled Indian tale of the blind men and the elephant, Njoithi’s 10 blind sojourners (kids) touched different parts of the mother elephant. We can all describe a unique side of the legend that our mom is.  She is an “educator,” an “entrepreneur,” an “advocate,” an “attorney,” a “fighter,” a “preacher,” an “engineer”…..name it – hence the name; “The Illiterate Professor.”

Recently, when three of my brothers and I found ourselves accidentally together in Nairobi for a short time, we decided to grant our mom her life’s wish – a degree.  We gave her an honorary Doctor of Psychology degree because she knew and practiced as much psychology as those who have spent years in school – or even more psychology ‘matter of fact!

I hope I shall one day be able to honor her by establishing an education institution….

Study finds no evidence to support property bubble in Kenya