The Centurion who owns half of downtown Nairobi 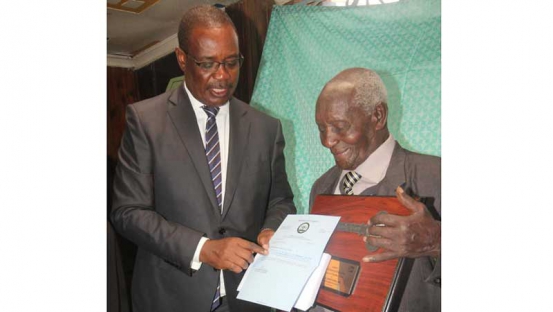 Honour. Governor gives Gerald Gikonyo key to the city and free parking for his fleet of matatus

The Centurion who owns half of downtown Nairobi

He came to Nairobi when there were no banks and only a few unpaved footpaths connecting most of the residential areas and markets. Meet Gerald Gikonyo, one of the city’s oldest residents who also happens to own a chunk of it. From his appearance, Mr Gikonyo has successfully defied the elements and lived through both natural and man-made catastrophes. Although there are no official records to validate his claim, Gikonyo estimates that he is 104 years old and the only remaining patriarch of the great capitalist boys from Rwathia village in Murang’a County. These are the old-timers that produced the legendary Rwathia Group of entrepreneurs who have for decades owned a huge part of Nairobi – a city where more than 2 million people compete for space. Ironically, it has taken the city fathers close to a century to honour Gikonyo for his contributions in up-scaling the city. ALSO READ: Seven ODM governors now get direct tickets The husband of four wives wore an infectious grin as Nairobi Governor Evans Kidero symbolically handed him the key to the city at a ceremony organised to recognise him. Key to Nairobi “This is a token of appreciation to honour your work in this county. With this key, you can move freely within Nairobi County. You are also exempted from paying the city county parking fees for your fleet of vehicles,” said Dr Kidero. The aged business magnate, who still stands upright, rarely ventures out of his Ronald Ngala Street home where he lives on the ground floor with his only surviving wife, who is ailing. The governor further indicated that the county would identify a suitable street where he owns most of the properties, and name it after him. The old man’s fleet of matatus ply various routes in the city and Central Kenya. Gikonyo, a father of 26, arrived in Nairobi 90 years ago as young man with nothing but a burning desire to earn a living. ALSO READ: Man shot dead after robbing Governor Kidero’s guard When he arrived, the label ‘green city in the sun’ perfectly fitted the city. And with the dominant Asian population, he believed he had found the perfect place to “make money”. However, he did not foresee the empire that his efforts would give him. “It was cool and well supplied with water, with a few unpaved footpaths that connected most residential areas and markets. I have not only watched Nairobi grow, I have been part of the growth,” boasted Gikonyo nostalgically. The journey to building the Rwathia empire, which owns over 65 per cent of downtown Nairobi’s property, sprouted from a simple business of hawking vegetables and selling charcoal. City outskirts Gikonyo and his friends would buy vegetables from traders who came from the city outskirts to sell their produce at ‘Marikiti’ (Wakulima Market). They would then sell it to the Asian families who dominated the city. The old man vividly recalls how Nairobi had only a few entrepreneurs and no banks when they began their investment. ALSO READ: Kidero and Miguna clash in church over Nairobi city seat He would send one of his friends back to the village with money to be kept safely by the elders, and would send for it whenever an opportunity for more investments arose. In 1947, Gikonyo established Mwihoko; General Rwathia Supplies, which has expanded over time to become more than 50 companies employing more than 100,000 people. In the same year, the groups began buying land on which they built residential and commercial buildings. But this new investment was disrupted the following year when the Mau Mau insurgency saw Kikuyus in Nairobi hounded and repatriated to restricted areas. In his quest for freedom, Gikonyo was arrested in 1951 and charged with engaging in activities that undermined the rule of the British government. He was detained together with other freedom fighters to be released two years later. But this did not deter him from growing his business – the wise old man had equipped his offspring with immense entrepreneurial knowledge and skill that would sustain his empire. Thankfully, the British colonialists called for amnesty and began allowing some Kikuyus with businesses back to Nairobi because the Mau Mau war had started taking a toll on both parties. The boys from Rwathia took up the offer.
Read more at: https://www.standardmedia.co.ke/

The Centurion who owns half of downtown Nairobi Reviewed by samrack on April 7, 2017 .

Share thisFacebookTwitterPinterestEmailWhatsAppHonour. Governor gives Gerald Gikonyo key to the city and free parking for his fleet of matatus The Centurion who owns half of downtown Nairobi  He came to Nairobi when there were no banks and only a few unpaved footpaths connecting most of the residential areas and markets. Meet Gerald Gikonyo, one of the