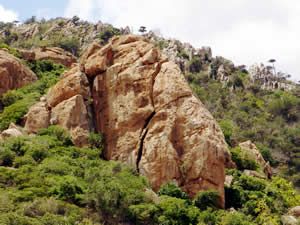 Kyamwilu, in Machakos, is a gravity-defying hill. Such hills are called magnetic hills, and although Wikipedia tries to explain the phenomemnon as such “A gravity or magnetic hill is a place where a slight downhill slope appears to be an uphill slope due to the layout of the surrounding land, creating the optical illusion that water flows uphill or a car left out of gear will roll uphill, among others.”, we still think it’s cool to watch a car go uphill in free gear.

Machakos county offers one of World’s amazing tourist destinations without
compare. A few kilometres from Machakos town towards Kangundo, there exists a wonder hill commonly known by locals as a Kyamwilu magic hill. At this place, one can go uphill on free gear for about 100 metres.

The hill has mesmerized locals, foreigners and even scientists as going against forces of gravity. Peter Kiluku, a resident of Kyamwilu says the wonder hill has provided a business opportunity for the locals who get paid to demonstrate the magic in the hill.

Peter and his group of 25 members consider the Hill as a their workplace and have to report here every morning to look out for tourists that frequent the area.

“We charge Ksh2,000 for foreigners and 200 for local tourists to help them understand what exactly happens here. Many people really get amazed when objects including heavy vehicles go uphill without a push.

“How was this place discovered, I ask,?” “In the colonial days;” Peter tells me, “there was a colonialist who stopped his vehicle downhill to fetch water from a nearby dam in the Valley to cool his car engine. On returning he found his vehicle had moved on its on uphill for about 100 meters. The man was very shocked as there was no one that could have moved his car while he was away. The hill has since become a site of tourist attraction.

According to local residents, the strange happenings at Kyamwilu were discovered by a white settler who parked his vehicle by chance on that section of the road. He parked his car at the site with the gears free to go downstream to get water for his car engine. Upon returning he was stunned to find that the vehicle had moved about 50 metres up.

Locals also say that there is a tale of two brothers that had married the same woman who used to take turns visiting each of their houses. One lived on the lower side of the hill and the other on the upper side. When she passed away, the tale concludes that the woman was buried between her two husbands around where the magic hill is situated. The story behind the tale is that, it is a rare practice for two men to be married to one wife hence perhaps the reason why forces of nature conspired.

To date, scientist are unable to explain the reason behind this phenomena that defies the power of gravity.

Tale aside, local tourists I interviewed say it is an experience worth your time and money.

The amazing Kenya magic hill that defies gravity Kyamwilu, in Machakos, is a gravity-defying hill. Such hills are called magnetic hills, and although Wikipedia tries to explain the phenomemnon as such “A gravity or magnetic hill is a place where a slight downhill slope appears to be an uphill slope due to the layout of