Terror angle in probe into siege on DP Ruto’s home 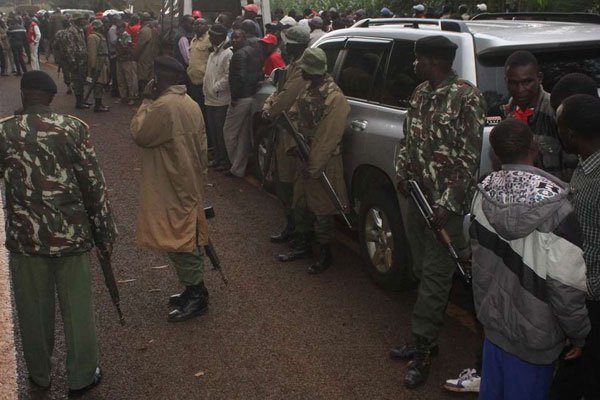 Police and members of the public on July 29, 2017 gather near the home of Deputy President William Ruto in Sugoi, Uasin Gishu County, which had been invaded by one assailant. Calm has now been restored. PHOTO | JARED NYATAYA | NATION MEDIA GROUP

Terror angle in probe into siege on DP Ruto’s home

Questions emerged Sunday over how a security lapse allowed a lone hawker to lay a 19-hour siege at the Sugoi home of Deputy President William Ruto on Saturday.

The man, identified by locals as a well-known hawker in the area, was gunned down Sunday morning by an elite squad drawn from the General Service Unit.

Police officers are treating the matter as an act of terror.

FRIEND
Inspector-General of Police Joseph Boinnet was queasy on revealing the identity of the attacker, but locals in Sugoi told this newspaper that he was well known in the area and a friend of the security officers at the DP’s residence.

He freely interacted with them in the course of his hawking rounds in Jua Kali and Turbo, they added.

“He has been frequenting our neighbourhood in the company of others to sell shoes, clothes, and cheap perfume,” a resident who requested anonymity said

Mr Meshack Tuwei, a neighbour of Mr Ruto who was among the first to arrive at the scene when the first gunshot was fired on Saturday afternoon, said the DP’s compound is usually heavily guarded, and that the assailant must have schemed well before gaining entry.

The police statement came in the wake of conflicting reports about what really happened at the home, by any measure, one of the most guarded installations in the country.

ARMOURY
Some locals had earlier claimed that four men — on a motorbike and others on foot — had approached the main gate to the residence and told a GSU officer manning the gate that workers at the residence owed them money for wares they bought from them.

A confrontation ensued, and one of the men whipped out a machete and attacked the sentry, the locals alleged, adding that the attackers then snatched a gun from the wounded officer before heading for the armoury.

But their claim was on Sunday refuted by Mr Boinnet, who said the siege only involved a lone gunman.

VERSIONS
In the wake of information vacuum from Sugoi over what really happened, several versions of the story were floated before the IG issued a statement.

A slightly different version from the official police position explained that on Saturday afternoon, a hawker approached the sentries at the gate to the DP’s residence and requested for drinking water.

After a short while, he requested to be allowed through the gate for a short call.

But before he could be let through, one of the sentries excused himself and walked into the compound, leaving the intruder at the gate in the company of only one guard.

Seeing an opportunity to strike, the hawker swiftly whipped out a machete and attacked the guard.

His senior, who had excused himself, heard the commotion and came out only to be confronted by the man, who cut him on the head, hand and leg as he ran towards the second gate to seek reinforcement.

RECCE SQUAD
The officers at the second gate responded with gunshots, forcing the man to run back towards the armoury, where he cut his way through and took ammunitions, a pistol, and a police jacket.

It was from that vantage point that he engaged the Elite Recce Squad of the General Service Unit, the Kenya Police and the Administration Police officers for close to 20 hours before he was gunned down, Mr Boinnet said Sunday morning.

FIREARM
The IG appeared to corroborate the two versions of how the attack unfolded when he said that the unidentified man had gained access to the compound after injuring a sentry at the gate.

“In the process however, and in circumstances we are yet to establish fully, the intruder managed to seize his rifle,” Mr Boinnet said, unable to explain how a single machete-wielding man could grab a gun from well-trained sentry.

After taking the gun, and as the other police officers started responding to the intrusion, the attacker took shelter inside a building under construction and shot at any one trying to access the area, Mr Boinnet added.

“He gained access to the armoury box by forcing it open using the weapon he had,” Mr Boinnet said, but insisted that the main armoury was still intact.

“Specialist police officers were dispatched to the area to bring the standoff to an end.

“Several attempts to access his hideout failed; hence an armoured personnel carrier was summoned to give officers cover to deal with the threat posed by the intruder,” Mr Boinnet said during a press conference in Nairobi.

KILLED
In the morning, he added, the intruder was killed and the body of a police officer who had gone missing was found in a building under construction within the compound.

There were many workers at the homestead at the time of the attack and the situation could have been worse had the intruder gained entry into the main house, sources said.

UNITY
Mr Ruto, speaking about the attack for the first time, said it was meant to cause tensions and disunity among Kenyans.

“I know many people are aware that I had visitors yesterday,” the DP said on Sunday, pejoratively referring to the slain man as a visitor, “but I want to say that those who think they will frustrate our unity or undermine our progress will not succeed”.

He was speaking in Murang’a during the installation of Bishop Timothy Gichere as head of the Mt Kenya Central diocese of the Anglican Church of Kenya.

SAFETY
Mr Boinnet said the standoff had taken long to contain because the operation had to be carefully executed in order to ensure the safety of the occupants of the house, the police officers carrying the operation, and the locals milling around the residence.

“It was not inordinately long, considering that the operation was a delicate one,” the IG, flanked by the Deputy Inspector-General of Police Joel Kitili and the Directorate of Criminal Investigations Ndegwa Muhoro, said.

Terror angle in probe into siege on DP Ruto’s home Reviewed by samrack on July 30, 2017 .

Police and members of the public on July 29, 2017 gather near the home of Deputy President William Ruto in Sugoi, Uasin Gishu County, which had been invaded by one assailant. Calm has now been restored. PHOTO | JARED NYATAYA | NATION MEDIA GROUP  Terror angle in probe into siege on DP Ruto’s home In