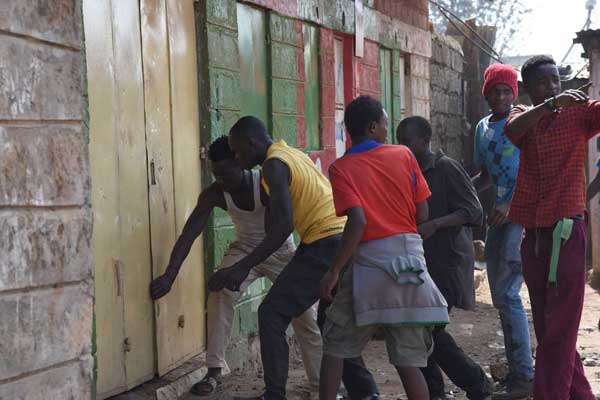 Tension remains high in the city’s Kawangware 56 a day after three people were killed as two rival groups of youths clashed.

However, the number of those killed could be more even as it emerged that the police collected about 15 bodies from the area on Saturday morning with others feared to be in the trenches and sewer lines.

According to sources, many of the bodies had cuts from sharp objects, wounds inflicted by crude weapons as well as gunshot wounds.

Residents said that a gang of about 80 youths suspected to be from the neighbouring Waithaka moved around the area on Saturday screaming “No peace! No peace!” as they wielded machetes, rungusand other crude weapons.

A Woman cries after opposition supporters tried to enter her residence in Kawangware on October 28, 2017 amid looting and chaos. PHOTO | EVANS HABIL | NATION MEDIA GROUP

About 10 people were reported to have been injured in the incident by 6.30pm Saturday.

It is not clear how the situation will go on in the days to come but terrified residents said that their lives are on the line.

“A good number of them were naked. They are really terrorising the people here. People can’t sleep, others can’t go to their houses for fear of attacks.

“It has been an entire moment of agony that does not seem to end any time soon,” a resident who did not wish to be named told Daily Nation.

Residents also said that not even the heavy presence of police has helped.

A man tries to break into a shop in Kawangware 56 using a stone on October 28, 2017. Criminal gangs took advantage of the tension in the area and started looting. PHOTO | EVANS HABIL | NATION MEDIA GROUP

During the incident, vehicles among them matatus were set ablaze as the number of casualties remained unknown.

“Right now we have loads of police officers in their lorries patrolling the area but they haven’t done anything. They are just laughing away the situation. In fact, the group that is screaming “no peace, no peace” passed where the police were but they did nothing as they melted into the crowd,” the witness added.

Abaluhya Alternative Leadership Forum chairman Mr Mathews Okwanda urged the government to move in, restore order, investigate and prosecute those behind the killings.

“This is anarchy and the whole world is watching. The first duty of the State is to protect its people regardless of race or political affiliation. Therefore, a state that cannot guarantee safety of its citizens has no business calling itself sovereign,” Mr Okwanda said.

Mr Okwanda urged Dagoretti North MP Simba Arati, Nairobi County Assembly Speaker Beatrice Elachi and other leaders to help save the situation which he said is likely to degenerate into genocide if it continues to persist.

“I hope this is not politics. Our leaders told us clearly that those who want to vote should exercise their right by doing so. Equally, those who don’t want to should stay away. The reason why people are checking others on the fingers to find out whether they voted or not is just disturbing,” he said.

He continued, “There is no peace where there is no justice.”

As the situation got out of hand, criminal gangs took advantage and started looting.

Houses and shops were broken into, property carted away as gunshots rent the air with the area also experiencing power blackout.

All the shops at the junction of routes 56 and 46 including butcheries, hotels and salons were burnt down.

Tension high as gangs terrorise Kawangware residents Tension remains high in the city’s Kawangware 56 a day after three people were killed as two rival groups of youths clashed. However, the number of those killed could be more even as it emerged that the police collected about 15 bodies from the area on Saturday morning