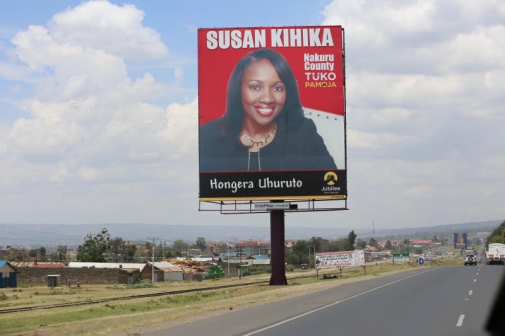 Nakuru County Assembly Speaker Susan Kihika has defended her campaign which some claim has been expensive and beyond her means. Speaking during a live interview on KTN News on Wednesday night, Ms Kihika admitted running a well-oiled and organised campaign, which she said was sponsored by her family, friends, supporters and well-wishers. “I’m serious about being the next senator of Nakuru County and that’s why I have given the campaign my all,” she said. A civil rights group has written to the Ethics and Anti-Corruption Commission (EACC) asking it to probe her source of wealth, claiming her salary cannot sustain such a vibrant campaign. Her campaign has been flashy with state of the art vehicles and at times helicopters. She started the campaign in February 2015 and has sustained the tempo to date. Kihika, the daughter of late politician Kihika Kimani, said her record as the Speaker of the county assembly and experience as a lawyer had given her advantage against her competitors. ALSO READ: Human rights body seeks clarity on standards of integrity She will be vying for the Jubilee Party ticket against veteran politicians Koigi Wamwere and Njenga Mungai. Others in the race for the ticket are Rev Wambui Mambo, Karanja Kabage, Matagaro Omae, Jack Waihenya and Andrew Yatich. The current senator James Mungai is contesting for governorship as an independent candidate. Meanwhile, aspirants for various seats in the county have pledged to maintain peace during the nominations.
Source: https://www.standardmedia.co.ke/

Ms Susan Kihika’s campaign billboard along Nakuru-Nairobi highway. [Kipsang Joseph, Standard] Susan Kihika defends her high-profile campaign Nakuru County Assembly Speaker Susan Kihika has defended her campaign which some claim has been expensive and beyond her means. Speaking during a live interview on KTN News on Wednesday night, Ms Kihika admitted running a well-oiled and