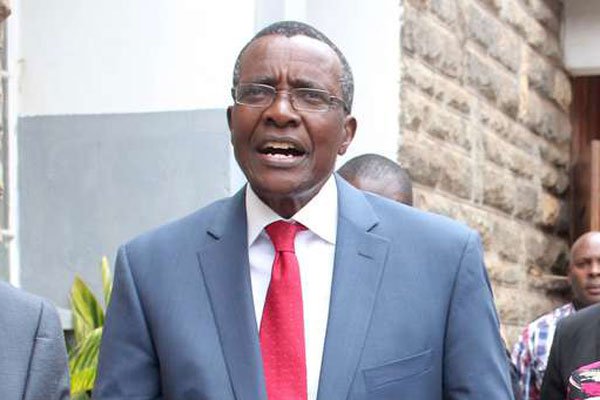 Supreme Court judges were conspicuously absent as President Uhuru Kenyatta addressed the first sitting of the 12th Parliament on Tuesday.

Their rooms (committee rooms 7 and 9 in the National Assembly), where they were supposed to sit before making their way to the gallery, were still empty by the time the President made his way to Parliament Buildings and finally to the National Assembly’s debating chamber.

It was, however, not clear why the judges had been allocated two rooms given they are only seven.

INVITATION
Sources at the Judiciary said the judges were not sent direct invitations by Parliament as they had expected.

The invitations, it was said, were sent through the Registrar of the Judiciary.

National Assembly Speaker Justin Muturi said the invitations were sent to the Registrar of the Judiciary who was supposed to invite the judges to the reopening of Parliament.

“The clerk (to the National Assembly) told me he invited them. They must have written to the Registrar,” he said on the phone.

PETITION JUDGMENT
Asked why they were not sent direct invitations, Mr Muturi said: “We don’t do it that way. I was told they were invited and their seats were reserved on the side where I sat. I wouldn’t want to cast aspersions on them, though.”

The judges are expected to finalise their judgment on the decision that annulled President Kenyatta’s victory on September 1.

They have 21 days from the date they delivered their ruling to finalise their judgment.

REHEARSAL
Security was tight within and outside Parliament Buildings as preparations for the presidential address went on.

Plainclothes officers took over the security of Parliament from the usual parliamentary orderlies.

At around mid-day, Mr Muturi and his Senate colleague Mr Ken Lusaka were taken through a rehearsal on what was expected of them on the President’s arrival.

As has been the case, Mr Muturi is supposed to walk on the President’s right side and Mr Lusaka on the left.

ARRIVAL
Although Mr Muturi is familiar with the proceedings, Mr Lusaka found himself in a new environment and had to be taught how to march with the President.

Mr Lusaka also bowed twice as they entered the chambers after realising that he had been too quick to do the honours.

He was received by the Chief of Defence Forces General Samson Mwathethe and other army generals.

SPEECH
President Kenyatta followed five minutes later. He was received by Gen Mwathethe and his deputy before inspecting the guard of honour mounted by the Kenya Defence Forces on Parliament Road.

At exactly 3.30pm, the President made his speech after prayers from the religious leaders and, by 3.53pm, he had concluded his remarks.

A host of Cabinet Secretaries among them Cleopa Mailu (Health) and Fred Matiang’i (Education) followed the proceedings from the Speaker’s gallery.

Also present were US Ambassador Robert Godec and Ms Sahle-Work Zewde, the director-general of the United Nations Office in Nairobi.

Mr Alfred Sambu (Webuye West) was one of two Opposition MPs in attendance.

Nasa co-principal Moses Wetang’ula, who is also Bungoma senator, was spotted in the corridors of Parliament before the President’s arrival.

He, however, clarified that the agreement was to boycott the sitting within the chamber.

Supreme Court judges skip opening of House Supreme Court judges were conspicuously absent as President Uhuru Kenyatta addressed the first sitting of the 12th Parliament on Tuesday. Their rooms (committee rooms 7 and 9 in the National Assembly), where they were supposed to sit before making their way to the gallery, were still empty by