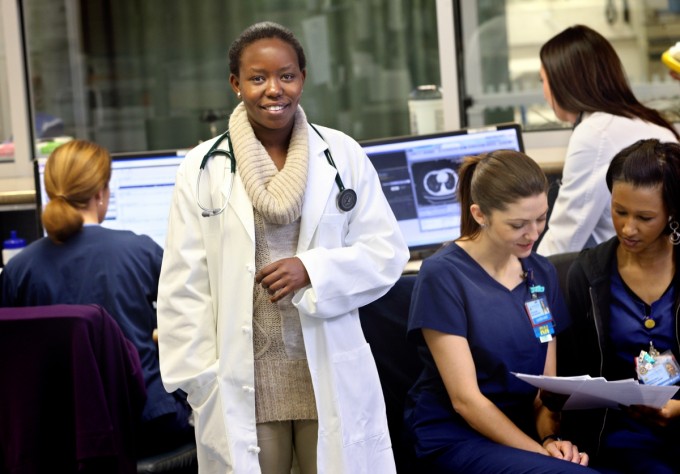 Gloria Kotente Mumeita is a Kenyan medical student who earlier this month completed electives for her degree at Bethesda’s Sub..

In a place where forced marriage and teen pregnancy is the cultural norm, Gloria Kotente Mumeita was one of the lucky ones.

Born the third of seven children, Mumeita was raised in Kenya’s Kajiado District. Growing up in a large family in rural Kenya traditionally leaves few opportunities for upward mobility. Although she was one of the highest-ranking students in Moi Girls Secondary School, an inability to pay school fees often left her unable to attend class, threatening a return to a life where her future is not her own to decide.

Thanks to a scholarship provided by the nonprofit Maasai Girls Education Fund based in Washington, D.C., Mumeita, 23, is now a medical student at the University of Nairobi and just completed electives for her degree at Bethesda’s Suburban Hospital, having flown home Dec. 10.

“Gloria is, thus far, the only of our more than 150 [girls] that have gone to school to get an education to get to medical school,” said Tracey Pyles, an emergency physician at Suburban Hospital who helped arrange Mumieta’s eight-week stateside program. “In fact, she is the only Maasai woman now enrolled at the University of Nairobi School of Medicine and one of only very few—we know of only two other Maasai women in the world who have ever had the opportunity—to become a doctor, so Gloria will be the third.”

Pyles is president of Maasai Girls Education Fund, the fund started by her mother, Barbara Lee Shaw, in 2000 to improve the lives of Maasai girls and women through education. Shaw, who died of cancer in 2013, created the fund after she fell in love with the Maasai people and one curious and bright young girl in particular during a 1999 photography trip to Kenya’s Kajiado County.

Entranced by the girl, Shaw asked the girl’s family if she could fund her education after learning the child would likely be married at an early age and “never really have a chance at any status or independence or say in her life,” Pyles said.

“Mom didn’t go there with the idea that there was somebody to save,” she said. “She went there on a photography project, an artist who fell in love with some of the people and wanted to make a difference in those individual lives,” Pyles said. The fund “grew sort of organically to be something where, through continuing to love and respect the local culture and people, it became also something that is helping them take control of their own futures.”

MGEF is need-based rather than merit-based, one of the fund’s most important founding principles, according to Pyles. Scholarships are all-inclusive and cover school fees, room, board, and personal and school supplies. Depending on a girl’s level of schooling, scholarships range from $1,000 to $2,000 a year, according to the MGEF webpage.

During a visit to Kenya last summer, Pyles asked Mumeita during dinner if she would be interested in pursuing electives needed for her medical degree at a hospital in the United States.

“One of the things that impressed me about her was that initially she wasn’t so sure,” Pyles said. “Her first reaction was, ‘I don’t know, because I don’t know how useful what you guys do in your country is going to be for me trying to practice medicine back here.’ I mean, what a selfless response. Shortly thereafter, I think her friends were like, ‘Wake up! Of course you’re going!’”

While at Suburban Hospital, Mumeita participated in rotations in radiology, otolaryngology and surgery. Mumeita is not sure what she wants to specialize in, but she is interested in interventional radiology, which provides a minimally invasive image-guided diagnosis and treatment of diseases.

“I’ve seen a lot of things, so many things that if I did my rotations in Kenya, I would not have seen,” she said.

Upon completing her degree, Mumeita, like many other Maasai girls who are supported by the fund, plans to take her medical knowledge back to Kajiado so that she can help improve her community.

“Now many of our graduates have gone back, and they’re teaching in their own communities and showing these girls [that] not only can you become something, but you can come back here and make a difference in other people’s lives,” Pyles said.

In a patriarchal society where educating women is against the cultural norm, Pyles stressed the positive impact of the young women returning to their communities after earning their degrees.

“As we get more and more girls educated, not only are they impressing their families and changing the way their fathers and uncles and peers think of educated women, they are also making a big difference in the younger girls’ lives who see them now as representatives of what they themselves can become,” she said.

Mumeita already has made an impression on the younger girls in Kajiado, Pyles said. She often returns to teach workshops through MGEF.

“She’s gone back and made such a difference already and been a great sort of hero to a lot of the younger girls who sometimes won’t even believe she’s Maasai until she speaks Maa. Kids who don’t believe that she could possibly be Maasai have her prove it because she’s so successful,” Pyles said. “What does that say about what they think of their own ability to succeed? And how can you imagine how much that impacts their understanding of what they can actually do some day?”

In Mumeita’s community, family responsibilities trump education, so girls are expected to complete household chores, such as fetching water or firewood and feeding the family’s animals, after finishing the school day, if they even attend school at all.

Mumeita realizes that many girls aren’t as fortunate as she was and may lack their family’s support for their education. “I was one of the lucky girls. My father supported my education,” Mumeita said. “He’s a really good man.”

Shaw wanted to be sure the girls supported by the fund could be students first and foremost, so she sent them to boarding schools “where it’s all girls, where they have the luxury of electricity, and food that they don’t have to prepare and water that’s clean and the basics are taken care of so they can learn,” Pyles said.

Over the years, more Maasai girls began reaching out to Shaw, looking for an alternative to early marriage, pregnancy and limited freedom. In the beginning, MGEF relied on individual donors funding one student’s full education beginning in primary school. The fund has expanded to include a general fund, where donors can make one-time donations or contribute regularly in the amount they choose, which could then be split to cover other existing expenses.

For the price of purchasing coffee at Starbucks for a month, “you can completely change somebody’s life,” Pyles said. “I mean, putting a girl through school for $100 a month who otherwise is going to be married and have a kid next year and is the same age as your seventh-grade daughter, it’s huge.”

Shaw dedicated the last 14 years of her life to MGEF, making several extended trips to Kenya each year where she got to know all of her Maasai girls personally. She didn’t want MGEF’s integrity to be lost if under the direction of another organization after her death, so Pyles took over as president, safeguarding her mother’s legacy.

“It’s quite a responsibility, but at the same time, I’m amazed how much I get back every day,” Pyles said. “It’s amazing what we do.”

Share thisFacebookTwitterPinterestEmailWhatsAppSuburban Hospital Helps Kenyan Woman Pursue Medical Degree  Gloria Kotente Mumeita is a Kenyan medical student who earlier this month completed electives for her degree at Bethesda’s Sub.. She could become only the third Maasai woman to become a doctor In a place where forced marriage and teen pregnancy is the cultural norm, Gloria