A man was killed in a grisly road crash on Wednesday night after his car rammed into a lorry along the Southern Bypass in Nairobi.

Confirming the incident, Lang’ata OCPD Benjamin Mwanthi said the driver of the BMW X5 is suspected to have been speeding when he lost control and hit the truck from behind.

“We suspect the driver of the BMW was speeding on the fast lane when he crashed into the rear part of the loaded lorry,” Mwanthi said.

The driver died on the spot and his body was moved to City Mortuary while the wrecked luxury vehicle was towed to Lang’ata Police Station.

Mwanthi dismissed claims that the accident may have been caused by poor lighting, saying lighting along the section of the highway, which is adjacent to Wilson Airport, is controlled to avoid misdirecting aircraft.

Investigations are underway to establish the actual cause of the crash. 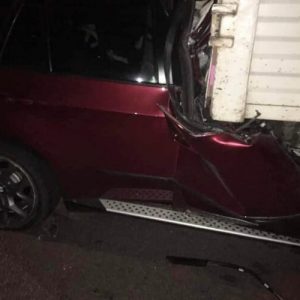