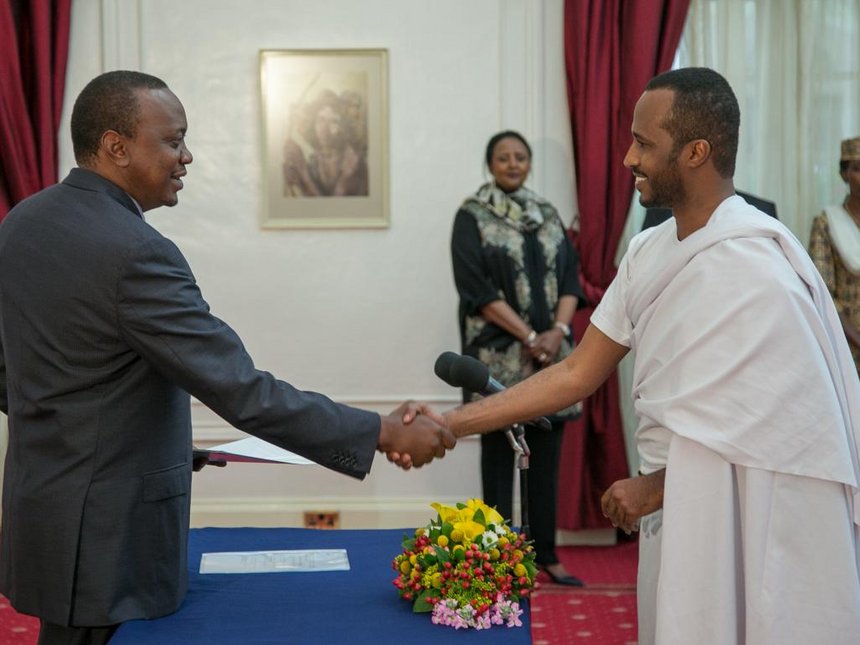 Gamal Mohamed Hassan- Ambassador of the Federal Republic of Somalia when he was received by President Uhuru Kenyatta at State House in August 2015. /PSCU

Somalia has reacted angrily to Cord leader Raila Odinga’s remarks that the international community recognises Somaliland as an independent state.

Raila reportedly said at Chatham House, London where he delivered a speech, that he supports the full recognition of the break-away semi-autonomous state.

“I am a strong supporter of the full recognition of Somaliland. I think there is a very strong case,” he said said during a question and answer session at the forum.

But Amb Hassan dismissed Raila and said: “That comment was in a bad taste. It questions the territorial integrity of Somalia,”

“Politics of Somalia should be left to Somalis. Politicians should refrain from such issues,” Hassan said.

In a different response posted on Twitter, the embassy in Kenya termed the comment by Raila as “damaging”.

“Unity, sovereignty and territorial integrity of Somalia is inviolable,” the embassy said.

Somaliland whose capital is Hargeisa is not internationally recognised as an independent state but mainly referred to as semi-autonomous.

It declared independence from the larger Mogadishu-based Somalia in 1991, following the collapse of the government led by Siad Bare.

But it has not been recognised internationally yet.

Raila’s comment comes a week after the chair of council of governors, Peter Munya called for “some recognition” of Somaliland.

He spoke after he led a Kenyan delegation to Hargeisa in a bid to convince leaders to remove restrictions on Miraa trade.

“In my deliberations with top government officials, I managed to convince the government to appoint a technical committee to review the duty in exchange of some form of recognition of the Republic of Somaliland by the Kenyan government,” Munya, who is also the governor of Meru, said.

Munya said that the miraa market in Somaliland is worth about Sh40 billion.

Somalia furious at Raila’s call for Somaliland independence Reviewed by samrack on August 2, 2016 .

Gamal Mohamed Hassan- Ambassador of the Federal Republic of Somalia when he was received by President Uhuru Kenyatta at State House in August 2015. /PSCU Somalia furious at Raila’s call for Somaliland independence Somalia has reacted angrily to Cord leader Raila Odinga’s remarks that the international community recognises Somaliland as an independent state. Ambassador Gamal