From left: Jumia Head of Mobiles Anjanesh Chaubey, Xiaomi Sales Manager Grace Ngure and Jumia MD Sam Chappate during the Launch of the 4th Mobile White Paper at the Hilton Hotel in Nairobi

Jumia Kenya has released its fourth mobile whitepaper which indicates smartphone connections are expected to increase two-fold in 2020 to about 200 million, therefore, accounting for 25 percent of all mobile connections in 2016.

Additionally, mobile services and technologies produced $110 billion of economic value in Sub-Saharan Africa which is the same as 7.7 percent of GDP in 2016.

Currently, mobile subscriptions have increased by 3 percent to 41 million, with 90.4 percent of the adult population owning a mobile phone.

Increased mobile penetration in Kenya is attributed to aggressive entrants into the market like Transsion Holdings which provides affordable brands like Techno, Itel, and Infinix.

Hong Kong-based Transsion Holdings has the largest smartphone and feature phone market share in Kenya according to Q317 results released by International Data Corporation (IDC). Samsung holds a 17 percent market share due to the budget-friendly J-series. 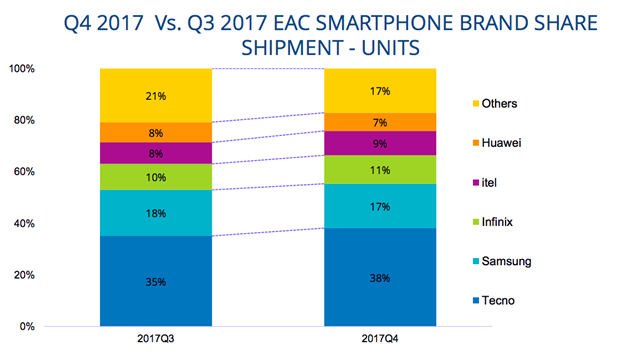 As new brands such as Oppo, Vivo, Xiaomi, and Gionee enter the market, smartphone prices could go down.

Jumia Kenya reported a 25 percent increase in smartphone sales in 2017 compared to 2016. The online shop sold more than 250,000 smartphones last year, with 97 percent smartphones and 3 percent feature phones. Furthermore, prices stabilised at an average of $90 in 2017 with 68 percent of the sale taking place in Nairobi.

Increased sales in high-end devices are as a result of the rising demand for 4G.

Globally, internet users increased by 20 percent y/y growth. In Kenya, the Communications Authority of Kenya (CA) reported that 86 percent of the Kenyan population has access to the internet.

“Jumia Kenya for the first time ever in 2018, has seen more orders coming from mobile devices (mobile web and app) than desktop. The majority of traffic to the website continues to come from mobile devices (mobile web + app), but historically conversion rates were lower than on desktops. This reflects the growing importance of the smartphone, and trust in the Jumia brand (as customers less often feel the need to have a bigger screen to make their purchase decision),” the white paper states.

Smartphones in Kenya have been a gateway to increasing financial inclusion through M-Pesa and other mobile financial services. Kenya has more than 25 digital credit lenders. In 2017, Jumia introduced a vendor lender program for SMEs.

Meanwhile, the company has announced that the annual Jumia Mobile Week returns from March 19th to March 25th, 2018. During the 7 day event, there will be massive offers and discounts on all smartphone brands, promotions and other great deals. Some of the major brands that will be sold at a discount include: Samsung, Iphones, Tecno, Infinix, Huawei, Nokia, iPhones and a new phone brand from the US dubbed Kaios.