Show us your achievement in Mombasa, Uhuru dares Joho 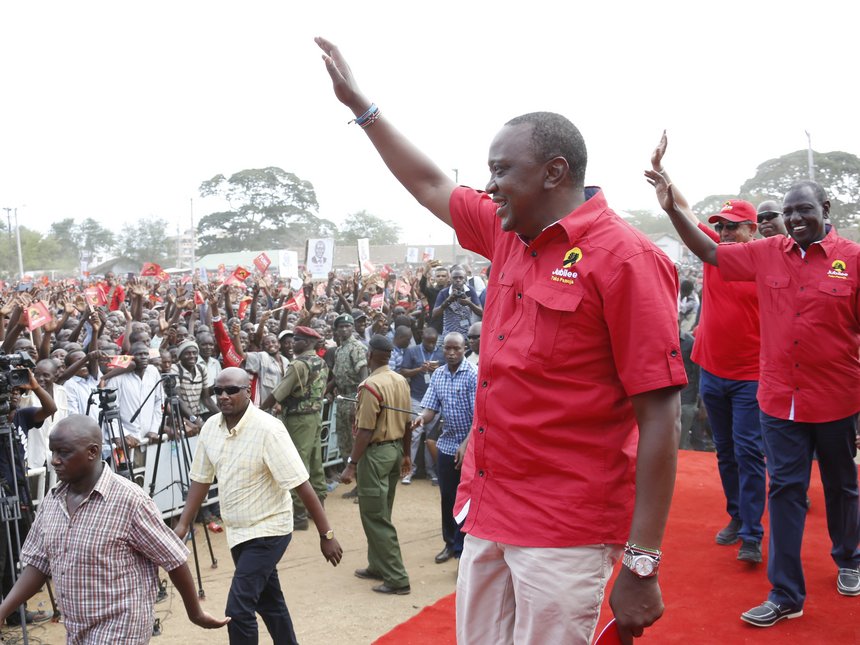 Show us your achievement in Mombasa, Uhuru dares Joho

President Uhuru on Sunday hit back at Mombasa governor Hassan Joho saying he has been riding on projects initiated by his administration.

Uhuru challenged Joho to enumerate his achievement in Mombasa before resorting to insulting him and his government’s projects.

He said his government has released over Sh 40 billion to the Mombasa county government but there is nothing to show for it.

“Tell the residents what you have done with the over Sh40 billion to transform their lives,” Uhuru told Joho.

He spoke at the Tononoka ground during a Jubilee rally.

On January 5, Joho accused Uhuru of riding on donor-funded projects and taking credit for them.

“What we want to hear being announced is that the Jubilee government will leave behind a few billions for several projects,” Joho told Uhuru to his face in Bamburi, Mombasa.

This was after he accused Uhuru of taking credit for the World Bank-funded Buxton footbridge project.

However on Sunday, Uhuru said Joho has been positioning himself close to him whenever he comes to launch projects so he can appear in photographs together with him.

“The other day we went to Old Town to initiate street lighting projects, together with all of them who are today insulting me, so they can have security and work late into the night. Today they say the work was done by the county government and they know who did the work,” said Uhuru.

He said Joho rushed to Kongowea market last Friday to allocate traders stalls in the new retail centre yet his government is the one that built the centre at a cost of over Sh400 million.

“After six months instead of having left traders to do business there, it is only now that he is rushing there because elections are near. What have you been doing with the market for six months?” said Uhuru.

He said the lies the opposition politicians peddle are what angers him, otherwise he has no problem with anyone.

“The governor, when we go to the port, he stands next to us wanting to take photos with us while we launch the expansion of the port. When we go to roads, he is there, he wants to be with us,” said the head of state.

He said before he came to power, only 400 primary schools in Mombasa were connected to electricity but his administration increased the number to over 1,000.

“When we issue titles deeds, you say they are fake.Okay, let them be fake. When we build roads, you say, they are funded by Europeans. Okay, let it be the Europeans’ but the road is built.

“When we bring water, you say it is your right….Instead of wasting time disputing what Jubilee has done, explain what you have done with the Sh40 billion that Jubilee has given you to transform the lives of Mombasa residents,” said Uhuru.

He said Jubilee is looking for leaders who are respectful, development conscious and do not chest-thump.

That is why they have roped in Kwale governor Salim Mvurya, Tana River’s Hussein Dado, and many other Coast leaders, he noted.

The President also asked Mombasa residents to elect Suleiman Shahbal as the Mombasa governor in August 8.

He said Shahbal is development conscious, is respectful and does not discriminate against anyone.

“Give us people who we will work together with,” said Uhuru.

Earlier, Shahbal said if elected governor he will wipe out all the drug peddlers and small time drug dealers within 100 days.

Show us your achievement in Mombasa, Uhuru dares Joho Reviewed by samrack on March 12, 2017 .

Share thisFacebookTwitterPinterestEmailWhatsAppPresident Uhuru Kenyatta and his deputy William Ruto waves to a crowd at Tononoka grounds. photo/KIMANI CHARLES Show us your achievement in Mombasa, Uhuru dares Joho President Uhuru on Sunday hit back at Mombasa governor Hassan Joho saying he has been riding on projects initiated by his administration. Uhuru challenged Joho to enumerate his