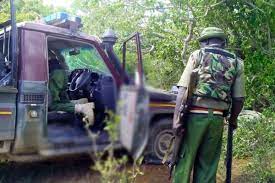 A Kenyan police official says that seven soldiers have been killed and one is missing in Lamu county after a bomb and ambush by Islamic extremist al-Shabab rebels from neighboring Somalia.

The attack happened just days before President Uhuru Kenyatta is to launch a multi-million dollar port in Lamu county on Thursday.

The police officer, speaking on Wednesday, insisted on anonymity because he is not authorized to speak to the press, as Kenya’s military does not like to make public reports of significant losses.

The military had said that the soldiers were on routine duty in the Baure area of Lamu county were attacked Tuesday morning after their vehicle ran over an explosive device along the Bodhei-Kiunga road. No deaths were reported or details about the attack.

Al-Shabab has vowed revenge on Kenya for sending its troops to support the Somali government against their jihadi rebellion. Kenya has had soldiers in Somalia since 2011, when it deployed its military to fight the extremists after several visitors from Western countries were kidnapped on Kenyan soil, threatening the country’s tourism industry, a key pillar of the economy.

Earlier this month, at least two people were killed in Lamu county near Kenya’s eastern border with Somalia when their vehicle ran over an explosive device suspected to have been planted by al-Shabab.

It was the second attack in two months targeting vehicles delivering supplies to a construction site where Kenya is building a fence and trenches along the Somali border to prevent extremists, bandits and illegal immigrants from entering the East African country.

A security expert says al-Shabab will be a threat to the new port, which is estimated to cost $410 million.

“Increased Shabab activities within Lamu county have the potential to interfere with road traffic to and from the port facilities, threaten the lives and safety of permanent workers and even raise revenue for terrorism by extorting money from port users much as is done in Somalia,” said security analyst and former U.S. Marine Andrew Franklin, who is a longtime resident in Kenya.

Somalia has not had an effective central government since the 1991 overthrow of dictator Siad Barre by warlords who then turned on each other. Since 2006 al-Shabab’s Islamic extremists have been trying to overthrow Somalia’s weak government, which is backed by the United Nations, the African Union, and several Western countries.

Seven Kenyan soldiers killed in jihadi ambush in Lamu county Reviewed by samrack on May 19, 2021 .

Seven Kenyan soldiers killed in jihadi ambush in Lamu county A Kenyan police official says that seven soldiers have been killed and one is missing in Lamu county after a bomb and ambush by Islamic extremist al-Shabab rebels from neighboring Somalia. The attack happened just days before President Uhuru Kenyatta is to launch a multi-million