Service to God and the Country: Rev. Carl Philip Kihato 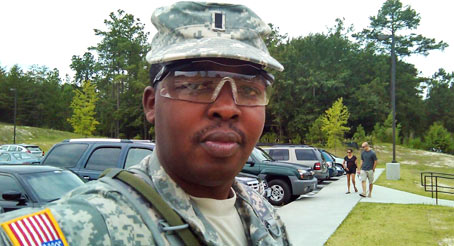 It is a big challenge to serve in the Military especially if you are a Christian. Only a few in the Kenyan American community living in the New England region have tried. Rev. Kihato is one of them. He joined the US Army as a Chaplain Candidate in April 2007, shortly before relocating from Kenya. The US Army Chaplain Candidate program is a special program of recruiting Seminary students to fill its ranks as Chaplains in the future when they graduate with their Masters of Divinity.

Chaplain Candidates are fully commissioned Officers in the Army Reserve and serve in a unit in their home State like all other soldiers. Apart from their academic qualifications, they are also required to finish a 3 month Army course known as Chaplain Basic Officer and Leadership Course (CHBOLC) taken at the US Army Chaplain School at Fort Jackson, South Carolina. Upon meeting these 2 and other requirements, one is accessioned as a Chaplain. Most unit Chaplains are Captains.

Rev. Kihato took the first 6 weeks of CHBOLC in the summer of 2007. He then went for a practicum at Fort Carson, CO the same year. He has also taken practicums at Hohenfels, Germany (2008) and Fort Benning, GA (2011). He is currently assigned to the 804th Medical Brigade at Fort Devens, MA. On Friday, 19th August 2011, he will be graduating from the Chaplain School after completing the last 6 weeks of CHBOLC.

He has helped many other people in the community to join the Army. He will also be graduating from Gordon Conwell Theological Seminary at South Hamilton in May 2012 with a Master of Arts degree in Religion and World Missions & Evangelism.

Rev. Carl Phillip K. Kihato is the Senior Pastor of ANTOR Christian Church in Rockland, MA. He is a gifted man of God who has served in different churches and ministries in different capacities. He began his Christian ministry as a Youth Director & Evangelist with New Bethany Ministries & Churches. He later left that ministry and founded Hagios International Ministries which he served as Pioneer Director for a few years. He was then appointed an Evangelist in Charge of Schools and Colleges by Christian Prayers Church, Nairobi, a position he held for two years. He then joined New Covenant Gospel Church and planted a new church at Kangema Town in Central Kenya where he served for two years before relocating to the US.

Rev. Phillip also planted a few more churches in the Central Province of Kenya, where he also served as Regional Overseer. While studying at Daystar University, he served as the Chairman of the Missions and Outreach Team for one year. He is married to Mrs. Anne M. Phillip and they are expecting their first born child this September. He is the Vice-Secretary of Kenyan American Pastors’ Fellowship (KAPF); the President of Holy Fountain Ministries Inc; and a Co-President of Springs of Life Evangelistic Association.

The main job of a Chaplain is to provide religious support to soldiers. They are tasked with the important job of “bringing God to soldiers and soldiers to God.” It is a noble calling and only a few can be able to do it. Chaplains are non-combatant and therefore do not carry/use guns or fight.

ANTOR Christian Church, where Rev. Kihato is the Senior Pastor, is a vibrant Pentecostal Church serving the Kenyan American community living in the South Shore area of MA. They currently hold services at 12 Church St, Rockland, MA on Sundays at 12 PM but are in the process of buying a new facility for which $37,000 has already been raised.

Service to God and the Country: Rev. Carl Philip Kihato Reviewed by samrack on January 1, 2015 .

It is a big challenge to serve in the Military especially if you are a Christian. Only a few in the Kenyan American community living in the New England region have tried. Rev. Kihato is one of them. He joined the US Army as a Chaplain Candidate in April 2007, shortly before relocating from Kenya.