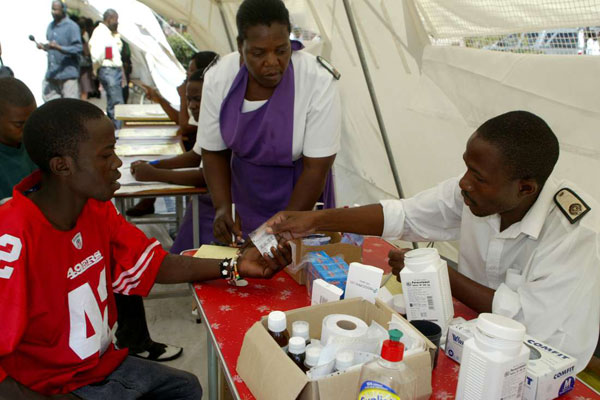 Patients receive medication at a typhoid screening and treatment at a clinic in the Kuwadzana township on the outskirts of Harare on January 31, 2012. PHOTO | JEKESAI NJIKIZANA | AFP

Poor lab capability, surveillance and lack of sanitation are enabling the spread of a typhoid strain that is resistant to drugs, a researcher has warned.

Prof Sam Kariuki, the head of microbiology at Kenya Medical Research Institute, said H58 whose origin can be traced to Nepalese capital Kathmandu was now in East Africa.

H58, an older strain of typhoid causing Salmonella typhi, has edged out other strains to become resistant to more than 60 per cent of locally available and affordable antibiotics.

Laboratories are required to detect it from the other strains found in East and Central Africa.

H58 is potentially fatal because it causes intestinal perforations.

In an interview with the Nation, Prof Kariuki said drug resistance was burdening the health system.

“If a disease is not responding to first line drugs that are cheap, clinicians have to prescribe second and third lines,” he said.

Prof Kariuki raised the concern during a media round table organised by World Animal Protection to discuss the threat of antimicrobial resistance in Kenya.

One can get typhoid from contaminated water or food. Carriers pass the germs in their faeces and urine.

Its symptoms include chills, headaches, stomach aches and constipation.

Due to low suspicion index amongst health workers, the disease is usually misdiagnosed since its symptoms are similar to those of other illnesses common in Africa.

The professor’s concerns come two weeks after researchers at the 10th international conference on typhoid in Kampala, Uganda also discussed the issue.

“With the increase of slums which have poor sanitation, these cases are bound to go up,” the microbiologist said.

The country has reported sporadic outbreaks of typhoid, with isolated cases of drug resistant strains.

In fact, Kenya is classified as hyper epidemic for typhoid, meaning it records many cases that could result in deaths.

H58 has been found in Mukuru Kwa Njenga slum, Nairobi.

Last year, a genetic study of Salmonella typhi analysed the DNA of more than 2,000 typhoid pathogens from Africa and Asia.

According to the report published in the journal Nature Genetics, H58 left Asia and came to Africa in the last 30 years. It landed in Kenya about a decade ago.

Share thisFacebookTwitterPinterestEmailWhatsAppPatients receive medication at a typhoid screening and treatment at a clinic in the Kuwadzana township on the outskirts of Harare on January 31, 2012. PHOTO | JEKESAI NJIKIZANA | AFP  Scientist warns of drug resistant typhoid strain Poor lab capability, surveillance and lack of sanitation are enabling the spread of a typhoid strain