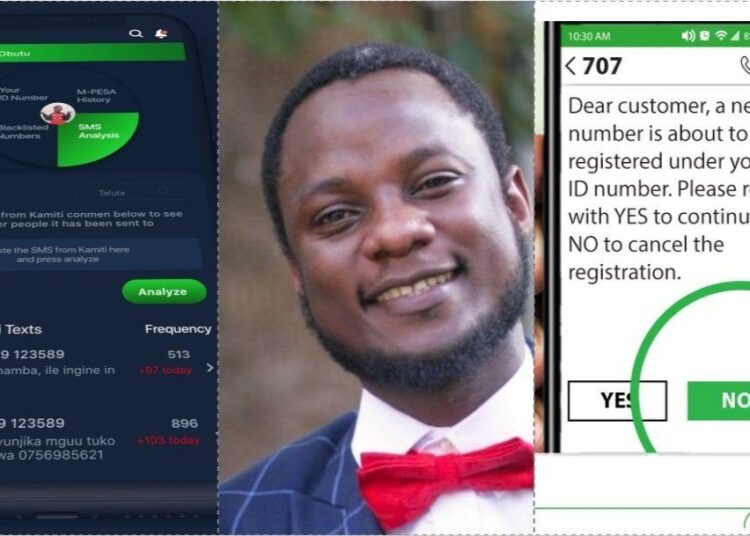 This is a new claim on Safaricom Plc, that it has like in the previous years, stole an idea and implemented it without contacting the owner or sharing the proceeds.

Prisoners in Kenya are part of the cartel that tricks IT systems to steal personal data which is then used to scam more people off their money.

I have been a victim once, where my mother-in-law at home sent me many texts which I found unusual asking me for money. It was a saturday and since I didn’t have the time to ask since I was in church at the time and so, i sent sh1000 to her. She had asked for sh2000 and I had clearly explained that I could only manage sh1000. I got suspicious after she continued asking me for more, despite me sending her sh1000. So I stepped out of the church building and decided to call my wife to ask her why her mum was behaving this way? She promised to call to find out, she later informed me that her mother’s phone had been cloned and that it was under the control of fraudsters and that her father had also sent sh10,000 ($100). To cut the long story short, the frausters made away with over sh20,000 ($200) gotten from different family members.

They do it from prisons because there’s no more fear of the law, ‘they are already in prison’

Yesterday, 15th May 2020, Safaricom Plc launched Tuwaanike a feature that alert customers via text whenever someone tries to register a line using their credentials..

The move is aimed at curbing the menace as I had briefly narrated above. Fraudsters were through Safaricom’s own staff, peole working at the Nairobi Registration Bureau (NRB) or through lost/misplaced documents obtaining details of clients which they used to register new Sim Cards and access MPESA accounts.

Even the COmmunications Authority of Kenya (CA) was hacked at some point and a message sent to mobile phone users that they had exceeded the number of lines registration allowed.

This was works of fraudsters as CA later wrote, it called on the Direcrorate of Criminal Investigations (DCI) to investigate.

Kenya giant telco Safaricom Plc has been accused of stealing a feature that alerts when someone tries to register a new SIM card with your ID number.

Twitter User and innovator Anyona Obutu on April 6th 2020, shared on Twitter how Safaricom Plc can stop the fraudsters from Kenyan prisons who colude with law enforcement and a few rotten individuals from Telco companies to rob Kenyans off their data and scam them and their families.

As per screenshots above, Anyona Obutu has written a comprehensive summary of what his innovation was. He submitted this through Safaricom’s Zindua Cafe platform where innovators are encouraged to submit their innovations to be cosidered by the Telco. Most often the story has been ‘my idea has been stolen, I was neither contacted, not received a cent for it”.

Zindua Cafe portal is the crime spot, teaming with some great innovations by Kenyans, the platform which was launched in January 2015 has had many developers crying foul.

The latest victim of corporate impunity, Anyona Obutu, speakign to KenyanBusinessfeed.com says that after his tweet, he tried checking the portal to see if the idea he submitted still exist, but was shocked to discover that it had been removed.

“I submitted a feature to curb fraud to Safaricom’s Zindua portal (when it used to work, the link is now dead https://www.safaricom.co.ke/zindua/ ). Last month I decided to publish the designs online and a month later Safaricom have implemented the stolen same idea’, Obutu wrote.

KBF asks, if Safaricom has managed to ‘fool’ the public about their new security feature to curb fraud on MPESA and stroke ot from Zindua portal, what prevents them from interefering with patents already held by Kenya Copyright Board (KECOBO)?

Will Safaricom also claim, as they did with MPESA, that the idea was alaready being though of by a mzungu and that other claims are forgeries?

Will Safaricom corrupt its systems, pay watchmen of intellectual property to backdate systems to show that the idea was originally theirs?

The problem with intellectual property protection and copyright in Kenya is that the owners of the institutions of governance are either too reluctant to help or they seem to have been pocketed by Safaricom.

This statement takes me to the last part.

Part 3: Other instances where corporates including safaricom has been accused of stealing ideas

Before I start this chapter, which is the longest, let me begin by defining key terms, and identifying key institutionsmin Kenya in the governance of ideas as pertains to intellectual properties.

Intellectual property referes to the general term for the assignment of property rights through patents, copyrights and trademarks. These property rights allow the holder to exercise a monopoly on the use of the item for a specified period.

Copyright on the other hand, according to Wikipedia, is the exclusive right given to the creator of a creative work to reproduce the work, usually for a limited time. The creative work may be in a literary, artistic, educational, or musical form. Copyright is intended to protect the original expression of an idea in the form of a creative work, but not the idea itself.

In Kenya, we have the Kenya Copyright Board (KECOBO) and Kenya Industrial Property Institute (KIPI). Both are government of Kenya (GoK) agencies.

KIPI is a government parastatal that administers Intellectual Property rights. Whereas, the Kenya Copyright Board is a State Corporation that was established under Section 3 of the Copyright Act Cap 130 of the Laws of Kenya to administer and enforce copyright and related rights in Kenya.

In 2016, a study was launched by the Intellectual Property Watch (IP Watch), a non-profit independent news service that provides professional coverage of global policymaking on intellectual property and innovation.

IP Watch spoke to a few Kenyans, though they were to do a study in partnership with Communications Authority (CA) in 2016 on “how to protect innovators from intellectual property abuses”, I haven’t seen it yet.

Nevertheless, an article by IP Watch titled; Amid Allegations Of IP Theft By Corporations, Local Kenyan Innovators React, revealed that, ‘ that big companies had arrived as “sponsors’, but ended up swindling young innovators. The companies have been entered into partnerships with the innovations, but many have found themselves at a loss once the products are fully developed”.

Experts were concerned that this beahvior would kill innovativeness in the country.

Most of the youthfull, some jobless innovators often show companies their innovation out of goodwill but end up getting shortchanged.

As one drone innovator, a Mr Kelvin Macharia that IP Watch spoke to acknowledged that lack of or little information about how innovators can protect their ideas has led to loss of inventions.

He also observed that firms often trick someone into sharing their ideas, which then when they find that he//she has not patented, they steal.

“There has also been a lot of trickery from the bigger companies, which may have offered funding for the inventions, but turn against the inventor. Many of them are poor bright young people who hope to make a livelihood out of the hard earned inventions,” said Macharia

Some ideas are stolen an improved and to the innovators, this is hard to fight since most of them are poor.

“We have also cases where the innovations are stolen and improved, then introduced into the market. Many innovators lack the capacity follow through in courts since the cost in prohibitive,” adds Macharia.

Problem is, some Kenyans have accused CA of acting like a ‘department inside Safaricom” when it comes to making decisions such as those it says it seeks to protect.

Even as the Kenyan constitution mandates the GoK to support and protect innovators and their innovations, little has been done in that regard.

Some officials accuse innovators of being too lazy doing their ground work as pertains to protection of intellectual properties arguing that they should be their own policemen when it comes to IP.

Corporates too have become too scheming in that some innovators might be pacified by being offered a job, then later realsie that they have been duped off their invention.

There are many other agencies that many Kenyans are not aware of that deal in copyright and IP. Truth be told, I was also not aware of Kenya National Innovation Agency (KNIA), untill I did some research to write this article.

KNIA, acording to online sources, is charged with increasing awareness of intellectual property rights among investors, universities, research institutions and the general public.

Anyways, below are some instances where corporations are accused of ripping off inventions from the hands of gullible, sometimes clueless and sometimes just plain unlucky inventors in Kenya. Either, way the end rsult is criminality that stifles innovation.

There are numerous cases of intellectual property thefts by Kenya telcos, some are covered below:

Through its Zindua Café Program, where innovators are encouraged to submit their ideas to the Telco, Safaricom Plc has been accused of (i), ‘lifting’ the MPESA Thibitisha idea (the system’s way of discouraging sending money to wrong recipient), (ii) the reverse call idea, and the (iii) MPESA 1-tap idea (where people purchase products by card or a wrist band.

A microfinance at that time, Faulu Bank accused Safaricom of stealing their ‘M-shwari’ idea too in 2012. Mshwari is the lednign arm of Safaricom in partnership with NCBA bank.

Equity Bank was also accused of stealing the ‘wings to fly’ song from a Eric Obiero Nyadida. Eric sued the bank for Ksh10 million.

Integrated Payment Services Limited which runs the Pesalink platform which Kenyan banks use to do bank-to-mobile phone money tranfers is also acussed two IP thefts, (i) stealing the whole idea and also of stealing an e-Receipt idea.

On the e-Receipt the argument is based on protecting innovations through Utility Models.

Once more, behold, the Innovation that has been stolen by Safaricom Plc

Moving forward there will be zero MPESA fraud

Your national ID is the unique identifier, you should get an alert on your primary number each time your ID registers a new simcard 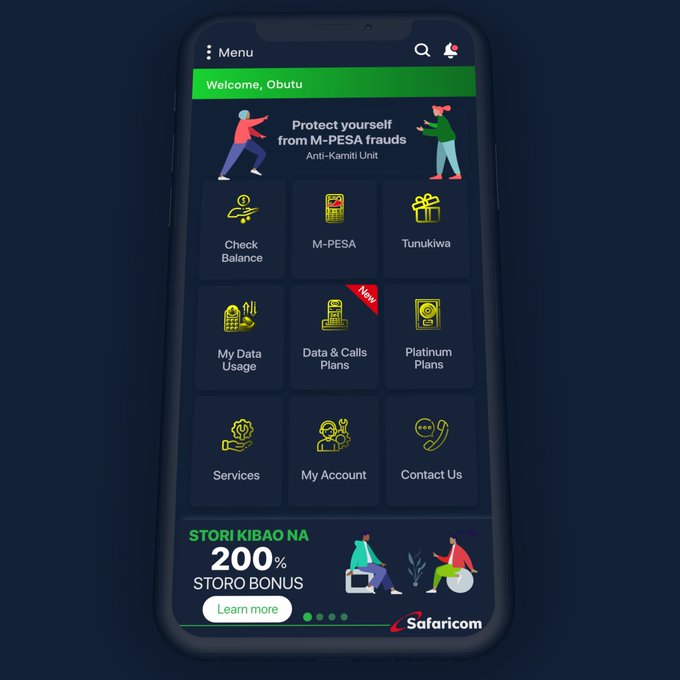 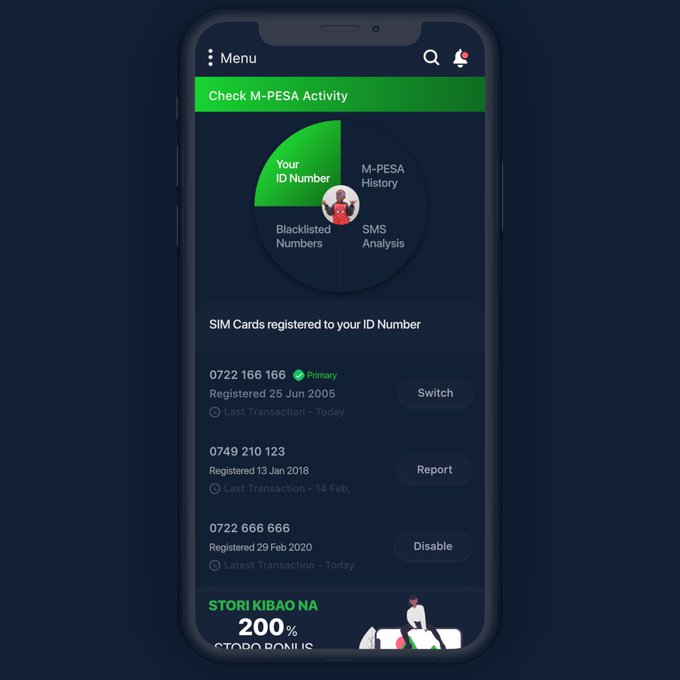 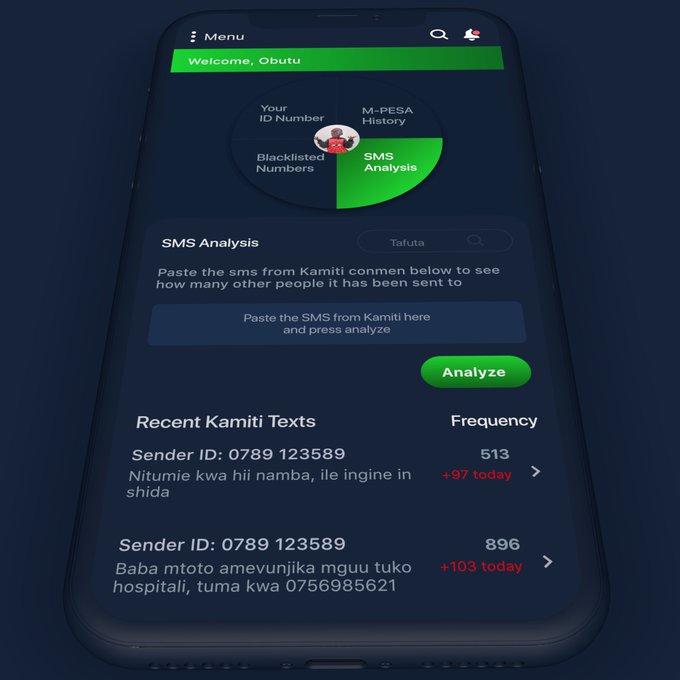 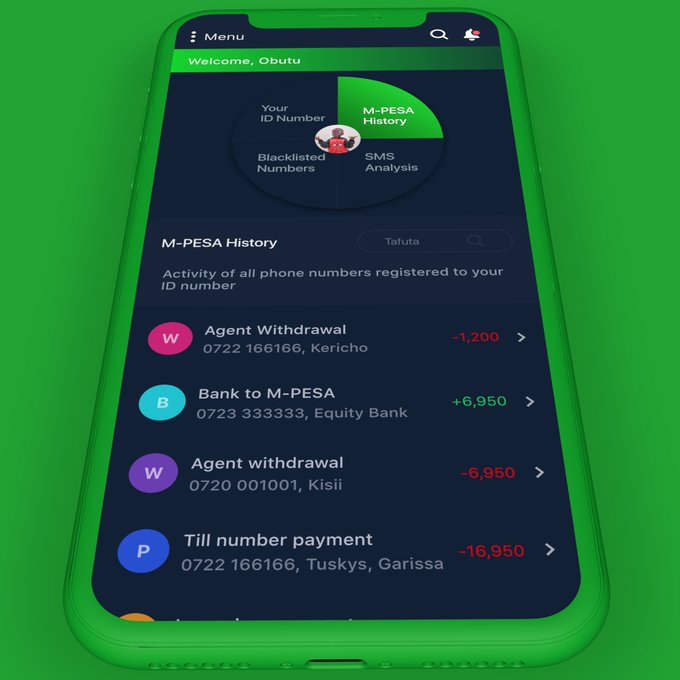 It should be possible to send a deactivation request from the app, or report all phone numbers registered to your ID that you have no idea who registered them #lockdownKenya #MPESAFraud 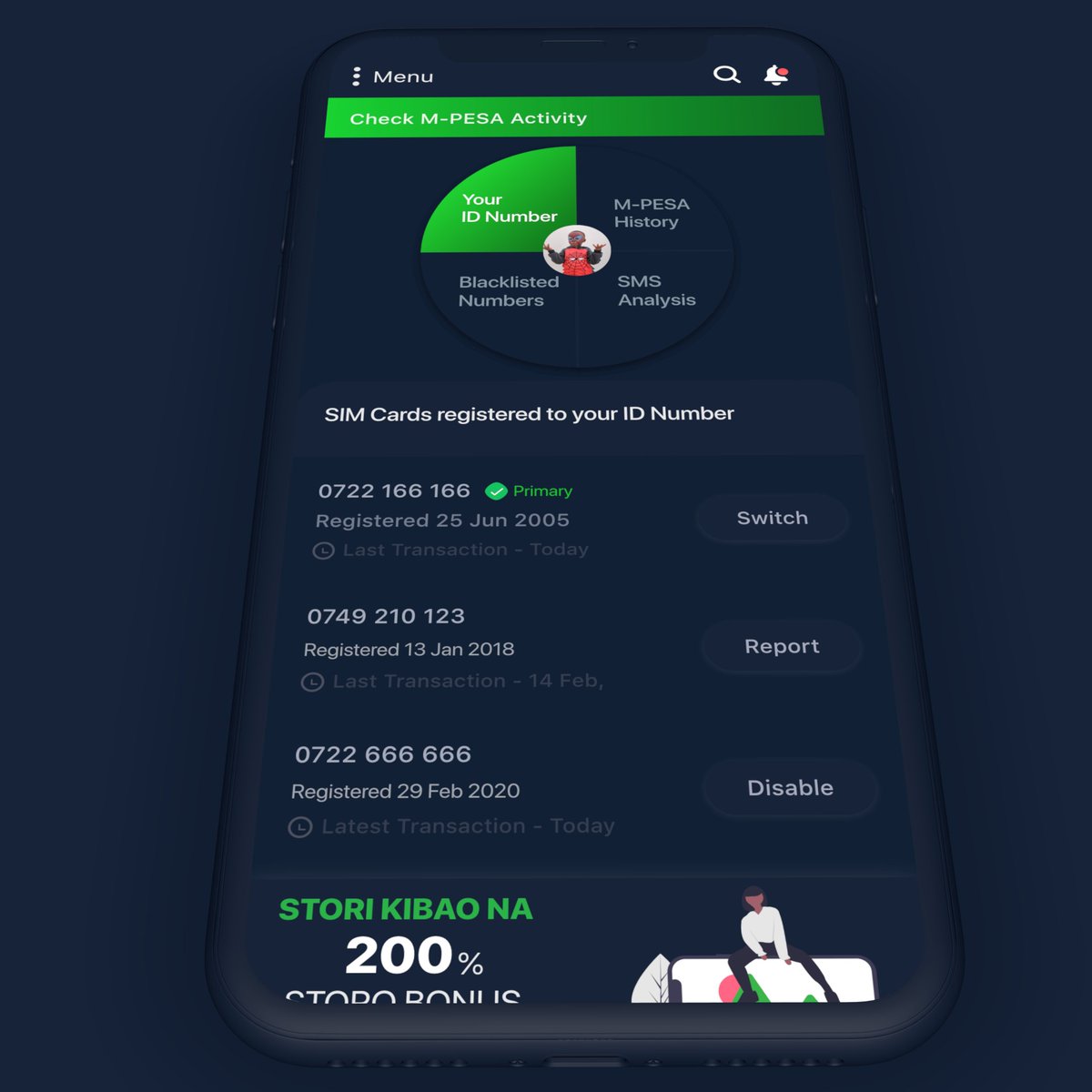 Safaricom accused of stealing a patented idea Reviewed by samrack on May 16, 2020 .

Safaricom accused of stealing a patented idea Part 1: Intellectual Property theft This is a new claim on Safaricom Plc, that it has like in the previous years, stole an idea and implemented it without contacting the owner or sharing the proceeds. Prisoners in Kenya are part of the cartel that tricks IT systems to