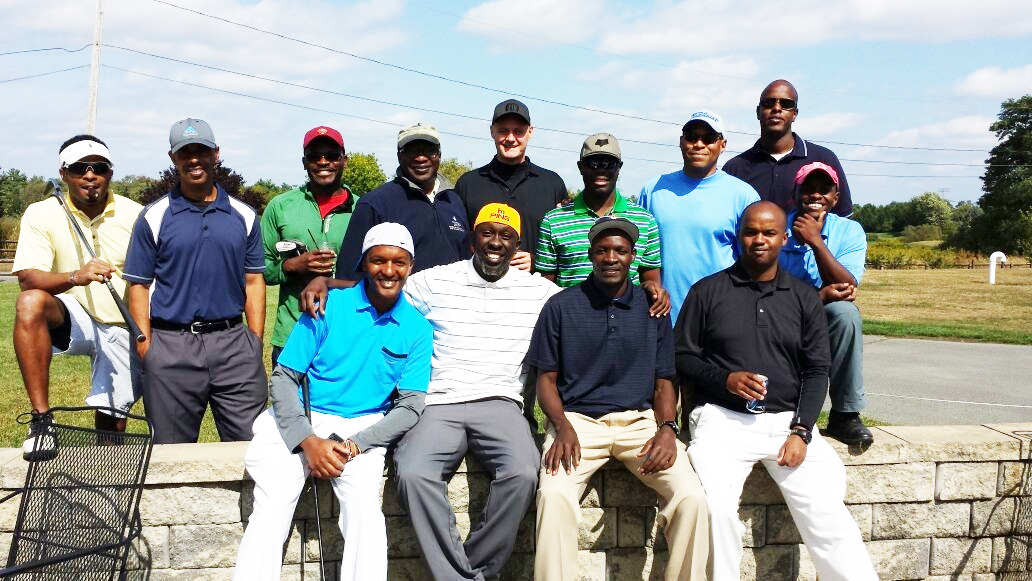 Safari Boston Golf Club is a golf networking services organization located in NE Bringing Golfers together to have fun & engage the golfers to fundraise and contribute to the society’s wellbeing.

Safari Boston Golf Club 1st annual Golf Tournament featuring a diverse group of various nationalities took place at Pembroke Country Club on September 7 2013. This year’s tournament is named as the ‘Safari Boston Golf Championship’ after the name of the club. The golf tournament consisted of threesomes and one foursome. The tournament will be held each year. It turned out to be the most famous golf tournament held in New England’s larger Boston area amongst diaspora Kenyans. Even though the tournament itself is not very old and is right in its infancy stages, it has taken off and launched a very eventful history that will play an important role in shaping many Kenyan American golf legends. Our committee has grown from the original 2 co-founding  members (Tony Ngari & Francis Kibugi) to more than 20, the number of participants, and we are well placed to be one of the largest of New England’s Kenya diaspora Golf Tournaments annually.

Players at the event were fired up, with many Kenyans, & Haitians — a noteworthy beginning of camaraderie, celebration, and pioneering.  Safari Boston Golf Championship is the first of its kind in the New England & larger Boston area amongst Diaspora Kenyans. Safari Boston Golf Club hopes to grow this tournament to benefit various charities in the future.

Participants in the tournament started their morning with an informative and entertaining Skills Clinic featuring our one and only Pro Francis Kibugi and a guest appearance by the mother of the owner of the Pembroke Country Club, followed by a chipping contest before teeing off. After the tournament, Tony Ngari the Co- Chairman of Safari Boston Golf Club visited each player personally and handed each player an autographed golf ball, and posed for a photo opportunity. Saturday was a fun event for everyone. “We just thought it was really important and something cool to do,” one of them said. There were lots of pictures, autographs, old stories and some good putts. Even patrons of the Pembroke Country Club got putting lesson from William Emase.

A fun fact from the tournament: Chris Esikumo actually doesn’t even own a full set of golf clubs. The only golf he plays is with a putter on the greens.

According to Francis the man who once shot a final round 78 to win the Brookline Big Bang Invitational on 6/29/2013 and also the Safari Boston Golf Champion 2013, “When it comes to striking the ball, a high quality swing matters, and goes a long way to make a difference in your score,” Francis said. “It truly feels like a miracle, once you start hitting it that well.” Lawrence Kimama the Longest drive award winners voluntarily offered golf driving lessons while Pedro Belizaire the Closest to the pin Champion talked about his phenomenal year in golf having won his 2ndclosest to the pin award this year.

After a day of golf, participants gathered for an awards lunch, to celebrate the winners and camaraderie, while enjoying a heartfelt presentation by the winner Mr. Francis Kibugi, Runners up Kiruthi Njenga and 3rd place William Emase on the value of proper mental preparation to play competitive golf and the importance of taking time for family and friends. The Trophy presentation was coordinated by the Tournament’s director William Emase assisted by the Treasurer Freddie Chege & Tony Ngari.

Safari Boston’s Co-Chairman Tony Huria Ngari. “We wanted to put on an event that’s enjoyable, with a projected plan to also give back to charity in the future. This event certainly will accomplish both goals going forward.”

“The tournament looks to get better with each following year due to the amazing support from participants, championship management & tournament organizing team and hopefully local businesses in the future,” said Tony Huria Ngari, Co-Chairman/CEO of Safari Boston Golf Club and honorary Co-Chair of the tournament. “We look forward to seeing everyone again this  year September 2015  for another  wonderful cause.”

Thank you to all of our participants, sponsors, and donors who made The 1st Annual Safari Boston Championship golf tournament a success. It is with pride and gratitude that we celebrate our 1st annual event and invite you to share in our continued success.

“We are thankful for the support of our volunteers, players and sponsors who contributed to our goal,” said Tony Ngari, CO – Chairman and CEO of Safari Boston Golf Club.