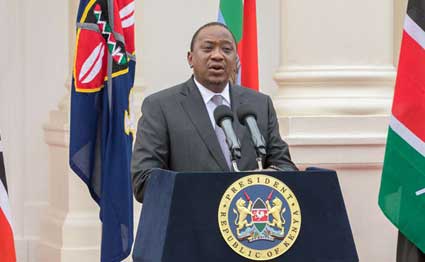 Ruto hits back over claims of split with Uhuru on Cabinet

Deputy President William Ruto on Sunday dismissed reports of a dispute between him and President Uhuru Kenyatta over the selection of the Cabinet.

Speaking for the first time since the President announced major changes in his government line-up on Friday, Mr Ruto said speculations about differences between him and the Head of State were baseless.

“Kenyans, more so Jubilee, should avoid useless political debates about positions including 2022 and focus single-mindedly on delivering our manifesto voted for by the people,” the DP said in a tweet sent from his verified account at 3.24pm.

He asked Kenyans to give President Kenyatta the space he needs to do his job and to assemble a team that he hopes will help him implement his agenda in his final term to secure his legacy. Mr Ruto also suggested that it was the President’s sole mandate to select the nominees, saying: “We should allow the President to assemble the team for us.”

Mr Ruto’s absence at State House when President Kenyatta announced the changes sparked speculation that he was opposed to the line-up, which saw 13 Cabinet secretaries dropped, six retained and three new ones appointed.

Unofficial reports indicated that Mr Ruto’s close associates were kept in the dark about the selection even as Jubilee Party vice chairman David Murathe suggested that President Kenyatta was carrying out his mandate of selecting the potential Cabinet secretaries.

Mr Ruto is understood to have arrived back in the country on Friday morning from a trip to India.

The Friday announcement was a departure from 2013 when the Jubilee duo did the announcement together with all media houses invited. On Friday, President Kenyatta read the changes alone and only the national broadcaster KBC was invited to the event. This led to speculation that all was not well between the two.

President Kenyatta’s announcement was also puzzling because he did not speak about the fate of the Cabinet secretaries he had dropped and did not state the portfolios the three new men would be assigned to.

President Kenyatta’s second-term Cabinet will be crucial in securing his legacy besides creating circumstances that should pave the way for Mr Ruto to succeed him and continue carrying out Jubilee’s agenda.

On Saturday, Nyeri Town MP Ngunjiri Wambugu reignited debate on the DP’s 2022 chances, saying he disputed Gatundu South MP Moses Kuria’s assertion that the Mount Kenya region will not ‘betray’ the DP and will vote for him as part of a 2013 deal in which President Kenyatta would rule until 2022 and be succeeded by the DP.

“In 2022 my vote will not depend on betrayal or paying debts; there’s no such thing in politics,” said Mr Wambugu on Facebook, triggering a furious online debate, with most commentators concluding that he was referring to the DP.

Mr Kuria attended a church service in his Gatundu South constituency and reiterated his stand that the region will back the DP in 2022 when he runs for president.

And when the DP tweeted that Jubilee leaders should focus on carrying out Jubilee’s agenda and not the 2022 politics, Mr Ngunjiri said he agreed with him, adding that it was premature to begin debate on 2022 politics.

“I hope all those who have been going around purporting to speak on behalf of others, about how we will vote and who we will vote for in 2022, have taken note,” Mr Ngunjiri said.

Though Senate Majority Leader Kipchumba Murkomen said that the Cabinet to be formed will boost Mr Ruto’s chances in the race for the presidency if it performs, he warned against the succession talk in the appointments.

“If Jubilee delivers, it will not matter whether or not the Deputy President had a hand in the appointment of the Cabinet secretaries. He will still be an automatic beneficiary when he runs for the top office in 2022,” Mr Murkomen said in a previous interview.

Meanwhile, Kenyans will this week know what portfolios the new nominees — Mr John Munyes, Mr Ukur Yattani and Mr Keriako Tobiko — have been assigned after President Kenyatta sends their names and credentials to Parliament for vetting.

National Assembly Majority Leader Aden Duale said he had been informed that the names will be submitted to the House on Monday.

Also included will be the nomination of former State House Comptroller Lawrence Lenayapa as Kenya’s ambassador to the Netherlands.

“They have to include the portfolios. The questions they will be asked will be about how they will perform in their ministry,” said Mr Duale.

After the names are submitted, Parliament will then ask for the views of the public on the nominees. The views should be in the form of sworn affidavits and should be submitted in seven days.

The Committee on Appointments will then have a day to review the memoranda from the public and then invite the nominees for a public hearing where they will be questioned by MPs.

There will then be a special sitting for the House to debate and approve or reject the report of the committee.

However, given that the opposition has refused to name its members to the Committee on Appointments, it should be smooth sailing for the nominees.

Ruto hits back over claims of split with Uhuru on Cabinet (Video) Reviewed by samrack on January 8, 2018 .

Ruto hits back over claims of split with Uhuru on Cabinet Deputy President William Ruto on Sunday dismissed reports of a dispute between him and President Uhuru Kenyatta over the selection of the Cabinet. Speaking for the first time since the President announced major changes in his government line-up on Friday, Mr Ruto said speculations