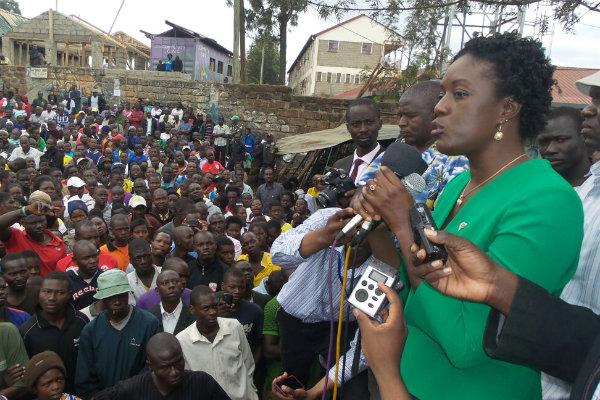 Rosemary distanced herself from the Monday incident, in which youth from Kibera and Mathare burned down clinics, toilets, water tanks and pipes during a demonstration.

The Kibera MP aspirant instead urged the youth to march to Nyayo house and push to be issued with ID cards.

She claimed some officials at Nyayo house had declined to register Kibera residents and said she will personally monitor the process.

The youth were protesting an attack against Cord leader Raila Odinga by pro-Waiguru youth on Monday which angered them.

“We were told to march to the CBD to ask for an increment in payment and an extension of the projects in Kibera, only for the youth to attack Cord Leader Raila Odinga,” one said.

The rioting youth carried placards and barricaded major roads in the slum while chanting anti-government slogans and involved the police in running battles, making it hard for the officers to contain the situation.

The director of Digital, Innovations and Diaspora Communications, Dennis Itumbi who toured the slum, said though some partners had not fulfilled their obligations, but the NYS had “done its job.”

Itumbi said NYS had caused “transformation in every part of this country”, by funding projects including construction of Posho mills, toilets, police stations and clinics.

“Those we spoke to explained that the Ablution blocs, just like the Posho Mills, had an initial problem, because despite NYS doing their job, Nairobi water took time to supply water, the issue was resolved recently after persistent pressure from the community and the Ministry of Devolution too,” Itumbi said.

“There is then a Fish Ponds project in Kibera. An interesting perspective to the whole project is that NYS was encouraging food security as an income generating project. In Mathare we found that instead of Fish ponds, the youth were doing poultry projects.”

Itumbi’s remarks come in the wake of calls by Cord leader Raila Odinga to suspend CS Waiguru and establish a probe into possible fraud in the Devolution ministry.

Share thisFacebookTwitterPinterestEmailWhatsAppRosemary Odinga on Tuesday visited Kibera slum after youth burned down projects initiated by the National Youth Service. Rosemary distanced herself from the Monday incident, in which youth from Kibera and Mathare burned down clinics, toilets, water tanks and pipes during a demonstration. The Kibera MP aspirant instead urged the youth to march to