Dr Leakey, the and Kenya Wildlife Service chairman, said the land fill in front of Fort Jesus, being done by the National Museums of Kenya, was wrong.

“It is sad that this project has gone as far as it has and indicates that both the Ministry of Culture and National Heritage and the National Museums of Kenya are totally failing in their mandate and must be held to account by our government,” he said in a statement.

Ironically, NMK, which is supposed to be custodian of Kenya’s heritage, has vowed to go on with the reclamation of the sea despite Mr Joho and Prof Swazuri storming the site of the Sh498 million project last Thursday and ordering that the project be stopped.

NMK had applied to build a wall to prevent the sea water from destroying the foundation of Fort Jesus.

Already, the United Nations has warned that Mombasa could be delisted as an island due to reclamation of the sea. 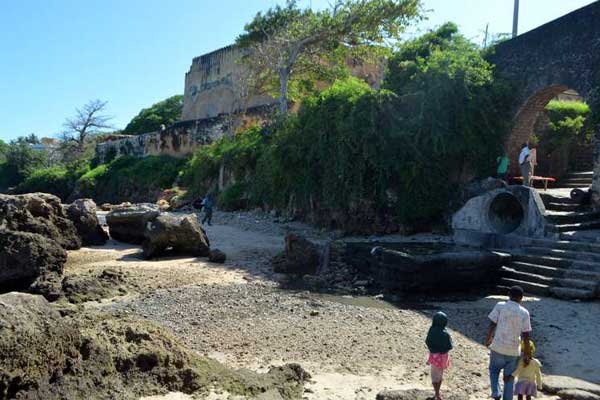 According to Mr Joho, the wall being done by NMK encroaches into about two acres of the ocean and has also blocked a public path to the sea.

Mr Joho and Prof Swazuri said NMK was reclaiming a two-acre parcel against an application it made to erect the wall.

But on Friday, NMK Director-General Mzalendo Kibunjia said the construction will go on according to plan.

Prof Kibunjia explained that part of the space that Mr Joho had indicated was being reclaimed would be used to put up a cofferdam.

A cofferdam is the watertight enclosure which is built to allow construction work below the waterline, as when building bridges.

Fort Jesus, Dr Leakey noted, is an international landmark, “recognised as a Unesco World Heritage site and as such, cannot be altered, defaced or violated.”

“Many years ago, my late father and others persuaded the government to remove the monument from being a prison and over the years massive funding enabled the National Museums to restore it as a faithful icon to history,” he said.

“One’s common sense, let alone the Kenya and intended law, does not permit what the current National Museum administration is attempting.

“I can only presume that the effort is tied to money and selfish, perhaps questionable, deals. The Fort must be maintained as it was built over 500 years ago. If the sea is causing real damage, experts exist in Kenya and through international conservation bodies to make the repairs and preserve the fort’s integrity.

“I congratulate the governor and the National Land Commission chairman and urge that in addition to halting the reckless project, they should arrange for a full investigation to be done, which could lead to further actions against the perpetrators.”

Prof Swazuri expressed concern that sea walls had been constructed in various areas along the Coast line, adding that ecological sensitivity of the area will not allow it to be reclaimed.

He also warned private developers against reclaiming the Indian Ocean.

Prof Swazuri said he will stop any illegal development at the Ocean.

“I was told the reclamation behind Fort Jesus was to create a recreational zone. Reclamation of land is similar to land allocation and ocean waters are part of public land. Ordinarily an application should come to NLC, that is what the law says,” he said.

“Under the Constitution, the NLC and other government agencies are supposed to protect ecologically sensitive areas and that is one of them. Whatever development that is being done must adhere to conservation principles as laid out by the Constitution and the land laws of this country,” he added.